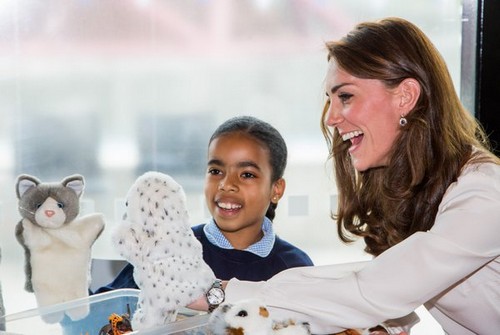 Kate Middleton along with Prince William and Prince Harry arrived at Olympic Park on Monday, March 16 to launch the Heads Together. The campaign has been started to bring additional awareness to unresolved mental health issues.

The Duchess of Cambridge visited a Boxercise demonstration put on by Mind Charity. The purpose of the demonstration was to show that physical wellbeing is crucial for mental wellbeing. Kate put on boxing gloves and through a few punches for the cameras.

Another activity Kate Middleton participated in was testing the new Baby Buddy app which helps support parents through pregnancy and beyond. The app is available for a free download to residents in the United Kingdom. There is also a version for web use on the Best Buddy website.

The Duchess of Cambridge does boxercise at the #HeadsTogether launch event Mind charity – one of the 7 #HeadsTogether charities – is promoting the benefits of physical activity for mental wellbeing.

The Duke of Cambridge visited The CALM Zone sponsored by CALM – Campaign Against Living Miserably. The purpose of the organization is to bring awareness to the suicide rate for men under 45 in the United Kingdom – it is the single biggest killer. Prince Harry spoke with veterans regarding their mental health issues.

Harry then participated and in a game of mental health Jenga at the Young Minds which is the United Kingdom’s leading charity committed to improving the emotional wellbeing and mental health of children and young people. Prince William, Kate Middleton and Prince Harry then gave a joint speech at the Heads Together event in which several charities participated. Part of Kate’s speech included her wish that “everyone feel much more comfortable with their everyday mental wellbeing.”

The Duchess of Cambridge went on to say, “Fear and prejudice and judgment stops people from getting help and can destroy families and end lives.” Part of William’s speech asked, “Let’s all get our heads together and change the conversation on mental health forever. Let’s put an end to the silence and replace it with optimism – with support and understanding.” “We want to build on the great work that others are already doing, but make it even more ambition,” Harry stated.

The entire transcript from Kate Middleton, Prince William and Prince Harry’s launch at the Heads Together event can be found on the Royal website. Come back to CDL for more Royal news and reports

Catherine, William and Harry arriving at the Olympic Park to launch the Heads Together campaign. 16th May, 2016 A photo posted by Prince Harry Of Wales ♔ (@hrhprinceharryofengland) on May 16, 2016 at 4:28am PDT