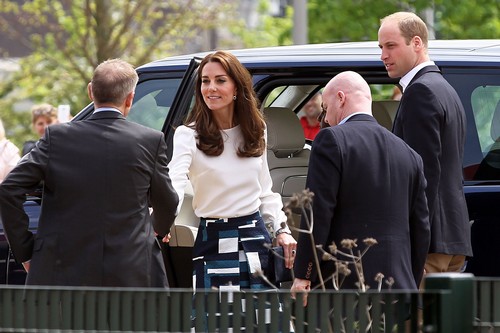 Kate Middleton and Prince William’s PR crisis is getting worse by the day. One policewoman, Sarah Hamlin, responsible for protecting the Duke and Duchess of Cambridge has dramatically quit, which has no doubt left Queen Elizabeth furious once again.

Kate Middleton and Prince William have dealt with a string of bad press this year, which includes their less than stella India and Bhutan state trip in April, Kate Middleton’s pricey helicopter rides and out-of-control spending habits, and of course their multiple family vacations with their children, Prince George and Princess Charlotte.

If that weren’t enough, Prince William and Kate Middleton have done very little work in regards to their royal engagements, unlike Prince Harry, who has so far had a very successful year in the public eye.

And now, Kate Middleton and Prince William have been struck with another PR crisis as policewoman Sarah Hamlin, who has been responsible for the royal couple’s safety for years now, dramatically quit her job with a Twitter outburst.

According to The Mirror, Sarah Hamlin complained that she could “no longer make a differences” and that her values “no longer fit” her position at the Norfolk Police Department. She tweeted, “After 30 years @NorfolkPolice I’ve resigned to the fact that my values no longer fit the org. I can’t make a difference, support front-line. And so I wish colleagues & friends all the best. Let’s hope policing can recover & the officers & staff welfare is prioritized.”

Clearly, Sarah Hamlin’s resignation indicates that protecting a royal couple like Kate Middleton and Prince William comes with very few benefits and more stress than some are willing to handle. As a royal protection officer, there’s no doubt that Sarah Hamlin’s job was less than rewarding, especially seeing Kate Middleton and Prince William take several holidays a year while she made huge personal scarifies working to protect them.

Still, Sarah Hamlin’s public tweets definitely has Queen Elizabeth fuming. The last thing she needs is more negative press about the British royal family and especially, Prince William and Kate Middleton, who are doing more damage than good to their royal reputation.

Sarah Hamlin makes it sound as though her job protecting the royals was unbearable because after all, no one wants to be a glorified servant for the Duke and Duchess of Cambridge, much less anyone else in the royal family.

Tell us CDL readers, what do you think of Sarah Hamlin’s dramatic resignation? Is this even more bad news for Queen Elizabeth and Kate Middleton and Prince William for that matter, too? Come back to CDL for all your Royals news every day!

After 30 years @NorfolkPolice I’ve resigned to the fact that my values no longer fit the org. I can’t make a difference, support frontline.