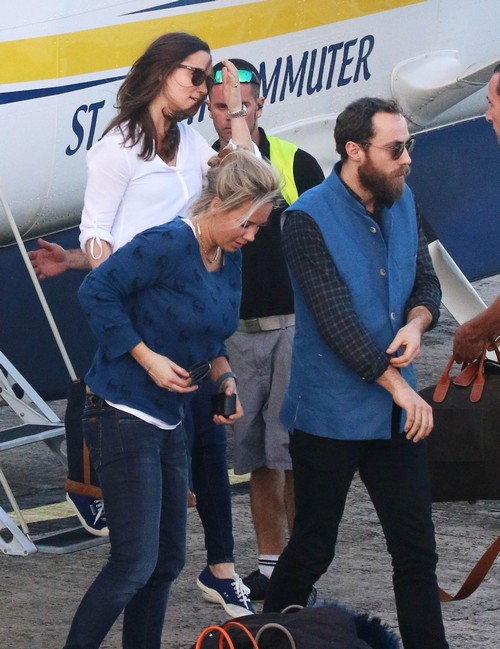 Will Kate Middleton be upstaged by Pippa Middleton again? Is Pips following Carole Middleton’s orders and targeting Prince Harry for marriage? The feud shaping up between the Duchess of Cambridge and younger sister Pippa may have hit an all-time high as the Middleton matriarch tries to manipulate another Royal romance.

Does Duchess Kate believe Harry and Pippa are vacationing in the Caribbean together at this very moment?

As previously reported, Pippa arrived in St. Barts with James Middleton on New Year’s Day. By private plane no less. After Pips and James were photographed at the airport Royal watchers started wondering, “Where’s Prince Harry?” There haven’t been many sightings of the fifth-in-line to the throne since Christmas.

Where is the handsome bachelor prince? Did he sneak off to St. Barts right after the Christmas festivities at Sandringham? Please, tell us that Prince Harry isn’t going to propose to Pippa while the two are secretly vacationing on the tropical Caribbean island.

Imagine Pippa’s Royal wedding! Even though Prince Harry was jokingly called “the spare” until Prince George came along, it’s not as if Queen Elizabeth would deny her grandson a lavish wedding.

And you better believe if Carole Middleton snags another Royal son-in-law it’s going to be a grand wedding at Westminster Abbey. St. Paul’s Cathedral or St. George’s Chapel at Windsor Castle for Pippa!

There have always been whispers that Kate Middleton secretly hoped Prince Harry and Pippa Middleton would find love with each other. Unconfirmed Palace insiders do believe that after much thought Duchess Kate thinks Chelsy Davy would be a more appropriate bride for brother-in-law Harry.

Chelsy prefers to remain in the background and not attract a lot of attention. Duchess Kate has quite grown to enjoy the spotlight and doesn’t wish to share it with anyone.

Pippa Middleton is in love with fame – and being married to Prince Harry would bring Pips a lifetime of Royal stardom. Or would it? Carole Middleton may think the public will adore Pippa, but Mrs. Middleton may want to read up on Sarah Ferguson’s disastrous history as the Duchess of York.

Pippa and James Middleton play some tennis while vacationing in St. Barts on January 3, 2015. The siblings are enjoying some time in the sun to bond during their annual New Year break to the Caribbean.

James & Pippa Middleton are seen arriving in St. Barts with friends on January 1, 2016. Rumors are swirling that Pippa is dating Prince Harry. FameFlynet