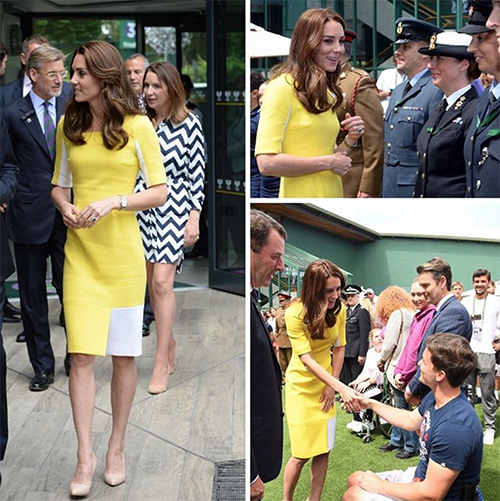 No Wimbledon wardrobe malfunctions for Kate Middleton! Yellow isn’t really the Duchess of Cambridge’s color, but at least the summery dress, a Roksanda Ilincic design first worn during Kate’s visit to Australia in 2014, was an appropriate length.

You’ll remember that Pippa Middleton wore a dress that was much too short and pulled and tugged on the dress all day long while in the Royal Box at Wimbledon. Later in the day, Pippa crossed her legs and the world almost got to see way too much of Pippa’s lady bits.

Kudos to Kate! The yellow, just-above-the-knee dress, which zipped up the back, had an odd white color block on the sleeves and one side of the skirt. But at least it was appropriate. One eagle-eyed observer noted that Kate carried a white handbag. Why would this be something to note? Kate usually has a clutch but rarely adds a handbag to her ensemble.

Kate’s wardrobe malfunctions have been numerous and infamous. Royal watchers have seen enough of the future Queen’s bare bottom. Even though the dress was recycled, we wonder if someone has finally decided to sew small weights into the bottom of her skirts and dresses?

Has Kate finally learned a few fashion lessons? What are they? Wear a skirt of appropriate length, don’t wear a dress that can blow up over your head unless you have your seamstress sew some little weights into the hemline, and don’t wear anything sheer without a brassiere.

There seemed to be a change in Kate at the Art Museum Awards the night before. The Duchess of Cambridge wore a clingy off the shoulder cream-colored gown. Surprisingly, Kate looked sexy and comfortable in the knit dress by Barbara Casasola, which she paired with blush pink suede Schutz stilettos.

If Kate Middleton would stick to colors that compliment her skin tone – royal blue, vibrant red, and cream colors – she may someday be a fashion icon.