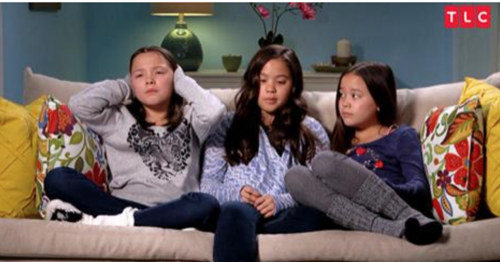 Tonight on TLC Kate Plus 8 returns with an all new Tuesday, November 29, season 5 premiere called, “Sextuplets Turn 12!” and we have your weekly Kate Plus 8 recap below. On tonight’s episode as per the TLC synopsis, “In the season premiere, the sextuplets’ 12th birthday is highlighted by a scavenger hunt that includes clues for their party.”

On the season premiere of Kate plus 8 Kate is getting ready the six youngest kids 12th birthday. The family has also added two new puppies to the house. Maddy and Hannah are taking care of the puppies. Maddy says “The puppies like to fight each other.”

Kate is struggling to plan a scavenger hunt for both the boys and girls. She is in the garage trying to figure things out and keep the kids out in order to keep it a surprise. Later that day she takes Maddy and Cara shopping with her to help get decorations for the party. Cara says “She didn’t ask for our help, she more like demanded it.” While they are out Kate becomes frustrated because the girls just can’t seem to agree on decorations for the party at all. Kate says “Typical shopping trip with the girls. Cara wasn’t interested and Maddy was.”

On the day before the party, Kate, and the two older girls are trying to decorate. Kate is completely frazzled. She is trying to handle everything in the house as well as going to Gaza Works to actually decorate the place for the party. Kate says “I was trying to let Maddy do her own thing. I just wanted everything to be ready.” Cara is not interested in decorating at all. It takes them awhile to get everything done. Kate is trying to direct the girls about the directions.

On the morning of the party, Kate introduces Andrea and tells them “She will be driving the boys and I will be driving the girls.” While she is talking to the children she realizes that she has forgotten to hide the second clue in the DVD. She quickly gets the children into the backyard and hides the clue then gathers everyone back together to start the scavenger hunt.

The girls are quick to figure out that they are going to a beef jerky food truck to obtain the second clue. Kate says “Since there were more girls than boys I tried to make it fair by giving the boys a head start.” Since the girls had already figured out the clue.”

When the girls got their second clue they immediately figured out that they were going to one of the girls parents businesses. When they get there the boys are already there. There is a lot of excitement. The boys think they are in the lead, but the girls tell them “We are already on our second one.” The boys are shocked to hear this.

As the scavenger hunt continues the girls have pulled ahead of the boys. The next stop for the boys is planet Nails. There they have to each have a red x painted on their nails and wait for it to dry before they could move on. Meanwhile, the girls are at the Jerky place enjoying their snack. Kate says “I am in no rush. I am just relaxing.” The boys have finished at the nail shop and are now on their way to their next destination. When the girls get their next clue they have a little trouble figuring it out, but once they do they are off and running to planet nails. Meanwhile, Andrea is driving the boys to the clown location. They find the clown outside an Autospa and take their picture with him and get their next clue.

Once the girls get their nails painted they are having trouble with their next clue. The girls are also panicking that the boys are going to beat them. All of a sudden Hannah has an aha! moment and asks “What is that?” She spots the clown and they get their next clue which leads them to Kid Cuts. Kate says “We had been making fun of the boys thinking that they would be stopping and having a snack and just relaxing.”

Ironically that is exactly what the boys are doing. The girls get their final clue and figure out that the party is at Goggle Works. The girls are excited thinking that they have won and urge Kate to hurry to Google Works. Kate tells them “Nope I can’t until you finish the hunt.” The girls find the phone book and the final clue. Meanwhile, the boys are at the hair cutting place getting their final clue. The producers asks them “Have you ever used a phone book before?” They all shake their heads no. The race is on to be the first to get to Goggle Works.

Kate is driving too slow for the girls. They desperately want to beat the boys. Kate tells them “I need you to be as quiet as possible in order for us to get there.” The boys arrive at Goggle Works first and win the scavenger hunt. At first, when they get to the place the girls thought they had won. Unfortunately, when they see the other car they realize they have lost. They are disappointed, but Kate tells them “Inside you can think what you want, but outside you congratulate them and tell them nice game.”

There are all types of things for the kids to do at the party including a photo booth, a dress up booth for the girls, and a money booth. Kate says “A photo booth and a dress up booth are fun, but they don’t compare when you have a money booth.” Maddy says “I ran the prize table. They all did really well, especially when they cheated. They all wanted to count their money on the prize table so it turned into me counting money because 12-year-olds can’t count.”

Eventually, they shut down the money booth to go and break open the pinata. Kate says “Pinatas are a tradition. This year was a bit of a challenge because this one was really heavy and there was stuff that could’ve really been broken.” The kids bust the pinata and the free for all scramble for candy and prizes begins. Maddy says “I wish they would clean up their room that way.” After the pinata they did ice cream and cake. Kate was a little sad at this part. She says “It was a little sad that Collin wasn’t there, but I was comforted by the fact that my kids all have what they need and they were happy and healthy.” The producer asks them “Where does this birthday rank on your list?” One of the girls says “At the top. I said that last year, but yeah definitely at the top.” Kate says “I have to top this party next year. I have a whole year to think about it though.”