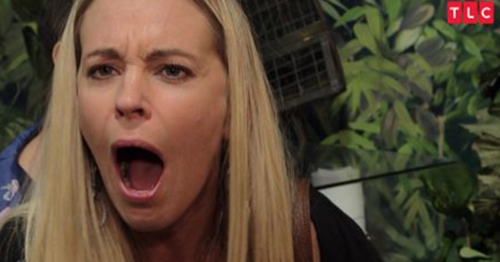 Tonight on TLC Kate Plus 8 returns with an all new Tuesday, December 13, season 5 episode 3 called, “Puppies & Poconos” and we have your weekly Kate Plus 8 recap below. On tonight’s episode as per the TLC synopsis, “A trip to New Orleans introduces the Gosselins to the city’s rich culinary history and Southern etiquette.”

On this week’s episode of Kate plus 8 Kate and the kids are packing up for a trip to the Poconos. This time they are taking along Cara and Hannah’s friend Miley. They are also taking along the two new puppies on the trip. Chaos ensues before the family even leaves the house as they nearly forget the dogs.

When they get to the house chaos once again ensues as everyone tries to figure out where they are going to sleep. They are also trying to bring in the luggage. Kate says “We got as settled as we could, but the kids were anxious to go down to the lake and do the random water activities.” When they get down to the lake Kate’s frustration seems to escalate. She is watching the kids play. She says “I have to lifeguard. The one who can’t swim has to lifeguard.” The kids all have a great time though. In addition to swimming, canoeing, and other water activities they also manage to get in a little fishing. Kate says “They should sleep well tonight.”

The next day the kids are taking the puppies out before they head out to have fun. The boys say “We had the puppies and bringing them along made everything so hard.” After dealing with the dogs they got ready to go horseback riding. When they get to the place they had to learn a whole new way of riding than they were accustomed to. Kate says “They made it alot harder than it had to be.” After a little while everyone seemed to get the hang of it except for Joel. Kate asks them “Who wants to keep riding and who wants to go back?” Three of the kids decide that they want to go back so Kate sends them back on their own to have lunch while she kept riding.” Kate says “We have only ever been riding out west so it was nice to have some different scenery to look at. Eventually, everyone heads back. When they finish the ride they give the horses snacks.

After going horseback riding they go home to check on the puppies and discover that they have made a mess inside their crates. Kate asks Aiden “Can you take the puppy outside so that I can clean up his crate?” After cleaning out the crate they were off to their next activity which was going tubing. Not everyone was into this activity. Alexis and Maddy were not so sure about this activity, but eventually, they were convinced to get on. Unfortunately, before they could get on the tubes it starts to rain, however, this does not deter the boys enthusiasm for the activity. Once they got started everyone including Alexis, Cara ,and Marley. Cara says “We were going so fast the water felt like rocks.” Kate is apprehensive about her own rocks. Joel rides with his mom. Kate screams the whole time. She says “I was so thankful for Joel. I screamed at loud decibels and probably damaged his hearing for life.” Once again, despite some apprehension and objections, the kids have a blast.

On day three everyone is going to play archery tag. Kate says “i was excited to play, but I was not excited to pick teams because it is always a disaster.” Cara and Hannah automatically decided to be on the same team and choose who they want to be on their team. No one wants Kate to be on their team. Cara is almost like a sharpshooter out there on the field. The kids are having a blast playing the game. Cara’s team wins the first two rounds. For the third round they broke up the teams and picked new teams from a hat. The final four ended up being Alexis and Joel against Leah and Marley. The winners were Alexis and Joel. They were super excited. After archery

After archery tag the kids split up. A couple went rock climbing while others went to play paintball. Cara was really good at paintball. Kate is trying to encourage Hannah to climb the rock. Meanwhile her sister was giving her a hard time. Kate tells her “We encourage, we don’t discourage.”

After watching the girls rock climb she heads over to the paint ball station and is very excited to try that activity. She decides to shoot at objects and maxes out on paintballs. She says “I’m really glad I came down here because I love to shoot. This activity was a lot of fun.” The kids are pretty tired after the day’s activities so they head home to take care of the puppies and get some rest. On their final day in the

On their final day in the Poconos they are going white water rafting. Kate is very apprehensive because of her last experience on a white water rafting trip. She says “I don’t like being submerged in deep water. I kind of have a feeling of dread.” The kids were also a bit nervous, but once they started everyone relaxed. The tour guide got them to play river limbo. Everyone was having a great time. The girls stood on “Jesus Rock”, Suddenly there was a rapid. Kate says “They did say there was a rapid at the end and I felt like they kept us safe all this time and now we were going to go over Niagara Falls. Fortunately it was nothing like that and everyone had a great time. Kate says “This time it was great because our tour guide was fun.”

When they get home Kate is preparing their last dinner. The kids are outside playing with the dog and when they come inside the noise is overwhelming. Kate calls a time out. She says “My ears just needed a break.” She asks the kids what they wanted to do if they came back again. The answers varied, but most of them wanted to do archery tag again.