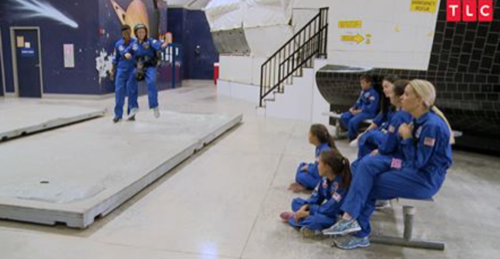 Tonight on TLC Kate Plus 8 returns with an all new Tuesday, December 13, season 5 episode 4 called, “Gosselins in Space” and we have your weekly Kate Plus 8 recap below. On tonight’s episode as per the TLC synopsis, “The Gosselins go to Alabama for Space Camp, where they become astronauts for the day, but family squabbles could cut their mission short.”

On this week’s episode of Kate plus 8 Kate is trying to train the three new dogs to listen. It is not going well at all. Kate says “Sometimes we play with them together and sometimes we play with them separately depending on the day and our ability to separate them.” She wants to put them in obedience school but it will have to wait until after summer vacation because they are getting ready to go to space camp.

Once again chaos reigns as they try to prepare for the trip and chores are being done and packing must be done. Cara and Maddy are super excited about space camp. When they get there the kids are excited when they find out that they will be trained in a similar way to how actual astronauts train. The kids were super excited to get their own space suits and get into their first exercise. which was the spinning chair. Kate was not looking forward to doing this at all. When she got into the chair she was a nervous wreck. The girls were laughing at her as she shrieked and screamed her way through the ride. Kate said “I just wanted to do it to see what it would feel like. It felt completely out of control.”

The next activity the kids get to do is to walk on the moon. Their instructor shows them three different methods for moon walking. She shows them the bunny hop, the side to side and finally the slow motion jog. The kids practice these for a little while and they all seem to really enjoy this. Cara and Maddy especially seem to take to this. Kate says “It wasn’t as easy as it looked and I was determined to do that well.” Cara says “That was fun and then they wanted us to do a specific kind of hop and I was just gonna hop the way I wanted to hop.”

After the moon walk they moved on to the lunar mission. The kids all wanted to be part of this and everyone wanted to be in the shuttle. Madelyn says “I think she has a problem where she doesn’t realize that we are children and she always wants to do the most fun part.” AAden got to be the pilot and Alexis got to be the commander while Kate worked mission control.

Joel was flight director and it made for a bit of a confusing time getting the ship off the ground. Maddy and Cara were sitting at the desk in mission control reading lines from a script. The kids actually got to put on lunar space gear and go out and fix a solar panel. There was some confusion in the dialogue and on which button to push at which times. Kate says “I’m so jealous. I’m supposed to be out there and instead I’m in here running a circus of idiots.” Somewhere in the middle of the mission two of the kids decided to abort the mission and break out into dance. Kate says “Houston we have about 100 problems.” Despite the issues the kids have a great time.

On the second day of space camp the family is going to learn all about flying. Their first activity is to fly in a flight simulator. The instructor is showing Kate how to lock on and shoot at her kids in the simulator. Aaden and Joel were super serious about the whole experience. Cara and Maddy did not do so well at this activity. They were shot down or crashed. There was an award for the last man standing at the end. The final three were Aaden, Kate and Leah. Leah wins the Top Gun award.

The next activity is the dunker simulator. Kate was very nervous about this one. She was not the only one who was this time. Cara and Maddy were also nervous about this activity as well. The instructor gives the kids five scenarios to act our during the simulation. Kate, Cara and Maddy decide to sit this activity out. The other kids have an absolute blast doing the teamwork exercise. The kids got Flying Aces patches for finishing the exercise. Kate says “I know that most, if not all of them, want to come back and do the extended version of Space Camp sometime soon. The kids once again had a really great day.

After two full days of space camp everyone is heading to the beach. The drive to the beach is relatively short. When they get there the kids quickly get the stuff unpacked and put away. Everyone is extremely tired and so getting things situated is a bit difficult. Maddy says “It was horrifying. It was really bad. I just wanted to go to bed.” Kate says “It was one of the longest days ever. Space camp was amazing, but now it is time for us to be on the beach with our feet planted in the sand.”