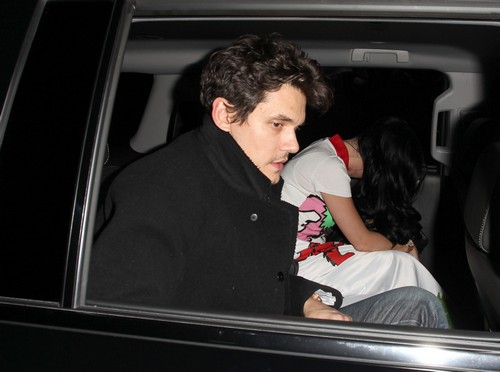 Katy Perry and John Mayer were spotted partying together at The Nice Guy in West Hollywood until the early hours of Thursday, December 31. While Katy and John were enjoying a late night out, Katy took the microphone and serenaded her definitely on-again boyfriend with Natural Woman as a guitar can be heard that is assumed to be Mayer.

Katy and John partied at The Nice Guy together until 4:30 a.m. according to a TMZ report. That’s where Katy seemed to be professing her love for John with her own rendition of Natural Woman. The couple definitely look like they are back on and don’t care who knows it.

Perry and Mayer were seen leaving the WeHo club together just before the sun came up.

Katy Perry did her best to block a good picture. Perry kept her head down and her hair in front of her face to block a good shot. John Mayer was clearly seen in several pictures with a covered-up Katy Perry in the backseat of a car together.

Were they just sharing an Uber or were they headed to the same place? Our bets are on the latter. The on-again, off-again couple seemed to really be enjoying each other as they partied into the early hours of Thursday morning. Is this a sign that Katy and John are back on?

Katy has been touring non-stop over the past year, earning her top spots on several Forbes lists. It seems like Perry has been spending time with John Mayer when she has time but lately she has been rushing from one gig to the next.

Now that Perry’s Prismatic tour has wrapped up, maybe she’ll have a bit more time on her hands to spend with John.

What started out as possibly a plot to burn rival Taylor Swift looks to be turning into a lasting relationship. Is it really possible for John Mayer and Katy Perry to settle down together?

It sure seemed like they were serious when Katy belted out Natural Woman to a hushed crowd at The Nice Guy, presumably as a dedication to Mayer.

It’s looking a lot like singers Katy Perry and John Mayer may be “on again” as they were spotted leaving The Nice Guy nightclub together on December 30, 2015 in West Hollywood, California. Will the pair be ringing in the new year together again as a couple? FameFlynet