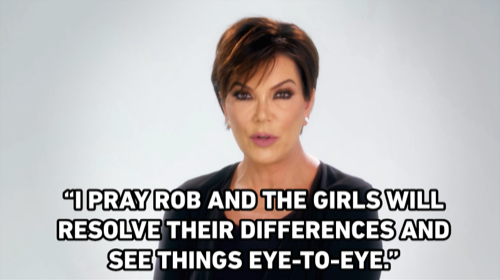 On the last episode, Kris took her family on a surprise vacation to Vail, Colo.; and the Ks reacted to news that Rob had proposed to Blac Chyna. Did you watch last week’s episode? If you missed it, we have a full and detailed Keeping Up With The Kardashian recap right here for you.

On tonight’s episode per the E! synopsis “after the announcement of his engagement, Rob has another piece of news that will change the family forever; Kylie struggles with anxiety from being in the spotlight.”

On this week’s episode of Keeping Up with The Kardashians Kourtney and Malikah are hanging out. Malika asks her about Veil. Khloe tells her “It was fun.” Malika asks if it was weird that Rob wasn’t there. Kourtney says “He was invited and said he was coming,but then decided not to.” Malika tells Khloe “Do you think it is because he couldn’t bring her along?” Khloe says “What would she do on our family vacations?” Malika tells her “When she marries your brother you guys will be family. Maybe you guys can grow into some kind of family unit.” Khloe laughs and tells her “Stranger things have happened. My stepdad turned into a girl.”

On the way back from their extra day in Veil Kourtney seems much more at peace with her relationship with Scott. While on the plan she received a text from Rob asking to meet with her and the rest of his sisters to try and resolve the tension between them.

Kylie goes to visit her mother and she shows her mom the new dog. She is also having a Lip kit restock. Kylie says “I am a little nervous about the lip kit restock because my website was flooded and it crashed. When someone doesn’t like something it affects me more than when they do.” Kris suggests that kylie gives a lip kit to Caitlynn, herself and her sisters. Kris is also worried about the situation with Rob and she tells them “I am thinking of canceling my business trip to Dubai.” Kourtney wants to know why she would do that.Kris tells her “I want to be here in case Rob needs me.” She then says “I have talked to Rob privately and he wants to talk to his sisters about the situation so that they have a better understanding. I would feel bad if I weren’t here if he needed me.” Kourtney tells her “You have always taught us to honor our commitment. You have left me with Rob before. i think I can handle it.”

Kylie is preparing for her lip kit relaunch. The girls and Kris talk over lunch. Kris talks about being booed at an appearance. Kylie says “Hearing my mom talk about being booed makes me nervous to do this.” Kylie tells them “I am feeling really anxious about this.” Kris tells he is “Khloe used to have these issues as well.” Corey asks “What do you do when you are anxious?” Kylie says “I just freeze up.” Kris does an interview and when she is finished she says “I need to focus on business, but I am really worried about Rob.” Suddenly she receives a phone call from Rob telling her that he is going to meet up with his sisters.Rob and Khloe are the first two to meet up for the meeting. They

Rob and Khloe are the first two to meet up for the meeting. They immediately begin arguing. Rob asks her how Veil was and Khloe tells him “It was good. Good memories.” Rob begins making excuses about why he didn’t come on the ski trip telling Khloe “I had no clothes and I wasn’t to go skiing with no clothes.” Khloe tells him ” You can do whatever you choose to do.” The two begin arguing heatedly, but before things can get to out of control Kim and the rest of the sisters stroll in. Once everyone is together Rob apologizes for not informing them in advance. He tells them “I knew I was going to do it. I just didn’t know when.”

Kim tells him “We just want you to be happy and to get out of the house. If she does that for you then great. Rob tells them “There is one more thing.” Kim guesses that China is pregnant and Rob confirms it. At first the sisters are shocked, but eventually, they all congratulate him. Rob says “She didn’t want me to say anything until she was three months along, but after seeing your reaction to the news of the engagement I didn’t want you to find out and she was three months along.” The sisters are in shock, but Kim says “I don’t know what the next step is for Rob, his girlfriend and us. That is up to Rob.”

Kylie, Khloe, and Kim meet up for a workout. After they finish Kylie leaves and Kim and Kourtney are on the phone with their mother. They tell her “We talked to Rob and things are all good. We know that you wanted to be here when we talked to him, but we wanted to tell you it was all good. There would have been nothing you could have done. Rob has all of his sisters and we are there for him.” Kris sounds relieved as she says “That;s good. Thank you for letting me know.” After they hang up Khloe says “I know my mom wanted to be here when we talked to Rob, but there really wasn’t anything she could have done. Mom really needed this vacation and she deserves it.”

Kris and Corey are having a great time in Dubai. KrIs says “Sometimes in life you have to walk away from a situation in order to gain some perspective. I am having another grandchild and I am happy. I am Rob’s mom and I just need to love him.”

Kim, Kylie, and Kourtney were talking and Kim asks Kylie about her anxiety. Kylie says “‘I don’t know. I get nervous about everything. I just know I am not supposed to be famous.” Kylie says “Some people are born for this life and others aren’t and I just know I’m not.” Kim tells her ” You just have to have a thick skin and not care what other people think.” Kylie says “How did you stop caring?” Kim tells her “Kanye didn’t care and being around someone who didn’t care made it easier for me not to care.” Kylie says “I do care and the negative press bothers me.”

The day of Kylie’s lip restock arrives and there are already issues. Kris trying to help Kylie through it. Kylie says “I am really getting nervous. I hope that everything goes well so people have nothing negative to say.” As they are waiting to post the relaunch online the server seems to go down. Kim says “I think they broke it.” They figure out that the issue is with the Shopify site. They call Ryan and he tells them “They are working to clear the site and once that happens things will be fine.” Once the problem is resolved they quickly sell out of the product . Kylie says “I am so happy that there weren’t any problems and that everyone is happy except for the people who couldn’t get it this time.”

Khloe is hanging out with her mom when she is notified via Instagram of a picture of Kylie and China upstairs at her house. Khloe is not happy. She says ” I thought the picture was photoshopped.” Khloe calls Kylie and asks her “Is there something you forgot to tell me?” Kylie says “We’ll talk when you get here.” Kris tells Khloe “I spoke with Rob and China. They genuinely seem happy. I told China that all I wanted was for Rob to be happy and joyful. They genuinely seem happy together.”

Kylie meets up with Khloe and tells her about the meeting with China. Kylie says ” I told Rob that I wanted to meet with China to resolve our issues and we did.” Khloe says “So you guys are friends now?” Kylie says “Yes and you need to sit down with China and talk to her.” Khloe says “I need to have a sit down with Rob because this divide is not going to fix itself.” Kris and Kim are talking. Kim tells her “I think we have all been so caught up in all of this Rob drama.” Kris says “I think the next step is for Khloe, Rob and China need to have a sit-down and work things out.”