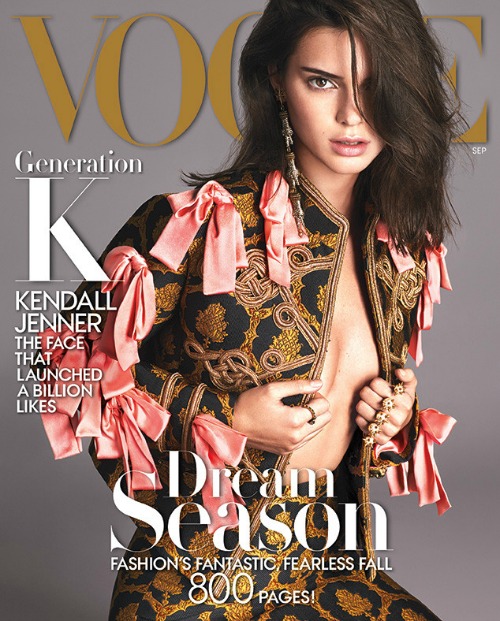 Although she admits struggling with Caitlyn’s transition at first, Kendall says, “it has gotten easier.  I knew it was going to have its rough phase, but it’s all super normal now.  It’s not weird at all.”  Further elaborating on her feelings, she continues, “sometimes I look at a picture of my dad when she was a guy, and it makes me sad—I get a little emotional.  You have to get past it—you’ve got a new person to love.  It’s kind of a blessing in disguise—if that’s not the wrong way to say it.”

The Keeping Up with the Kardashians starlet also discusses how her tomboy childhood was influenced by her dad, stating “we had ATVs and go-carts, and I grew up riding them all the time… It’s super ironic to think about now, but it’s something I can thank my dad for: how much of a tomboy I was.”  She continues, “that’s why I think the whole thing—her transition—was really hard for me because I was like, ‘But you taught me everything, tomboy!’”

Kendall Jenner was born on November 3, 1995 to parents Kris Jenner and Bruce Jenner.  Bruce Jenner, Olympian, celebrated pop-culture figure and public speaker, separated from wife Kris Jenner on March 23, 2015.  On April 24, 2015, Bruce Jenner gave a powerful interview with Diane Sawyer on 20/20 where he famously said “I am a woman.”

He revealed himself as Caitlyn Jenner in the July 2015 bombshell issue of Vanity Fair.  Kendall Jenner was the first of the Kardashian-Jenner clan to show support for Caitlyn Jenner after the Vanity Fair issue hit stands tweeting, “be free now pretty bird.”

Although Caitlyn Jenner’s transition has undoubtedly been hard for her family, it is heartwarming to hear such an outpouring of support and understanding from her young daughter.

Tell us what you think about Kendall Jenner’s interview in the comments below!  Are you excited to see Kendall on the cover of Vogue?  Do you think Kendall and Caitlyn Jenner will do a joint magazine cover in the future?  What is your favorite Kendall fashion look of all time?