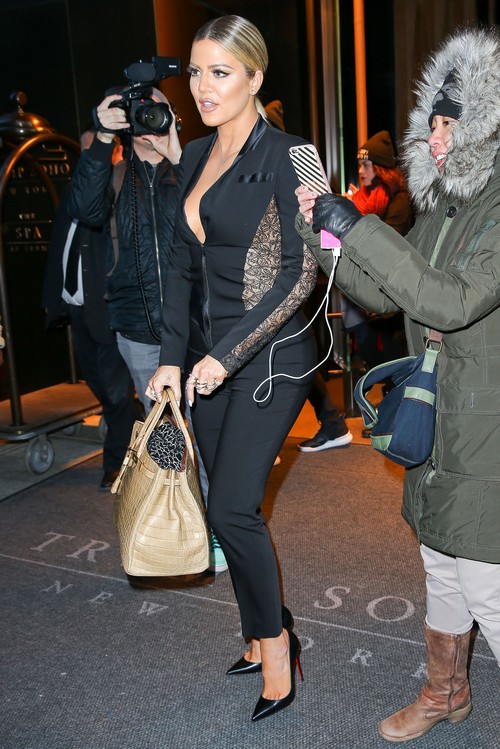 After Howard Stern had time with Khloe to discuss the whole Lamar Odom saga, he moved onto the subject of Caitlyn Jenner and how that affected the whole Jenner – Kardashian family.

“All these tabloids are coming out … we’re like ‘we could ask the source. You’re our dad, we’ll ask you.”

Shockingly, Bruce Jenner lied to the family repeatedly. He told them that all the rumors and tabloids about him weren’t true. So naturally when all the truth came out, it broke their hearts that Bruce Jenner didn’t have the decency to tell his family the truth. Finding out something this big should have come from Bruse Jenner… but it didn’t.

Khloe told Howard Stern how they really found out about Bruse Jenner transitioning into a woman,

“Something happened where we were at a meeting with E! for something and they mentioned that Bruce was having a TV show about transitioning or something. That’s the first we heard of it.”

Yeah. That’s jacked up on a whole new level of jack.

“When things started going,” Khloe remembered, “he would only want to talk to us on camera … and I think it was also for security. Maybe he felt like we couldn’t get as upset or whatever.”

She was pissed and who could blame her? Khloe didn’t hold back anything at this point as she vented to Howard,

“We felt so like ‘what the f**k? We’ve been asking you and why do business people know?’ I never want someone to feel like they have one-up on our family. We are a family. We’ve never turned our backs on each other yet with all the clusterf**ks of s**t that’s happened in our lives, why would we now?”

Khloe continued to vent to Howard with this,

“I don’t give a f**k what you want to do – just stop lying to us about things. Also it’s like, each sister had a different story because he couldn’t keep up. Just lay it on the table, what are we doing? What’s happening? Even then he didn’t tell us … we didn’t know when he was going to start fully dressing as Caitlyn.”

Yeah… it was all done wrong by Bruce Jenner. He should have been honest with the people it was going to affect so drastically. But he chose the selfish way out of it. How sad.

Khloe was in New York City for a bit of a press tour as she made appearances on Good Morning America, The Howard Stern Show and Jimmy Fallon to name a few.

If you saw earlier posts from the day before, you saw that Khloe was stranded in Las Vegas after her place en route to New York City was diverted for an emergency landing.

This was a good trip for Khloe. She needed this trip like a healthy dose of therapy to get rid of the weight on her shoulders. So I saw good for you girl! Glad you got all that off your chest! Cheers to a great 2016 for you without that kind crazy….

How do feel about this whole thing? Do you think that Caitlyn Jenner had the right to screw over his family? Or do you think he should get b***h slapped for being a wussy about the whole thing and letting down those that loved him the most?

Khloe Kardashian is seen leaving the Trump Soho Hotel in New York City, New York on January 13, 2016. Earlier today Khloe told Howard Stern that Caitlyn Jenner lied to the Kardashian family about her transition and only found out about it after the producers of their show told them she was getting her own show. FameFlynet