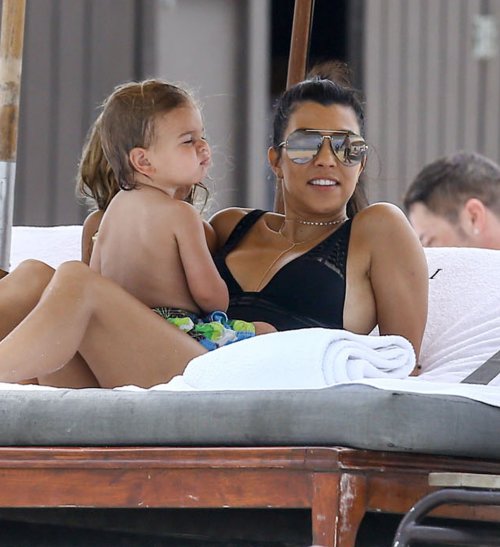 The rumors that Kourtney Kardashian is pregnant with baby #4 by estranged boyfriend Scott Disick are growing more insistent. So is she pregnant and, if so, does this mean that Kourtney and Scott have reconciled?

Photo agency Fame Fly Net captioned a set of beach day pics in Miami – see photo gallery below – with “Pregnant Kourtney Kardashian enjoys a day on the beach with her kids in Miami, Florida on July 2, 2016.”

According to the agency, “Kourtney recently announced that she was pregnant with child number four with Scott Disick.” Kourtney recently posted a pic of herself on Twitter looking fit and trim, but sources report she’s only four weeks along and wouldn’t be showing yet anyway.

Alternately, that could be an older pic that she’s using to thwart pregnancy rumors (see pic below). In that photo, she’s in a bikini while in the beach photos, she’s in a one piece and looks to be a little thicker around the middle plus she was careful to obscure her stomach by carrying daughter Penelope. 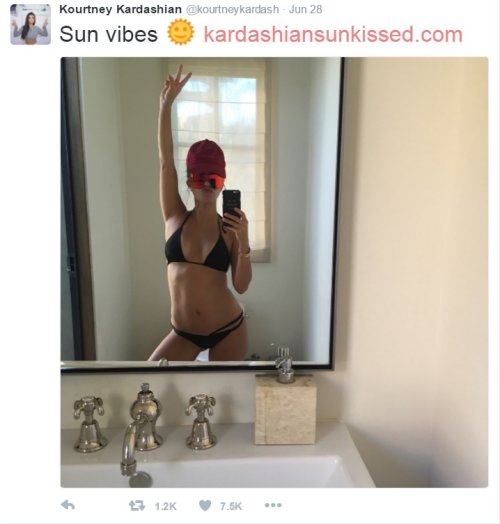 If Kourtney Kardashian is pregnant, this would be her fourth. She and Scott Disick share sons Mason Disick and Reign Disick plus daughter Penelope Disick. That’s assuming the baby is Scott’s. Kourtney has also been seen out cavorting with Justin Bieber, so we’ll see how this plays out.

Scott Disick seems to be working hard at getting back in Kourtney Kardashian’s good graces so long as he can stay sober and on the right path. Disick even talked about his hopes for their future together on an episode of I Am Cait.

Disick also did an interview with an Australian radio show where he said, “I’ll love her til the day I die” and called Kourtney his “best friend.” But consider this. Even if Kourtney Kardashian is pregnant and even if the baby is Scott Disick’s, that doesn’t mean that they’re back together.

Kourtney is the most practical and, in many ways, least sentimental of the Kardashian clan. If she decided she wanted a fourth child and wanted all her kids to have the same father, Kourtney could have gotten pregnant with no intentions of reconciling.

Kourtney seems to be willing to let Scott Disick drift in and out of her life (and in and out of her bed) so even a pregnancy may not mean that they are coupling up again. Is Kourtney treating Scott as a “donor” to get her pregnant with no emotion attached?

Kourtney has made it clear that she wants a large family, but that doesn’t mean that large family has to come with a husband attached to it. What would be far more shocking is if Kourtney announced she was marrying Scott Disick.

A Kourtney-Scott marriage seems highly unlikely, but if he’s willing to continue impregnating her, that might be how their relationship works. After all, he still appears on Keeping Up With the Kardashians and keeps cashing those reality show checks, so maybe he’s not emotional about it either.

What’s more, his primary source of income seems to be from public appearances because of his reality TV stardom from KUWTK. Maybe Scott Disick is in too deep with the Kardashians to ever get out and if producing a kid every so often is the cost of fame and fortune, maybe he doesn’t mind paying it…

What do you think? Share your comments below on Kourtney Kardashian’s rumored pregnancy and whether you think this means she and Scott Disick are back on.

Be sure to come back to CDL often for all the latest celebrity news and gossip!

Kourtney Kardashian was seen taking her family for boat ride while on vacation for the 4th of July Weekend in Miami, Florida on July 3, 2016. Kourtney headed out to sea with her son Mason, daughter Penelope and family friend Jonathan Cheban.

Kourtney Kardashian relaxes by the ocean with Mason and Penelope in Miami, Florida on July 3, 2016. Kourtney showed off her summer body while out.