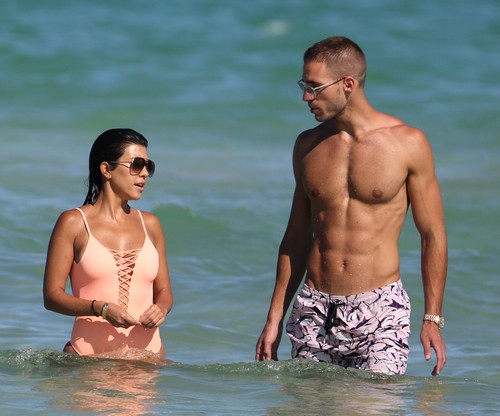 And Kourtney Kardashian surely proved that point by stepping out with a new man while showing off her super sexy curves in a plunging neckline on the beach. What’s more, Kourtney Kardashian and the mystery man were also spotted enjoying lunch before heading back to her hotel together.

And now that Kourtney Kardashian is looking her best in years and attracting the attention of handsome and potential suitors, there’s a good chance that Scott Disick is regretting his past actions and letting the one and only love of his life slip away before his eyes.

Of course, no one knows who Kourtney Kardashian’s new boyfriend is, but it will only be a matter of time before she introduces him to the world. Not only is he tall, sexy and has a great physique, he’s also clearly into Kourtney Kardashian by his body language. Hopefully Kourtney Kardahsian has finally found a man who is not only going to treat her with the respect that she deserves, but also stay faithful to her, especially through the good times and the bad.

Kourtney Kardashian is spotted with an unidentified mystery man on the beach in Miami, Florida on September 17, 2016. The reality star, who was seen earlier today with her estranged husband, Scott Disick, was wearing a sexy one piece swimsuit with a plunging neckline. Rumors are swirling that she is dating someone new. After the beach, she was seen heading out to lunch with the mystery man and then back to her hotel. FameFlynet