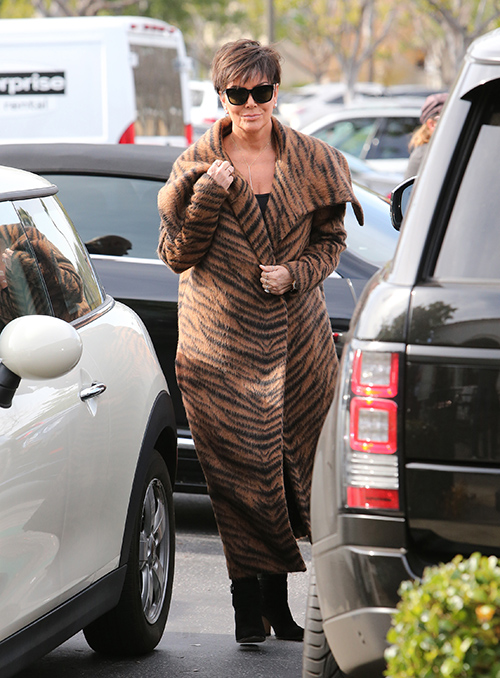 Kim Kardashian should be furious over Kris Jenner’s latest comments. Kris Jenner opened mouth and inserted foot again! Jenner is disgusted by the photos Kim Kardashian shares on social media. Disgusted? There would be no “Keeping Up with the Kardashians” if it were not for Kim’s ample assets.

Kris has no business calling anything Kim Kardashian does embarrassing when Jenner has been the puppeteer behind everything. Would anyone blame Kim if she fired Kris? Without Kris at the helm will the “Keeping Up with the Kardashians” empire come crashing down?

The momager was cornered at the Architects of Change event on January 13 and asked what she thought about the nearly nude photos Kim and the rest of the Kardashian and Jenner gals share. Basically, Kris had this to say – the photos are cringeworthy.

But Kris didn’t stop there, oh no! Kris wants the world to believe she doesn’t even know about Kim Kardashian – or Kourtney, Khloe, Kendall and Kylie’s – photoshoots. Isn’t it a manager’s job to know what their clients are doing? After all, the manager gets a percentage of what the celebrity earns, right?

In the same pseudo interview, Jenner claimed that when she’s not happy with something one of the girls has done she makes sure to tell them. Yeah, Kris divulged she’ll rant and rave, scream and yell and let it be known that mom is NOT happy with this and that.

Interesting, isn’t it? Kris sold Kim’s sex tape to Vivid though Jenner has denied it time and time again. Kris never stepped in when a 17-year-old Kylie Jenner started dating Tyga – who is, what – eight years older than Kylie. If you don’t admit your underage kid is dating a grown man it doesn’t count, right?

You know Kris Jenner was encouraging Kylie Jenner’s relationship with the rapper. Jenner had to know Kyle and Tyga were sleeping together before the fashion model’s 18th birthday. Kylie and Tyga traveled together for crying out loud!

How old was Kylie on the family trip to St. Barts? Do we believe the duo spent time with Kylie on a tropical island in the Caribbean and kept things completely platonic?

Sorry, Kris Jenner, these latest comments only make you look like the biggest hypocrite in Hollywood. And that’s saying something in a town full of phonies. Face it, Kris, Kim Kardashian and all the other kids are you’re bread and butter. If Jenner has nothing nice to say? Say nothing at all.