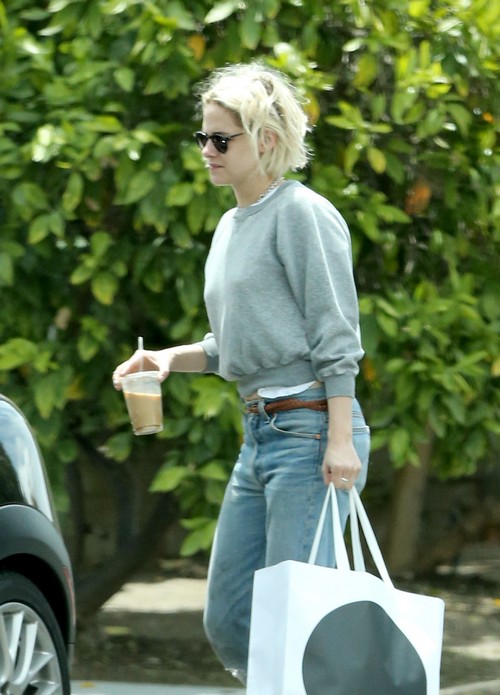 Was Kristen Stewart already cheating with Stella Maxwell at the Met Gala before splitting from girlfriend Stephanie ‘SoKo’ Sokolinski? Has the Trampire struck again? As previously reported, SoKo and Kristen ended things recently, but the timeline on when is a little fuzzy.

The news didn’t hit until May 6. That was four days after insiders reported that the ‘Twilight’ saga star was seen flirting with Victoria’s secret model Stella Maxwell at the Met Gala.

Don’t worry, Kristen appears to have bounced back from the break-up. On May 6 Kristen was photographed was in Los Feliz getting an iced coffee and hugging an unidentified. Kristen was all smiles and didn’t appear to be heartbroken over the split from SoKo.

Cheating on a boyfriend or girlfriend appears to be Kristen’s style. She cheats then moves on to the next lover.

The first time anyone knew of Kristen’s propensity for cheating was when it was exposed that she slept with a very married ‘Snow White and the Huntsman’ director Rupert Sanders while in a relationship with Robert Pattinson. Who picks Rupert over Robert?

Robert Pattinson was devastated and humiliated. Rupert’s wife Liberty Ross divorced him. Kristen walked away from that nightmare with the reputation for being a cheater. Sure, Kristen Stewart issued a pathetic public apology to Robert for the affair Rupert but that seemed to have been motivated, if not demanded by TPTB behind the Twilight franchise.

After sabotaging her relationship with Robert and the Twilight franchise, the actress moved on to personal assistant Alicia Cargile. Yet another relationship Kristen refused to publicly acknowledge.

If you don’t admit you’re dating someone does that make it okay to cheat? In Kristen’s case it appears that way. Kristen’s moral compass is broken beyond repair. It’s as if cheating is second nature to Kristen.

If Stella Maxwell is the new woman in Kristen Stewart’s life she might want to prepare herself. Kristen’s history of cheating on lovers is well-documented. Once a Trampire always a Trampire?

Kristen Stewart, is spotted in Los Feliz, California on May 6, 2016. It has recently been reported that Kristen and her girlfriend, Stephanie “Soko” Sokolinski, split up after rumors of Kristen Stewart and Stella Maxwell getting friendly at the Met Gala after-party. She was seen with a friend and was trying to evade the photographers. FameFlynet