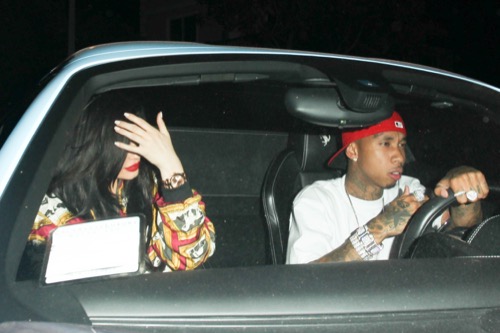 Kylie Jenner just can’t seem to shake her Tyga obsession because she’s back with the guy. But what does that mean for Kylie’s rumored romance with PartyNextDoor? Tyga posted, then deleted, an Instagram pic of Kylie in his bedroom with the caption “They always come back…”

Then the Kylie-Tyga reunion was publicly confirmed when Kylie Jenner took Tyga to a Kanye West event. Kylie drove up to Kanye West’s new music video premiere for ‘Famous’ with Tyga riding shotgun and that was the second event in recent days.

If anything could detract from Kanye West’s video premiere featuring naked doppelgangers of George W Bush, Donald Trump, Taylor Swift, Bill Cosby, Rihanna, Chris Brown, Caitlyn Jenner and other famous and infamous people – it would be Tyga on Kylie’s arm.

Tyga was quick to post a pic on social media before the Kayne West event to put Kylie Jenner on display sitting on rumpled sheets in his bedroom wearing a tight dress while laughing and covering her mouth. It looks like the Tyga-Kylie split lasted just a few weeks.

In addition to showing up alongside Kylie Jenner, Tyga packed on the PDA with his ex. At the video premiere, witnesses say that Kylie was very handsy with Tyga laying her arm across his shoulder and then later her head on his shoulder.

The couple sat with Kris Jenner and her boyfriend Corey Gamble and Kourtney Kardashian sat on Tyga’s other side. Kylie kissed and cuddled with Tyga throughout the evening, whispering in his ear and kissing his cheek.

As Kylie and Tyga left the premiere, they were spotted holding hands as well. What makes Kylie’s bedroom pic posted by Tyga and all this PDA of further interest is that Canadian singer PartyNextDoor’s new video Come and See Me just premiered.

In the music video, Kylie makes out with the singer – and this had many speculating that Kylie had moved on from Tyga with PartyNextDoor. The two have been hanging out since shooting the video and were still together as of two weeks ago according to E! Online.

But now it seems like either PnD and Kylie really weren’t a thing – or their romance flared up and burned out fast. Either way, clearly Tyga has returned to Kylie’s life despite complaining post-split about how difficult it was being with someone who always had the spotlight on them.

What do you think? Can Kylie Jenner and Tyga make it work this time around? Or is it only a matter of time before they’ve split again? Share your comments below and check back with CDL often for all the hottest celebrity news and gossip.

Kylie Jenner & Tyga were spotted together in West Hollywood, California on June 25, 2016. The two covered their faces and tried to hide as they left 1 OAK. Earlier in the day the two were seen at Kanye West’s video premiere. Rumors are swirling that the two are back together by FameFlynet