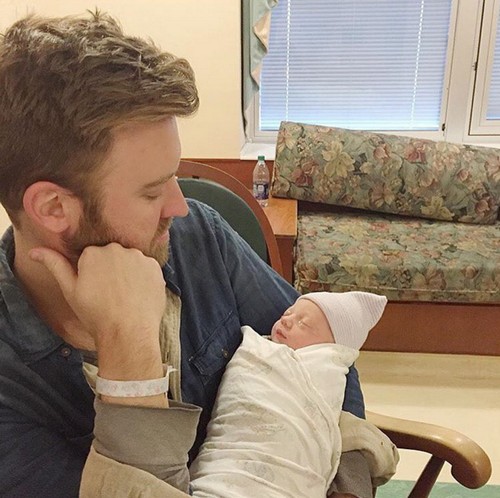 Lady Antebellum singer Charles Kelley and his wife Cassie McConnell are parents after a long fertility struggle! On Friday morning Kelley tweeted “Morning with this new friend” along with a photo of his son, Charles Ward Kelley. Cassie McConnell gave birth at around 9:20 am Thursday in Nashville.

The couple is overflowing with pride as they displayed their 7 pound 9 ounces bundle of joy. It is widely known that they couple had been struggling to conceive for since they got married in 2009. Cassie, who struggled with irregular ovulation, found out she had a 1 in 10 chance of producing an egg. So she was overjoyed when she got pregnant in May.

In 2015 Lady Antebellum took the decision to step out of the limelight for a while and give the fans a chance to miss them somewhat. This would be a chance to get back some of the fire they felt while working on their first record back in 2008. Their self titled debut album broke barriers when opened at number 1 on the Billboard Top Country Album chart, the first such achievement for a band.

Determined to be a hands-on dad, Kelley is working close to home. Speaking proudly of his nieces and nephews, Kelley states he will definitely be doing his share of diaper changing and long nights with baby Ward.

He has already stated he will not be attending the Grammy’s in L.A. although he joined Sam Hunt on stage Tuesday night at the Ryman Auditorium. The Lady Antebellum singer was nominated for best country Duo/Group Performance for title track on his first solo album – The Driver.

When Kelley and his band mates reunite as Lady Antebellum, it is expected that baby Ward will be present as the group is back on the road.

Charles Ward Kelley was actually due several days after the Grammy’s but both parents are just happy he was born healthy.

Is Charles Kelley also ready to move onto a solo career with more guest performances with Sam Hunt?

can’t stop staring at this little nugget. he has @cassiemkelley nose, yay! and he’s so calm unlike his father. glad I didn’t head up to the @thegrammys events this week or I would’ve missed the coolest day of my life ha!