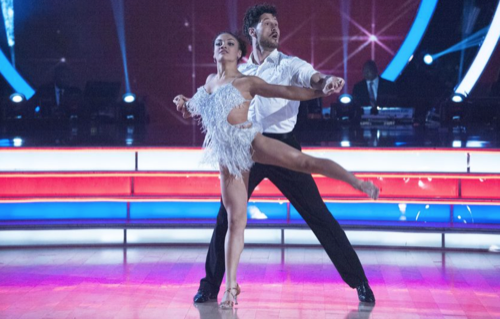 Tonight on ABC the glitz and the glamour returns to the ballroom as Dancing With The Stars returns for the seventh episode of the 23rd season. Laurie Hernandez & her professional dancer Valentin Chmerkovskiy took the stage tonight and danced the Quickstep for their Eras night dance to ““One Fine Day” by The Chiffons (1960s). Did you watch tonight’s DWTS episode? If you missed it we have a full and detailed recap, right here for you.  Did you miss any of tonight’s performance videos? If you did we have them all, right here for you!

On tonight’s episode, each couple will perform either a quickstep, rumba, Charleston, jive, tango, foxtrot, samba or jitterbug. Len Goodman returns as head judge for this special night of dancing, which showcases popular music throughout the eras from the 1920s through the 1990s.

Julianne: What I am going to say is you obviously didn’t miss out because my prom did not look like that. That’s what quickstep is about, it’s about character, you were light on your feet, well done!

Bruno: I bet you never thought you were going to prom with Austin Powers! She was swept off her feet, hardly touched the ground. You are such a zesty and luminous performer, you really light up the room.

Carrie Ann: I thought it was really great. It was light, but that typical Laurie strength that we all hunger for. But, why did you start with a lift and end with a lift. What’s up with that?

Watch the video below and let us know what you think, do you agree with the judge’s comments? Do you think Laurie did enough to avoid elimination tomorrow? Make sure to head over and check out all our DWTS recaps, spoilers, news & more, right here.