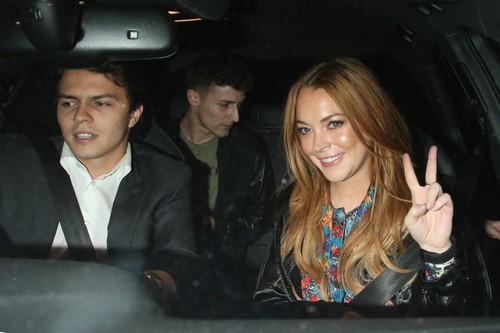 Harry Styles has always been a bit of a Casanova with a taste for older women. But, apparently his boyish charm did not have any affect on Lindsay Lohan when he showed up to her hotel room and tried to have sex with her.

The “Mean Girls” actress claims that she was unimpressed since she didn’t recognize Harry as a huge star – and sent the One Direction hunk packing, she wasn’t interested in a booty call from the boy band singer.

Lohan dished to the British tabloid ‘The Sun’ that one night she was in bed around 2 AM at a hotel, and there was a knock at the door – it was none other than Harry Styles, and she thought he was trying to have sex with her (mind you, this is Lohan’s version).

Lindsay told “The Sun,” ‘He was like, ‘I’m Harry. Gavin and Michael sent me here.’ I was in bed. I was like, ‘I’m going to bed but it was nice to meet you.’ Lindsay claims that she has no idea who Harry Styles was at the time and didn’t recognize the young singer. But, she does note that he looked very handsome in a suit.

In Harry’s defense – (once again according to Lindsay’s version of the tale), Styles was totally set up by his pals that knew where Lindsay was staying in the hotel. They supposedly sent Harry there and told him there would be a raging party at that hotel room. So, you can imagine his disappointment when Lindsay Lohan answered the door – half asleep – and there was no one else at the “party.”

We totally believe that Harry Style and Lindsay Lohan may know some of the same people and their paths crossed in London. That’s not shocking. The part of the story that we are having a hard time buying is that Lindsay Lohan sent Harry Style packing when he showed up at her hotel at 2 AM.

What do you guys think? Did Lindsay Lohan really turn down Harry? Or was he really tricked in to showing up at her hotel room? Let us know what you think in the comments below!