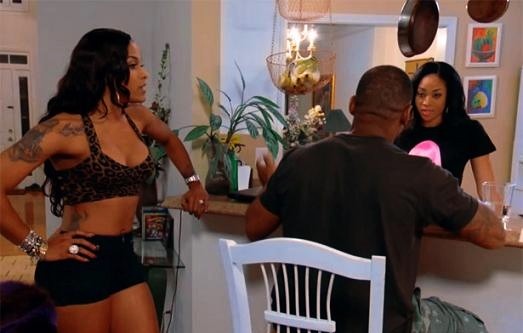 Love & Hip Hop Atlanta stars Stevie J. and his baby-mama Mimi Faust had a WILD time in North Carolina this weekend – and according to one website, the former couple were nearly shot and killed in a hotel parking lot.

North Carolina news channels are reporting that three men have been arrested for shooting up a Hyatt Place Hotel parking lot in Charlotte, North Caroline with several guns, including an AK-47. According to MTO – Stevie J. and Mimi Faust of LHHA were the shooters’ targets.

Here’s what we know, Stevie J. and Mimi Faust were definitely in Charlotte, North Carolina on the night of the shooting – Saturday February 27. Mimi and Steve were hosting a basketball tournament party at Club Empire.

Multiple sources have confirmed that there was some sort of riot late at night at the club, and several local party-goers were apparently not fans of the Love & Hip Hop Atlanta stars. Stevie and Mimi got out of the club safely, thanks to security, and rode off in a van together.

Now, this is where the reports get a little sketchy – there definitely was a shooting at the Hyatt Place hotel on Saturday night, and three men are in custody. According to local NC news reports, over 40 shots were fired in the parking lot.

Media Take Out insists that the shooters are the same punks at the Empire party that were trying to attack Stevie and Mimi – and they followed them back to the hotel and opened fired.

Oddly enough, neither Stevie nor Mimi have mentioned the fight at the club or the crazy shooting in the same city where they were staying that night. So, were they told by the police to keep their mouths shut because it is an open investigation – or were they never involved in a shoot-out?

Honestly, Stevie J. and Mimi Faust LOVE attention, we find it hard to believe that they were able to keep quiet for nearly two days about the event. What do you guys think? Share your thoughts in the comments below!