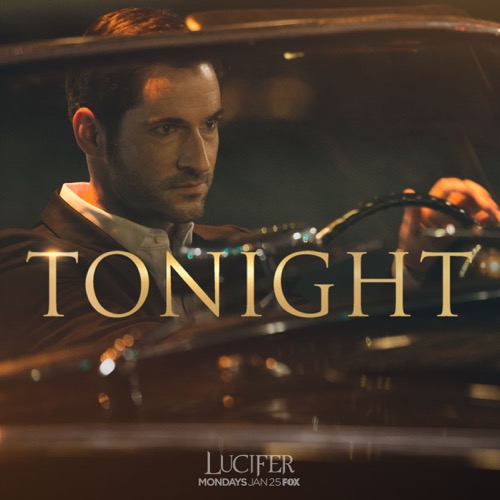 Tonight on FOX Lucifer airs with an all new Monday January 25, season 1 premiere called, “Pilot,” and we have your weekly recap below. On tonight’s episode the devil tires of life in Hell and materializes in the City of Angels, where he aids the LAPD in punishing evildoers. In the opener, he befriends a troubled pop diva and witnesses her murder, which triggers him to seek revenge on her killer.

For those of you who don’t know about the series it is based upon the characters from DC Entertainment’s Vertigo imprint, the series tells the story of LUCIFER MORNINGSTAR (Ellis), the Lord of Hell, who has abandoned his throne and retired to L.A. When he is introduced to LAPD homicide detective CHLOE DECKER (Lauren German, “Chicago Fire”), LUCIFER becomes intrigued by her compassion for humanity, which causes a struggle between his temptation toward the side of Good and his original calling toward Evil.

On tonight’s episode as per the FOX synopsis, “upon leaving hell, Lucifer Morningstar retreats to Los Angeles for a more exciting life. When the murder of a friend connects him with LAPD detective Chloe Decker, Lucifer becomes intrigued with the idea of punishing criminals, sending the devil himself into a struggle between good and evil”

Lucifer Morningstar had apparently gotten fed up of hell and the people in it on tonight’s premiere. So what does fallen angel to shake up his routine – he goes to LA and opens up a nightclub.

Though it didn’t like many people were pleased with how the Devil was taking an overlong vacation in Los Angeles. If anything his former family, of the winged variation, didn’t believe he should be so reckless as to take vacation because they knew such a thing would carry consequences. And unfortunately Lucifer refused to see those consequences until it was too late.

Lucifer’s brother Amenadiel had at first tried to warn him and when that didn’t work he then tried to apply some additional pressure on Lucifer to return to hell. However, nothing worked on Lucifer because he refused to be scared of what Amenadiel could do to him. And he honestly didn’t think their “Father” would let anything happen to him.

But while Lucifer remained out of hell, the demons began to break out of their confinement. Demons as it turns out were actually controlled when they were in hell by the devil himself and without him – they ran rampant. And now sin was flooding the streets.

Though don’t tell Lucifer that because he swears he has no control over what humans do. He said the sin had always been on them rather than him.

And he had been fine with his position as an observer until someone targeted a friend of his. A young woman by the name of Deliah had used to war at his bar but then one day he decided to help her with her career. So he set her up with a producer and her singing eventually took off. But after the albums sales dropped and Delilah’s drug problem kicked into high gear – Delilah had started to worry about her relationship with Lucifer.

She had figured out who he was and she had wanted to know if she sold her soul to the devil for her career. And unfortunately for her, Lucifer had to tell her that she hadn’t sold her soul. Therefore, her life going to crap wasn’t exactly his fault.

But he did say that there was something she could do for him. Lucifer told her that if she got her life together then he would consider his original favor to her to be paid in full. And as it happens Delilah had taken him up on his offer.

She said she would get clean and it had looked like she meant it. Yet not long after she had made that promise to Lucifer, someone gunned her down in the streets. Some low level drug dealer had shot at both her and Lucifer. And then he had miraculously gotten hit by a bus.

So someone was clearly on Lucifer’s side because, after his immortality kicked in and he was able to shake off the bullets, he had just enough time to question the shooter before “Eddie” crossed over. And with the short amount of time they had, Lucifer had only wanted to know why. Why did Eddie kill Delilah? And the other man’s answer was money. He had implied that someone had paid him to carry out the job.

And thus when the police later showed up, Lucifer had thought he could tell Detective Chloe Dancer about what Eddie had told him and that someone would be punished for what they did to Delilah. But she had to inform that law and order didn’t work like that. And that her bosses were already looking to close the case.

Delilah had been a high profile person and the person that had pulled the trigger was dead. So the LAPD kind of wanted to move on and say that karma took care of their perp for them.

Yet Lucifer didn’t want to let Delilah’s murder, and her actual killer, go. Therefore, he began his own investigation into who could have hired Eddie and decided to start with Delilah’s producer. Jimmy Barnes had once been engaged to Delilah but she had left him at the altar and despite that he had still tried to get her back later. Like the time he cornered her at Grammy’s and tried to plead his case.

Only she didn’t want him and Jimmy said that she had moved on to a guy that was even worse than he was. Delilah had apparently left him for the rapper 2Vile who had gone on to hit her. Though after Lucifer put the guy through a window – the full story about that had gotten out. And the rapper had hit Delilah after she had cheated on him with a married man.

Although 2Vile said she had forgiven him and was even going to therapy in order for them to work through some of their issues.

So what Lucifer needed was to figure out who the third guy was but Detective Chloe had caught him with the rapper. And she had wanted to arrest him for assault. Because that is what he did and as a police officer it was her job to arrest a man for a crime.

Though he somehow convinced her not to and not with his usual mind tricks. Lucifer can get people to tell him their deepest secrets but that hadn’t worked on Chloe. And she in fact appeared to be the only human that was immune to him.

And so the only way to get her to side with him by working on Delilah’s murder together was for him to appeal to her better nature.

He said just he wanted to find out what had happened to his friend and that he could help her. So in return she had accepted his help with Delilah’s therapist. And together they got a name – Grey Cooper. An A-list movie star who was married to an A-list actress. Yet oddly it wasn’t Grey or the wife that had known about Delilah that was their killers.

Both Grey and Amanda Cooper were seemingly too wrapped up in sleeping with other people to actually get upset over Delilah.

And so the only person that honestly profited from Delilah’s death had been her producer. Jimmy you see still had the rights to Delilah’s music and her album was selling faster than ever now that she was dead. So Chloe and Lucifer decided to pay Jimmy a visit at his studio.

Though Jimmy had responded to that by pulling a gun on them. He managed to shoot Chloe but the bullets didn’t work on the Devil. And in the end, Lucifer was able to make the other man pay for what he did to Delilah.

But there was no hiding what he was from Chloe. Chloe had later survived her ordeal and she recalled the moment Lucifer was able to walk away after being shot. So while she’s struggling to comprehend the fact he really is who he says he is – Lucifer has decided to begin therapy.

He had already agreed to sleep with Delilah’s therapist in exchange for the name of Delilah’s married lover however now he thinks the doctor might actually help him with his “issues”. You know the reason he suddenly decided to help the police and play good guy.