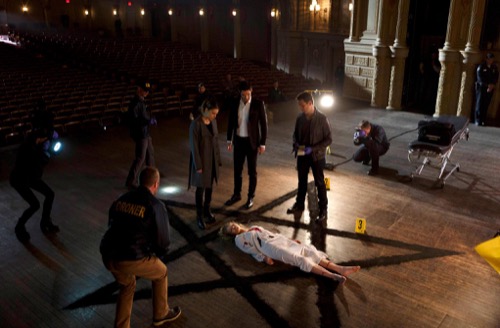 Tonight on FOX Lucifer airs with an all new Monday, April 18, season 1 episode 12 called, “#TeamLucifer,” and we have your weekly recap below. On tonight’s episode a dead woman’s body is found manipulated into the shape of a pentagon on the Hollywood Walk of Fame.

On the last episode, when philanthropist Tim Dunlear was found dead, Lucifer explored his good side by becoming a benefactor for Tim’s glitzy Los Angeles charity. Did you watch the last episode? If you missed it, we have a full and detailed recap right here for you.

On tonight’s episode as per the FOX synopsis, “a dead woman’s body is found manipulated into the shape of a pentagon on the Hollywood Walk of Fame and the investigation points Lucifer and team to a cult of Satanists.”

Don’t forget to join us for our live recap tonight at 9:00 pm when Lucifer airs on Fox.

Tonight’s episode of Lucifer kicks off in a candle-lit room, men in black cloacks are standing over a woman and chanting that she is her sacrifice. One of the men says Lucifer’s name and then stabs the woman in the chest with a wooden stake and kills her. One of the men carries the girl in to the bedroom and starts kissing in her – she wakes up, the blood is fake. She laughs about how “cool” the ceremony was. The guys says that he wants to make it “real” and then proceeds to stab her with a dagger and kills her for real.

Meanwhile, Lucifer is in denial – he doesn’t want to believe that Chloe is what is making him weak and human. He has Mazikeen throwing daggers at him, but none of them are hurting him. Lucifer is convinced that his brother Amenadiel is the one that is weaponizing Chloe.

Chloe barges in – she demands to know why Lucifer has been avoiding her for three weeks. Chloe says she needs his help on a case, only he will be able to help her solve it. Chloe takes Lucifer to a murder scene. She says that the victim’s name is Rose Davis and she was a 19 year old college student. Chloe leads him to an empty theater where the blond girl that was sacrificed (once for fake and once for real) is lying in the middle of the stage. Chloe rolls Rose’s body over, someone carved “Hail Lucifer” in the victim’s back.

A crazy man barges in to the theater – he starts screaming that Lucifer is “evil and the devil.” He shouts that he is going to “rise again.” Malcolm arrives at the crime scene, he pretends he doesn’t know Lucifer and introduces himself (as if he didn’t already try to kill him). Malcolm wants to bury the hatchet – Lucifer tells him to get lost. Meanwhile, Chloe can tell that Lucifer is acting strange – he won’t even ride in the car with her.

Lucifer and Chloe head to Rose Davis’s dad’s house (in separate cars of couse). Rose’s dad is clueless as to what his daughter has been up to. In Rose’s house they find a book shelf that doubles as a secret door and leads them up to a hidden room in the attic. Rose’s dad is totally confused – apparently he didn’t know that his house had a secret room. They find devil worshipping books in the room, and a bowl of bloody chicken feet. They find evidence that Rose had a secret boyfriend – of course her dad has no idea who that is either.

Rose had strange piercings – they track down the tattoo shop where Rose got them done. The shop owner confirms he gave Rose the piercings, but he doesn’t know what the letters meant that she had pierced on herself. The shop owner says that Rose’s boyfriend came with her and his name was Corazon.
Chloe finds out that Rose was a member of a cult of devil worshippers called “Children Of The Goat.” She hacks in to their website and finds an address – Chloe and Lucifer head to the mansion. A man in a cloak answers the door and won’t let them in. Lucifer sends Chloe to the car and then he turns his eyes red – the man at the door believes that he is the devil and lets him in.

Inside the mansion, Chloe and Lucifer find the cult members – they are having a funeral/creepy memorial for Rose. Lucifer interrupts, and informs them that he is the real devil. Chloe questions the cult leader – he says that he doesn’t know Corazon’s real name or address. All he has is the PayPal username that Corazon paid his membership fees with. Chloe gets a warrant and contacts PayPal and gets Rose’s boyfriend’s real name – its Mike Carry.

Lucifer goes to Chloe’s house with her so she can take a shower. While Chloe is upstairs, Lucifer wakes up her daughter Trixie and asks if her mom has any scars on her back. Trixie says she does have one on her butt – from when she got bit by her mom’s dog. Chloe comes downstairs, and sends Trixie back to bed. Lucifer makes her take her shirt off so he can make sure that she isn’t an angel sent from heaven to destroy him. Shockingly – Chloe doesn’t have wings, it looks like she is really human.

Chloe gets a phone call from Malcolm, they found Mike Carry’s car abandoned outside of an empty warehouse. Chloe and Lucifer rush to the address, they head inside the warehouse to investigate. They find Mike Carry hanging from the ceiling suspended with his arms stretched out, covered in blood. They find red paint all over the warehouse. Every box has a different letter painted on it, the letters all spell out “Morningstar.”

Dan tells Chloe that this is a conflict of interest and they need to get Lucifer off the case ASAP. Lucifer starts shouting at Chloe that he has nothing to do with him – he would never let anyone hurt innocent kids. Chloe sends Lucifer home and gives him a speech about protecting him.

Lucifer is furious, he heads to his therapist for a session. He explains that Chloe makes him vulnerable, the therapist thinks that he should open up to Chloe more. Lucifer is scared that Chloe might be the one that is trying to kill him, but the only problem is that he can’t make himself stay away form her.

Mazikee is lying in bed with Lucifer’s brother Amenadiel. Before he fell asleep he confessed to her that he was a failure and he was supposed to have brought his brother back to hell by now. After Amenadiel falls asleep, Maikeen takes out a dagger to kill him. He wakes up and stops her and then vanishes.

Lucifer tries to go to his club, but there are a group of people outside protesting. The same crazy man from the theater corners Lucifer and starts shouting that he is the devil again. Lucifer grabs the man by the throat, but Malcolm appears out of nowhere and diffuses the situation. Meanwhile, back at the warehouse Chloe finds a monogrammed cufflink with the letter “M” on it lying on the floor – Dan is convinced that Lucifer Morningstar is the killer.

Back at the police station, Chloe and Dan see Lucifer on the news for attacking the man outside of his club – apparently he is a preacher named Reverend Williams. Chloe pauses the video – the preacher is only wearing one cufflink. They realize that the cufflink that they found in the warehouse was a “W” for Williams, and not an “M” for Morningstar. They rush out to find the crazy priest, who is now their number one suspect.

Malcolm weasels his way upstairs in to Lucifer’s house. He starts drinking and rambling to Lucifer that he is the only one that he can talk to about hell. Lucifer makes a shocking discovery, Malcolm has red paint on his hand. He starts giggling and confesses that he killed the kids to impress Lucifer’s dad. Malcolm tells Lucifer not to worry – he explains that he framed Reverend Williams, so no one will know that it was him.

Lucifer starts screaming at Malcolm that he isn’t condone senseless murders – Malcolm pulls his gun out, but Lucifer snatches it out of hand. While Lucifer is preparing to attack Malcolm, his brother Amenadiel appears out of nowhere. Malcolm slips out the door, Lucifer turns on his brother and sneers that he brought a murderer back to life and the innocent people’s blood is on his hands. Lucifer and Amenadiel start fighting, and breaking through walls. Amenadiel is furious that Lucifer sent Mazikeen after him – apparently he caught real feelings for her.

Amenadiel and Lucifer continue beating the hell out of each other and destroying the bar. Mazikeen barges in and shouts at them that enough is enough. She gives them each the daggers that they need to kill each other and storms out.

Chloe and Dan are still searching the area for Reverend Williams – they still think that he is the killer. Chloe stops by the bar, Lucifer is drinking alone and his brother left, apparently they decided not to kill each other tonight. Chloe sees Lucifer has a bloody nose, he gets emotional and says that all he ever want was to be his own man. Even the people that he trusts are being used to hurt him.

Chloe walks around the bar and finds the Reverend laying on the floor with a bullet wound in his head. She pulls her gun on Lucifer an tells him that he is being arrested for murder.