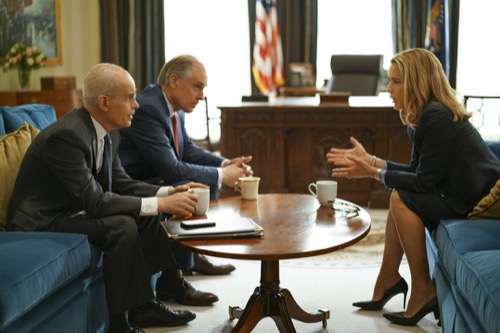 Tonight on CBS Madam Secretary airs with an all new Sunday, November 27, 2016, season 3 episode 8 called, “Breakout Capacity” and we have your Madam Secretary recap below. On tonight’s Madam Secretary episode, as per the CBS synopsis, “President Dalton (Keith Carradine) waits for election results; at the same time, Elizabeth (Tea Leoni) discovers information that leads her to believe Iran may be in violation of their peace deal with the U.S. Meanwhile, there’s romance in the air among some of McCord’s staffers.”

Tonight’s episode of Madam Secretary kicks off on election day – Dalton and Elizabeth are running as independents against Sam Evans and Fred Reynolds.  Jackson is banking on a tie in the elector college, so that the House of Representatives will be the deciding factor.

The McCord House is walking on eggshells on election day.  Allison is afraid that if her mom loses, they are going to have to move.  Jason heads downstairs with a “Vote For Fred Reynolds” t-shirt on.  His sisters give him a hard time over the shirt.  Elizabeth’s phone rings and she and Henry rush out the door, Russell is waiting for them.

The White House has turned in to a campaign headquarters – Russell gives the staff a moving speech about winning over the state of Ohio.  If they get Ohio’s electoral votes, then that is the only way they will make it to House of Representatives.

Elizabeth and Henry head to a local voting poll – the press waits for them outside and snaps photos of them with their “I Voted” stickers.  Once they are back in the car, Elizabeth confesses to her husband that she is scared Sam Evans will win the election, and he will pick apart all of the foreign policies that they have put in place.

At the office, Daisy and Nadine are in the elevator, headed to work.  Daisy explains that her boyfriend Oliver moved to California for work.  She didn’t want to move with him, so they broke up.  Nadine invites Daisy out with her after work to watch the returns.

Walter Nowack is waiting for Elizabeth in her office – he warns her that there is trouble brewing.  Russian nuclear physicists have all gathered together in one town.  It looks like Russia has violated their nuclear deal and are expanding their nuclear program.  Elizabeth tells Jay to look in to it, and to keep it between the three of them until they know for sure what is happening.

The polls will be closing soon – Jay finally gets a list of everyone on the plane with the Russians and sends it to Elizabeth.  She freaks out because she recognizes one of the names, Nazari.  He’s an Iranian arms dealer and works for the bank that the Iranian government deals through. She rushes through the office to find Jay and Walter – they have serious problems.

Meanwhile, Nadine and the rest of the team head to the bar to watch the voting returns come in.  Daisy is being unusually friendly to Matt, he’s thrilled when he learns that she is single again.

Elizabeth rushes to meet with Dalton and Russell to brief them on what she learned.  She warns them that there is a ship en route to Iran, and she is certain that it is full of nuclear warfare that they bought from Russia. Dalton tells Liz to make the call, they need to stop the ship and search it.

A few hours later, Elizabeth, Dalton, and Russell are watching live feeds of the Navy stopping the Russia and Iran ships.  Russia puts up a fight, and the US soldiers kill two of their men.  Over all, it was a success though – they found nuclear warfare on the ship, Elizabeth’s hunch was right.

Russell freaks out though.  He built the entire campaign on Dalton’s foreign policies and detants with Russia and Iran, this is going to change everything and cost the election.

At the bar, everyone gathers around the TV screen, it’s time for Ohio’s results to come in.  Shockingly, Dalton and his team pulled it off, he won over Ohio.  That means that the election if going to the House of Representatives.  Everyone begins celebrating.

Liz misses the party though – she’s still at her office dealing with the Russia and Iran deal.  She meets with Alexei, Russia’s United Nations representative.  He refuses to cooperate, and insists that it is all a conspiracy and America planted the warfare on the ships.  Alexei vows that the US will pay for what they did and storms out.

The next day, the media is all over the Russians and Iranian deal, and Fred Reynolds is campaigning hard against Dalton because of it.  Henry turns off the news, he warns Elizabeth that their son is going to a Fred Reynolds rally.

Nadine and Daisy partied a little too hard last night.  Elizabeth calls Nadine to have her get Walter Nowack in to the office.  Little does she know that Nadine is still in bed… with Mike B. Meanwhile, Daisy gets dropped off at the office by her one night stand.  Inside Matt is hung over and drinking Pedialyte for breakfast.

Walter and Jay arrive to brief Elizabeth on what they found.  Apparently, some major Russian political players have “gone missing” after the ship was raided.  It looks like Russia never set up the deal with the Iranians, it was a few of their guys that went rogue.  So, Alexei wasn’t completely wrong, some one else was responsible for the nuclear deal, but they were still Russian.

In the other room, Russell is panicking, he want Liz to fix this nuclear mess ASAP, they are losing their House of Representatives votes left and right.  Russell thinks that it might be time to join forces with Fred Reynolds – if they can get his endorsement, they could still beat Evans.

Jason comes home from the rally and his dad is not happy.  He posted a video on social media live from the rally, preaching about how amazing Fred Reynolds is.  Henry orders him to take the video down, until he can back up what he is saying and understands the campaign and Fred Reynolds’ foreign policies.

Russell and Dalton meet up with Fred Reynolds in secret, he scoffs at the idea of throwing in the towel and endorsing them.  He thinks that he still has a chance to win after Dalton botched the Iranian and Russian nuclear deal.

Elizabeth meets with Alexei in private.  She tells him that she knows that some of the Russians went rogue.  She offers to help Russia clean up the mess, pay off the families of the soldiers who were killed, and go public and say that it was a joint sting operation and Russia helped the US.

After her meeting, Elizabeth and Mike B head to a meeting with some House of Representative voters.  They want Elizabeth to promise that there won’t be another war in the Middle East.  They agree to switch their vote to Dalton if she cleans up the Iran mess before they vote on January 6.

That night, Elizabeth and Henry lie in bed and discuss Jason’s video.  He took it down, but not before it got thousands of views.  Elizabeth is still waiting for Alexei to call her back and let her know if Russia is going to work with the US, and ensure peace in Iran.

At the office the next day, Alexei arrives and agrees to make a deal with the US.  He and Elizabeth give a joint speech to the press explaining that they are joining forces against Iran and are forcing them to hand over any nuclear warfare they have been working on.

Jason skips school and Henry takes him on a trip to the slums of DC.  He gives him a speech about being “part of something bigger.”  He knows that Jason will be powerful some day, because he is so gifted and intelligent, but Henry wants Jason to wait until he is older and understands what he is supporting before he speaks out.

Elizabeth and Dalton gather to watch live feeds of the UN inspectors in Iran – they are going to inspect their warehouse to see if they have any nuclear bombs.  But, the inspection doesn’t go well.  Iran soldiers refuse to let them in and smash their cameras.  Dalton loses contact with the inspectors.  He tells Liz to call an emergency Security Council meeting ASAP.