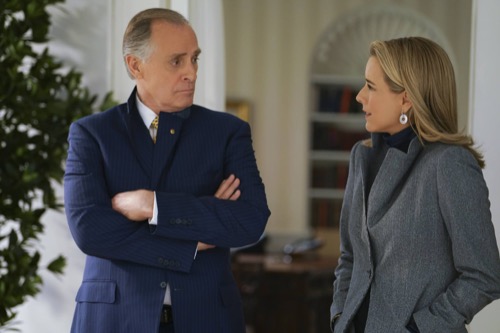 Tonight on CBS Madam Secretary airs with an all new Sunday, December 11, 2016, season 3 episode 9 called, “Snap Back” and we have your Madam Secretary recap below. On tonight’s Madam Secretary episode, as per the CBS synopsis, “Elizabeth (Tea Leoni) tries to stop Israel from taking military action against Iran for its suspected nuclear activity; Russell (Željko Ivanek) wants Henry (Henry McCord) to ask an old Air Force buddy-turned-congressman to support President Dalton (Keith Carradine) in the House’s election vote.”

Tonight’s episode of Madam Secretary kicks off with Nadine, Matt, and Jay bickering in the office over sanctioning Iran. They can’t sanction Iran over building nuclear bombs if they don’t have China’s support. UK and France are already on board, but China is dragging their feet after the Red Sea altercation.

At the McCord House, Elizabeth’s Family is having breakfast. Stevie is dressed to the nines, she explains that she has a meeting with Russell Jackson, she needs a recommendation letter from him if she is going to get in to Harvard Law.

Sam Evans is campaigning hard against President Dalton, the house is voting in less than a month. Sam has been conducting interviews all day long slamming Dalton’s foreign administration policies.

Stevie heads to Russell’s office, and he blows her off. He says he has to reschedule…again. Russell rushes off to Henry’s classroom and interrupts him. Russell is busy trying to scrape of votes for Dalton in the House of Senate, and it turns out that Henry was in the Marines with a Senator.

And, things seem to be going from bad to worse. Not only is France not supporting the sanctions. But, Israel is preparing to go to war against Iran. They are certain that the nuclear bombs that Iran is building are for them, and they are preparing to make the first move and go to war.

Elizabeth works with Jay and Walter to get some intel on the Iranian nuclear department. They learn that its not the leader of Iran that is ordering the nuclear ramp-up, it’s a man named Abedin, a part of the leader’s cabinet. Elizabeth realizes that she may be able to salvage relations with Iran if she meets with their country’s leader behind Abedin’s back.

Elizabeth meets with a leader from Iran, she realizes that the reason they are amping up their nuclear department is because they are afraid that Sam Evans will be elected president next month. And, if that happens, Sam has already vowed to the press that he is calling off all agreements with Iran and they are afraid of what will come if Dalton loses.

Iran wants something from the US in writing that states if Sam Evans becomes President, then he won’t come after them. Elizabeth sets off to track down Sam Evans and try to convince him to stop coming after Iran in the press and in interviews. But, Evans doesn’t seem interested in doing or saying anything that might help Dalton’s campaign. Little does Evans know, their entire conversation was recorded and he basically stated that he is going to say whatever he wants to win the election, even if it could seriously harm the US in the long run.

The next morning, Henry is hung over after drinking with his old Senator friend all night. It looks like he was successful though, in the morning Russell calls the McCord house thrilled because he got another Senator on board. Since Henry helped him out, Russell agrees to finally meet with Stevie. Russell gives Stevie some interesting advice, and tells her that if she wants to be a do-gooder, then she needs to be prepared to do bad.

Iran agrees to stop the nuclear war deal that Elizabeth has been working on. Then, everything goes awry when a terrorist group from Israel shoots down Iran’s plane with their nuclear scientists on it. Iran is on high alert, and will most likely be striking back against Israel.

Dalton is upset when he hears the news. Elizabeth follows him outside to try and comfort him, Dalton explains that the Iran deal is going to define his administration. And, not the way that he had hoped it would.

The next day, Stevie stops by Russell’s office to pick up her letter of recommendation. He’s rambling a mile a minute, and not making a whole lot of sense. Suddenly, Russell passes out and drops to the floor. Stevie screams for help and rushes to Russell’s side.