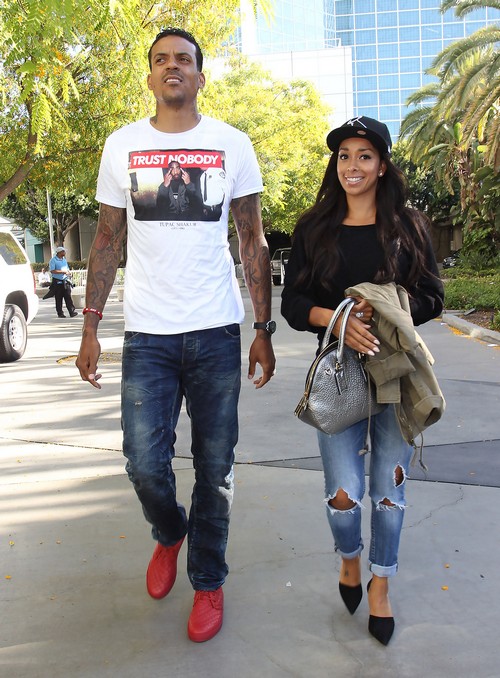 Matt Barnes jumped on Instagram to ring in the new year and captioned a photo with an open letter blasting those he blames for ruining 2015. Matt took aim at Derek Fisher and Gloria Govan, whom the basketball star feels betrayed him.

Barnes also address being “lied on” by a pop star and could only be speaking about some Rihanna drama that went down over the summer.

Barnes lamented that 2015 was the worst year of his life in a long caption on Instagram. Things certainly don’t sound good for the Memphis Grizzlies star whose list of complaints about the past year plays out like a sad country song. “Lost the women I loved,the mother of my kids, my Dogg.. I had to walk away from the only thing I’ve wanted, MY OWN FAMILY!” Barnes lamented in his end of the year wrap up.

Matt Barnes is definitely salty about his pending divorce with Gloria Govan. Barnes just came off a two-game suspension for reportedly attacking Derek Fisher back in October when he found out that Fisher was hooking up with Barnes’ ex-wife Govan.

Barnes was busted after driving to Govan’s house in response to a message from his 6-year old son that said, “Mommy’s friend Derek is here.” Barnes confronted Derek Fisher about hooking up with his ex-wife and apparently things got physical.

That’s what Barnes is talking about when he wrote about “Being stuck in the “triangle offense” w my ex & snitch.” Gloria Govan is obviously the ex and he’s calling Fisher the snitch after the New York Knicks head coach went to both NBA officials and the police, complaining about the altercation with Barnes after he was caught with Govan.

Barnes went into detail about his friend’s betrayal by writing, “I mean former teammate & friend.. Who went behind my back, messed w my ex, got caught, got dealt w for being a snake, then ran & told the Police & NBA.” Matt Barnes played with Fisher for the Los Angeles Lakers from 2010 to 2012.

Matt also addressed some drama he had over the summer with Rihanna. Barnes wrote that he was “Lied on by a pop star” and was clearly addressing RiRi, whom the basketball star teased that he might be hooking up with to some TMZ cameras back in August.

Rihanna responded to Matt’s admission and blasted the basketball star. She claimed Barnes was a liar and that she wasn’t into him at all.

Matt Barnes says that Rihanna wasn’t telling the truth and he can even prove it. Matt continued in his rant about the lying pop star, saying she is “lucky I stuck to the script & didn’t expose her lien [sic] a**. Funny thing about texts & pics is they DONT LIE!” Oh come on Matt, if you have pictures and texts to prove the Rihanna hookup claims, please put those on Instagram too!