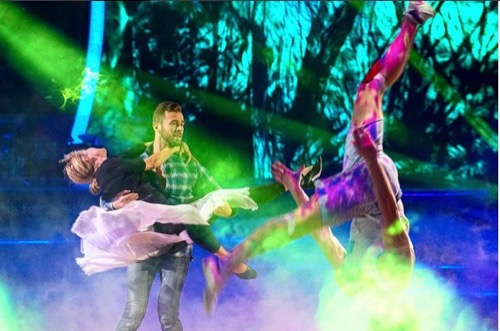 Tonight on ABC the glitz and the glamour returns to the ballroom as Dancing With The Stars returns for the fourth episode of the 23rd season. Actress & Author Maureen McCormick & her professional dancer Artem Chigvintsev took the stage tonight and danced the Argentine Tango for their Cirque du Soleil night dance. Did you watch tonight’s DWTS episode? If you missed it we have a full and detailed recap, right here for you.  Did you miss any of tonight’s performance videos? If you did we have them all, right here for you!

Terra is very excited about dancing and tweeted a message to her twitter fans to let them know how she is doing, “Who else is excited for #CirqueNight?! I can hardly wait, be sure to cast your votes for #teammaureen! <3”

Judges comments on Maureen McCormick’s DWTS Season 23 Week 4 Argentine Tango: Julianne Hough: I really have no more notes because these two made those notes clear with the footwork. What I am going to say was that package was probably hard for you to listen to. Embrace those struggles and lean on your partner and trust him because he is turning you into a great dancer.

Bruno Tonioli: Oh Maureen, you turned into a 1920’s movie queen! Your intents and purpose was so on, yes Gloria Desmond you are back. Your lines were so good! The figures were unbelievable. I’m telling you, you were on it tonight. You were on it.

Carrie Ann Inaba: I was actually a bit worried about you because you are a bit demure. The drums and the red bird were very intense, yet you maintained the focus of all of us because you had such an incredible connection to Artem. I felt like you were living in another world and that is what is great about you. Bruno is right, you could have had a little more intensity in your footwork, but everything about that was dreamy, well done.

Watch the video below and let us know what you think, do you agree with the judge’s comments? Do you think Maureen did enough to avoid elimination tomorrow? Make sure to head over and check out all our DWTS recaps, spoilers, news & more, right here.

The honeymoon is over for Maureen and Artem

Maureen and Artem starting off

It’s getting a little emotional for Maureen and Artem