Miley Cyrus and Liam Hemsworth Australian Holiday: Couple Back Together – Engagement On Again? 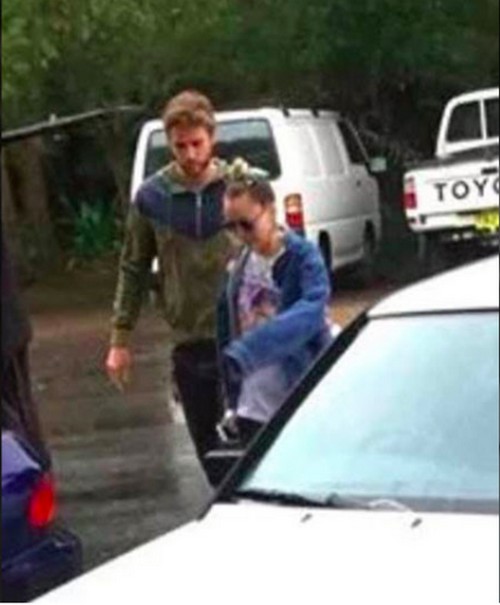 Miley Cyrus is in Australia with Liam Hemsworth as a hot couple for holidays. It does appear the couple is back together and their engagement may be back on! The Byron Bay Music Festival was the place where Miley was spotted with Liam and the “Hunger Games” star’s family.

Cyrus, Hemsworth, his brothers’ Chris and Luke and sisters-in-law Elsa and Samantha slipped into the VIP section at the festival on Sunday, January 3.

Even though the off-again-on-again couple had security surrounding them, Miley and Liam were caught together kissing and snuggling. Someone managed to get a photo despite the entourage in place so Miley and Liam could enjoy some privacy at the music festival. Sydney’s Daily Telegraph published the fuzzy snapshot of Miley wearing a cowboy hat.

Adding to the speculation is a post in on Twitter from Ashleigh, “#BREAKING I spy with my lil eye @MileyCyrus and @LiamHemsworth backstage at falls festival Byron bay hmmmmm #backon #gossip.”

As previously reported Miley never gave Liam back the 3.5-carat Neil Lane diamond engagement ring with which Hemsworth proposed in 2012. Is it possible that sometime during the holiday season Liam got down on bended knee – again – and asked Miley to be his wife?

It has been said that after Miley heard about Liam’s interview and the old feelings came flooding back. Then Cyrus reached out to Liam – and the couple supposedly agreed to meet the next time both were in Los Angeles so they could catch up.

It seems as if Miley Cyrus and Liam Hemsworth had that LA meeting at some point. Are Miley and Liam back together? Will we see Cyrus flashing that 3.5-carat engagement diamond ring soon?