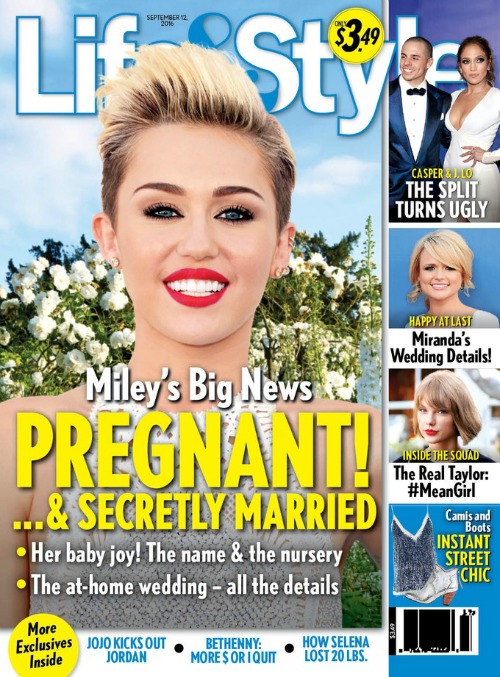 According to the latest cover of Life & Style, Miley Cyrus is pregnant and secretly married! The pop star has been dating Liam Hemsworth since the two met on the set of The Last Song back in 2009.

Miley Cyrus and Liam Hemsworth have been openly planning a wedding for some time but, according to a magazine insider: “Miley’s been telling friends she’s pregnant and as soon as Liam heard the news, he insisted they make it legal. They secretly got married…Miley and her man exchanged vows in front of a small group of family and friends at their Malibu home.”

Gossip Cop however, is reporting that according to a rep for Miley Cyrus, the singer and Liam Hemsworth are not married and not expecting a child. Who to believe?

The reports of the breakup turning ugly are in contrast to the couple’s claims that they intended to remain friends.

Miranda Lambert is planning a wedding to boyfriend Anderson East. The couple have been dating since December 2015. The singer purchased a 400 acre Tennessee retreat earlier this year and rumors abound that she may be planning a wedding close to home. The singer also reportedly retained her Nashville home after her split with ex Blake Shelton, so no worries about running into him or fiancé Gwen Stefani as she prepares a Southern down-home celebration!

Taylor Swift has been outed as a bona fide mean girl, according to the magazine cover. The magazine claims to have reports from inside the tight-knit Taylor Swift squad that prove she isn’t as sweet as she pretends to be. Her closest friends include Selena Gomez, Cara Delevigne and Karlie Kloss and someone has spilled the dirt on the pop star! After another round of Kimye drama, it looks like Taylor Swift’s reputation may be tarnished for good.

What do you think of the latest headlines? Sound off in the comments below!