BY Kristine Francis on May 31, 2016 | Comments: one comment
Related : Mistresses, Recap, Television, TV 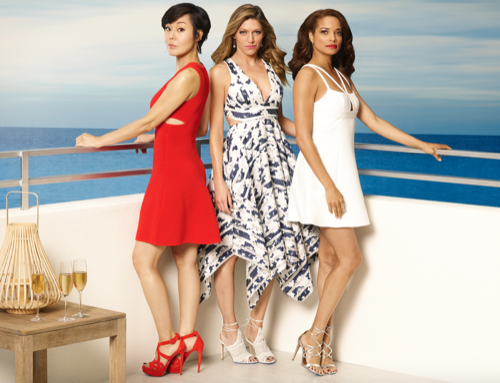 Tonight on ABC their new drama MISTRESSES continues with an all new Monday, May 30, season 4 premiere called, “The New Girls,” and we’ve got your recap down below! On tonight’s show in the Season 4 opener, Joss (Jes Macallan) testifies at Wilson’s (Jarod Joseph) murder trial a year after her perilous encounter with him.

Mistresses is about girlfriends leaning on each other as they navigate their relationships and seek self-discovery. Adapted from a British series of the same name.

On tonight’s show per the ABC synopsis “in the Season 4 opener, Joss testifies at Wilson’s murder trial a year after her perilous encounter with him. Meanwhile, Marc has employment problems; Karen thinks her male nanny is making advances toward her; and April fears Lucy is growing up too fast.”

It’s been one year later since last season’s finale shocking and, although she managed to survive Wilson the cracked out assistant, Joss wasn’t ok.

Joss had apparently been held captive by Wilson Corvo on last season finale when he ultimately decided to simply tie her up while he dealt with other loose ends. So thankfully Joss had used that time to wrangle herself out of a nasty situation and make her own escape while she was still able to get away from Wilson before he could her physically harm her. However, psychologically, Joss was still recovering from what happened. She had been tied up and essentially left for dead because she had gotten in the way of Wilson’s grand plan.

Later, though, once she had made her escape, Joss had gotten help and Wilson had gotten arrested for the murder of Luca Raines. Yet the fear she had to live through and the fact she didn’t know if she wasn’t going to live or die was something that no one could “just” get over. So Joss couldn’t put Wilson to the back of her mind even if she wanted to.

First, there had been a trial where she had been asked if Wilson seemed competent to stand trial and then came the trial itself that lasted up to a year. So Joss kept having to think about what nearly happened and relive it during every testimonial. And she couldn’t necessarily leave town during the trial to go be with Harry because there was always the chance she would be recalled to the stand so Joss had stay close to see Wilson’s trial through to the end.

But luckily the trial was finally wrapping itself up on tonight’s episode of “Mistresses”. So Joss’s friends were forever by side lately making sure that she was ok. And she told them that she was. Even saying that she was glad that a guilty verdict finally came down and that Wilson was going to be a life sentence yet no one was buying her story. At least not her friends or the prosecutor on the case because they all at one point or another had suggested that she see someone about the trauma she had endured.

So the only person that remained oblivious about Joss being “too fine” was Harry. Harry had been mostly out of the century, making a name for himself. And therefore, he didn’t really have time to second guess the things that Joss might say or do. He just went along with it because he had other things on his mind. Like how to propose to Joss without her getting wind of what was about to happen.

And so Mark as in April’s Mark was able to help out with that. Mark had been acting as Harry’s sounding board so he had helped Harry set things up for the moment Harry was going to being proposing to Joss and in return Harry supported Mark’s idea. Mark it seems had wanted to renegade on a plan he had come up with April’s help so that he could pursue a music career.

Unfortunately for Mark, he had told April that he wanted to go back to school to earn his drug counselor’s degree so that he could begin to pull his own weight around the new place that April had downsized to. But suddenly he changed his mind. Mark was supposed to teach guitar lessons on the side to pay his way through his school yet he said that playing again reminded him how much he loved it. And now he wants to pursue music again because he thinks he can make a go of it if he were to join his friend Jonah’s band.

So naturally April later tried to get him to change his mind again, but Mark refused to back down. He said that music was what he wanted to do and he called April on sticking so rigidly to plans because she was a near control freak. April wanted things in a certain with him and she also did that with her own daughter. Which is why Lucy didn’t even bother explaining who the guy she was hanging out with.

Lucy had taken several photos with some teenage boy and she had told her mom that the guy was just someone at school however that was far from the truth. Lucy actually likes that guy and she had lied about their relationship because she didn’t want her mom to worry or overreact. So April didn’t see how much her own reactions were pushing the people she loved away until Karen’s book reading.

Karen had had her baby and she had even written a book about her complicated relationship with both Vivienne and Alec. So the book covered the entire mess that was Karen’s love life. Starting from when she met Alec and his wife, going into detail about how they became part of a polyamorous couple, and it covered Vivienne’s ultimate death as well as Alec’s abandonment. And so Karen’s book had all the making of a bestseller, but she needed a publisher that knew how to publicize her unique take.

And so Joss volunteered her own PR services in order to get Karen the publisher she needed. But Barbara Rutledge wasn’t all that impressed with either Joss’s hard sell or Karen’s first book reading which ended in Karen leaking through her shirt because she was still breastfeeding little baby Vivienne. So what really sold Barbra on the idea to represent Karen had been the man she thought was Karen’s husband yet was her manny. Manny being a male nanny.

Anyways the manny was hot and Barbara appeared as if she appreciated his looks even as she thought he was Karen’s husband. And thereby off-limits. So either the book about a polyamorous couple created something here or there was just something that was always there. Though, regardless of what Barbara thought, she wasn’t the only one that was interested in the manny. Karen was also interested and the book give her the chance to close the Alec chapter so it looks like she might be ready for something new, too.

Although the book reading itself wasn’t a complete disaster. It had help April realize that maybe she should try talking to Mark again and stop dismissing his dreams out of hand. So she later went back home and apologized to Mark for telling him that his dream of being a musician wasn’t going to work out. And she finally admitted that she was jealous. Jealous that he got to go out and find his passion while she had to give up her own (which was art) when she got pregnant with Lucy.

So once she thought about it, April came up with a new plan for herself. She decided to hand over some additional responsibility of the store to her assistant and she told Mark that she wanted to apply for an art fellowship so that she could try to take a chance as well. And while the plan was admittedly not perfect, it did manage to at least make both April and Mark fine with each other’s decisions.

And though it wasn’t the most perfect time, Harry did manage to propose to Joss during the final minutes of tonight’s season premiere.

Harry had it all planned and it had been a romantic proposal that Joss hadn’t seen coming. But by the next morning, she was back to business and that meant continuing an extreme version of self-defense boxing that she took up following her kidnapping. And that also leaves her covered in bruises that Harry hasn’t gotten a chance to see yet.