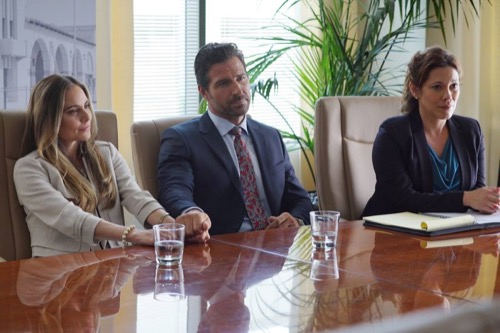 Tonight on ABC their new drama MISTRESSES continues with an all new Tuesday, August 2, season 4 episode 7 called, “Survival of the Fittest,” and we’ve got your Mistresses recap down below! On tonight’s show custody, issues arise regarding Vivian.

On the last episode, Alec visited unexpectedly and disrupts Karen’s life with his news. Meanwhile, April and Marc clashed on a parenting issue; Kate learned that her new beau had a connection to Joss and Harry, and Harry’s business partner invited him and Joss to Las Vegas.

On tonight’s show per the ABC synopsis, “custody issues arise regarding Vivian. Meanwhile, April discusses a mature topic with Lucy; Kate keeps her new beau a secret from Joss and Harry and Joss’ actions lead to problems with Harry and land Jonathan’s nephew in the hospital.”

Tonight’s episode is going to be an exciting one filled with drama that you won’t want to miss in our Mistresses recap– the producers know they need to get you interested, therefore you can expect a great show. Be sure to tune in for our live Mistresses recap tonight at 10 PM EST!

Joss’s greatest mistake wasn’t just about beating up Jonathan’s nephew because that at least was understandable. However, it was the fact that she lied afterward and had basically tried to ignore what happened by continuing to lie to Harry until someone else told him the truth on tonight’s episode of “Mistresses” that turned out to be the problem. So Harry had a right to get upset when he was dragged into Jonathan’s office and was told one version of the story because not that surprisingly Rezza had no problem with lying about what happened that night in Vegas. And unfortunately, it’s his version that everyone heard first as well as the one his uncle was more willing to believe.

Jonathan believed his nephew Rezza when he says that he got into a fight with his girlfriend and that Joss had misconstrued what she had seen when she attacked him. So Rezza had wanted to press charges and the only way his uncle could talk him down was to offer up a compromise. Jonathan had talked Rezza into agreeing to accept an apology from Joss if she gave one in exchange for pressing charges so Jonathan had basically asked Harry to see that Joss apologizes. But Harry hadn’t wanted Joss to apologize because he later believed her when she said that Rezza had thrown his girlfriend into a wall so the only reason Harry had tried to talk Joss into apologizing was because of the threat. He didn’t want his fiancée to face assault charges so he was prepared to do anything to see that she didn’t get arrested.

Joss on the other hand, didn’t see it that way. Joss had first gotten angry with Harry because she didn’t think Rezza deserved an apology and then even as she let Harry convince her it was the right thing to do – she then had to put with Rezza. Rezza it seems had wanted to make Joss grovel so he hadn’t been happy with her apology that was admittedly a little lackluster and so he had demanded that she beg him. Yet, Joss had had enough so she told Rezza that he could throw her in jail if he liked because it didn’t matter. She said that she had been down that route before and that she knew for a fact that the truth will always win out. So Joss had walked away from the meeting believe that everything was over and was a bit thrown when she returned him to an upset Harry.

Harry hadn’t cared what Rezza said to antagonize her. He thought Joss should apologize in order to save his working relationship with Jonathan. So that had confused Joss because she thought that Harry would quit working with Jonathan because of what Rezza and he tried to do by covering what happened to Rezza’s girlfriend so she had ended up telling Harry to just quit. Though Kate went on to tell her brother differently. Kate had told Harry that he had to make the decision that was best for him and that it hadn’t been fair for Joss to issue an ultimatum because it’s not like there were a bunch of gazillionaires out there willing to give Harry another restaurant. And so Kate had talked her brother into continuing to work with Jonathan even if her reasoning was slightly selfish.

Kate had told her brother to do what he felt was right because that’s what she wanted to do for herself. Kate had begun seeing Joss’s ex-fiancée Scott and Scott had said that he would only feel comfortable in moving forward with their relationship was if they had both Joss and Harry’s blessing. So Kate had said that she would talk to them and that she would get their blessing. But she ended up changing her mind at the last because secretly she knew what they would say. She knew that they would disapprove so she hadn’t talked to them and had chosen to instead lie to Scott when she told him that she didn’t get their approval.

Although to cover her bases, she did tell him that it would best if they didn’t all get drinks together anytime soon. So Kate had said whatever she needed to get her own happy ending and had told Harry do the same. Harry though had been a little more considerate. He had chosen to go to Joss and be direct with her so he had told her that he was going to continue working with Jonathan. Who by the way had talked his nephew out of pressing charges despite Joss refusing to apologize. And so Joss hadn’t been happy with Harry decision to work with Jonathan yet he hadn’t been happy with her decision to stay at the Impact gym so that had been left at an impasse.

Karen and her ex Alec on the other hand, had reached an agreement. Alec had realized that he had been too harsh when he had tried going after full custody so he and Karen ended up talking things out and they now agree that they try sharing little Vivienne before ripping her into two. So Karen had been relieved when she found out that Alec wasn’t going to use her past phone calls, in which she told him that she was going to get an abortion, against her to prove she was an unfit mother and that she wasn’t going to be needing Dominic’s help to fight a prolonged custody battle. Dominic was Savi’s ex and so the ladies didn’t like to bother him, but truthfully Dominic didn’t mind.

Dominic was simply a nice guy. However, Marc was also a nice guy so he shouldn’t have risked his relationship with April by continuing to have a flirtatious relationship with his ex. Marc’s ex Sofia had joined his band so the two have been working closely together and that seems to have given Sofia the impression that she could backpedal. So Marc could have been clear and told her that she shouldn’t say some of those things because he was with April now and they were happy yet he hadn’t shut Sofia down. And therefore he proved that April’s theory about guys were right.

April had given her daughter the sex talk and she had told Lucy that she shouldn’t believe everything a boy might tell her because they could be lying. But April had later back pedaled on what she said because she didn’t want her daughter to mistrust all men or think they were mistrustful. So April might regret that conversation if she finds out that Marc was busy flirting with his ex when he was supposed to be working. And when April later found out there had been a car crash, we had all just hoped that Lucy was ok and that her boyfriend hadn’t been doing something he wasn’t supposed to do.