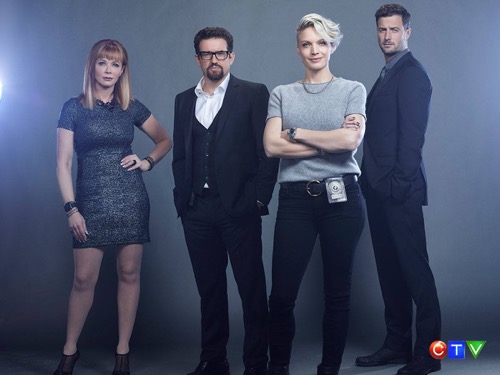 Motive returns to the USA network tonight with an all new Sunday, July 3, season 4 premiere called, “The Vanishing Policeman,” and we’ve got your Motive recap down below! On this evening’s episode, in the Season 4 premiere, the work dynamic changes between Angie (Kristin Lehman) and newly minted Staff Sergeant Vega, (Louis Ferreira) as they pursue a cop-killer.

Motive follows a female homicide detective (Kristin Lehman) through twisted, complicated and diabolical cases on her quest to analyze the evidence and to ultimately discover the Motive.

On tonight’s episode per the USA synopsis, “Angie and newly minted Staff Sergeant Vega must adjust on the fly to their changed working dynamic while dealing with the added pressure of bringing a cop killer to justice.”

Tonight’s Motive recap looks like it is going to be great and you won’t want to miss it, so be sure to tune in for our live coverage of USA Network’s “Motive” at 9:00 PM EST! While you wait for our Motive recap hit the comments and let us know how excited you are for another episode of Motive tonight.

It was newly created Staff Sergeant Vega’s first day on tonight’s season four premiere of “Motive” however, he had been given a trial by fire when his first victim on the job turned out to be a cop.

Uniform Officer Greg Schultz had apparently committed suicide out in the open for all to see. But there were a few things off about this case that were just not adding up. The victim had shot himself with what appeared to be his father’s pistol rather than his own service weapon which was unusual because officers tend to commit suicide with that service weapon as a way to say the job drove them to it. Another thing, though, that was odd was the fact that there were four witnesses to the suicide itself and no one person could say what actually happened. They said they saw a man that clearly was a cop because of the uniform approach the waterfront and then the next thing they noticed was the gun going off.

The gunshot was what both frightened and alerted everyone that something was going. Yet, the people that were the closest to the victim didn’t look up to see what was going on. Instead, they promptly chose to take cover as a sane person would do. So no one actually saw the victim shoot himself much less climb over the pier therefore, they didn’t realize that they were safe until they heard the splash. Which was when the victim went over into the water. And so Vega didn’t just get a tricky case, he got one with absolutely no winners that could potentially ruin his career if he wasn’t careful.

Though the case wasn’t even the worst of it. A new detective had been brought in to replace Vega out in the bullpen and unfortunately the new guy got the job because he was a legacy. Detective Mitch Kennecki was the son of someone something or another and he was also a jerk. An insensitive jerk that was quick to assumption and basically tried to treat everyone like crap until he accidentally dismissed Vega. Vega was kind enough to let that miserable first impression go, but Kennecki wore out his welcome as the day went on and so the only reason Vega didn’t ultimately fire him was because the younger man was the son of someone with a much higher pay grade.

Kennecki however never realized that he was dancing on the thin ice. When the Medical Examiner got back to them about Greg, she stated that the victim couldn’t be conclusively ruled either suicide or homicide. She said that the victim had fish bites on him that proved he was in the water a lot longer than the original time of death they were working with and that the victim didn’t have a single ounce of gunpowder for someone that should not have been in the water that long. So later Kennecki who had heard how confused Betty was with the evidence she had been given, was quick to state homicide.

He had neither the experience or the medical know how to make such a call yet he did so anyway. So it had been up to everyone around him to pick up the pieces from there and luckily for him Angie was able to prove it was without a doubt homicide. She had been given what she thought was a video of the victim right before he died and the video showed a man with his baton on the wrong side. Greg had apparently moved his over to his left after an injury on his right made it uncomfortable for him to carry the baton the way he normally would have. And therefore the man in the video (or the person that the many witnesses spotted on the pier) was not Greg Shultz.

Someone had driven Greg’s car, wore his uniform, and even killed him with his father’s weapon but Angie proved that Greg had been killed. So the only thing that the cops hadn’t known was who killed him and why. Kennecki of course, had a theory. He thought and basically told everyone within hearing distance that the wife looked good for it. He said that she was the only one that had access to everything and he felt his circumstantial evidence was enough to arrest Lori Shultz. Though Kennecki crossed the line when he pitched his theory to Police Chief Jennifer Wells. Wells had wanted to close this case fast so she chose to listen and even support Kennecki over Vega because Kennecki was the son of District Commander Kennecki.

So Kennecki got what he wanted when he arrested Lori though he later refused to believe either Angie or Lucas when they said they didn’t have enough to hold her. The more experienced detectives had tried to tell Kennecki that they could go arresting everyone based on flimsy excuses and how doing that could get the actual killer off. But Kennecki didn’t understand nor did he want to. He thought it was Lori so when he was asked then who was her accomplice that had worn Greg’s uniform he came up with Greg’s partner. He said Greg’s partner spoke of Lori as if he was in love with her so he thought that must mean they were having an affair.

However, there was no affair. Lori’s telephone records showed that if she was calling anyone all the time then it was her brother-in-law Murray. Who seemed like he was her only friend. Murray was a stand-up comedian and he was as different as Greg as night and day. So one didn’t automatically think affair when they thought about Murray and Lori yet Angie decided to check it out by approaching Murray and telling him Lori was looking good for the murder. Angie said that if they didn’t find anything new that Lori would go away for Greg’s homicide and probably never see her son Max again. And like Angie suspected, that was just the thing to push Murray overboard because he did care about his sister-in-law.

Murray who was a recovering alcoholic was also a lot nicer than Greg though he didn’t seem as if he could be violent. Murray was one of those guys that used humor to deflect what was going on around him so a little digging into his background provided the motive for his brother’s murder. Murray had killed his brother because he had seen Greg abuse his wife just like their dad used to abuse their mom. Their mom had a track record of unexplained injuries and her last “clumsy” fall down the stairs was what ended up killing her. So Murray had sadly witnessed his own mother’s murder and he had killed Greg to prevent his brother the cop from killing Lori.

Lori being someone he loved like a sister and nothing else. But Lori hadn’t helped Murray with what he had done. She had no idea that anyone knew or suspect that she was being abused. So she hadn’t known that Murray would take action. Murray though had held onto a lot of things he shouldn’t have.

Murray it seems had never told anyone that used to take his brother’s beatings because he had tried to protect Greg as a kid. Yet, that same thing made Greg look at Murray as if he was weak and probably deserved those beatings because their dad had never hurt him. So it wasn’t until Murray realized that his sacrifice had been for nothing that he acted and finally stopped his brother from hurting his family. And yet Kennecki still found a way to take a credit for Murray turning himself in.

Kennecki said that if he hadn’t arrested Lori then Murray would never have confessed so Kennecki apparently believes that he was responsible for the whole team catching a cop killer.