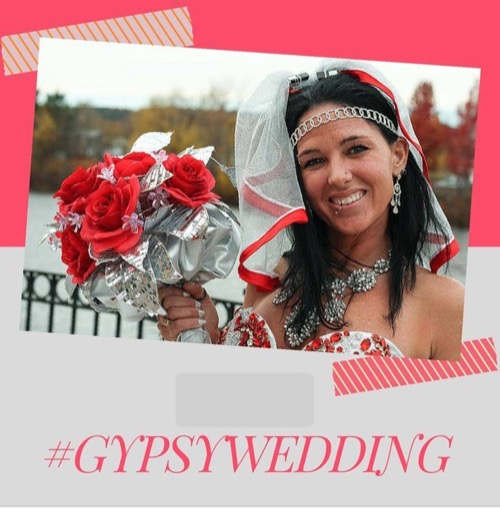 On the last season 4 finale, four gypsy teens in search of love prepared for the annual Gypsy Ball, accompanied by a ton of family drama.

On tonight’s episode per say the TLC synopsis “Maquayla can’t wait to wear her dream wedding gown, but disaster strikes when it arrives; Mom plans to use Yazzie’s birthday party to marry her off, but things take a turn when her boyfriend makes an appearance.”

Tonight’s episode is going to be an interesting one, which you won’t want to miss. So be sure to tune in for our live coverage of TLC′s My Big American Fat Gypsy Wedding recap of the season 5 premiere at 9PM EST! While you wait for our My Big Fat American Gypsy Wedding recap, hit the comments and let us know how excited you are about the new season tonight.

Tonight’s episode of “My Big Fat American Gypsy Wedding” starts off with Maquayla, a young gypsy who works two jobs in order to provide for herself. She wants a flower-filled wedding with her future husband Thomas, a self-proclaimed “redneck gypsy”. Thomas is in between jobs so it is up to Maquayla to pay for and plan the big wedding. She contacts Sondra to request a dress made of real flowers, preferably yellow Gerber daisies.

Sondra gets started on the daisy dress, calling it the biggest obstacle in her career. The big problem with the dress will be keeping the flowers vibrant and alive long enough.

Yazzie hopes to plan the perfect Sweet Sixteen gypsy party. Her mother Deanna wants Yazzie to follow tradition by getting married at sixteen and starting a family, but Yazzie has other ideas. Her mother is hoping that she will meet her future gypsy husband at the party. Yazzie has been secretly dating a non-gypsy boy, Anthony, for over a year and a half. She wants to announce their relationship at her party.
Back at Sondra’s studio, the dressmaker contacts Maquayla to tell her that she is unable to make a dress out of the daisies. She tells the bride-to-be that she can still make a dress out of flowers but Maquayla has to let her choose an alternative flower. Despite her misgivings, Maquayla agrees. Sondra goes to a florist to select an array of flowers that will stay alive long enough for the wedding. Her staff must work 24/7 in cold temperatures in order to get the dress done on time without any wilting.

Deanna finds out that Yazzie is dating Anthony after a member of the community spots them out on a date and is furious. Deanna forbids her from seeing him anymore, telling her that the point of the party is for her to find an appropriate husband. The next day, Yazzie and her mother go through one of their ancestor’s jewelry and discuss gypsy persecution during the Holocaust. Yazzie develops a new understanding of the importance of marrying a gypsy to continue their traditions.

With only three days before her wedding, Maquayla goes to Boston to see her dress for the first time. The bride is thrilled with the 3,000 flower dress. Maquayla walks down the street in her dress and is thrilled with the response from spectators. Meanwhile, Yazzie breaks off her relationship with Anthony because he is not a gypsy. Both are heartbroken.

Sondra and her team pack the dress in a special air-conditioned truck and send it to Maquayla. Despite the team’s best efforts, all the flowers on the dress were dead by the time it arrived and with only two days left before the wedding, the bride has a meltdown. She contacts Sondra, who is shocked to hear that all the flowers are dead. Sondra tells Maquayla that she will fly down to rebuild the dress. Meanwhile, Yazzie is getting ready for her candy-themed party, trying her best not to think about her recent break-up. Sondra’s specially crafted dress arrives and the birthday girl is thrilled with the outcome. Deanna decides to get down to business and has her daughter meet some eligible boys. Yazzie dances with one of the potential candidates to please her mother. Anthony shows up unexpectedly to present her with a birthday present and tells her that he loves her, before abruptly leaving. Inside the gift is a wedding ring and Yazzie is overwhelmed with emotion. Deanna is furious and worries that Yazzie will never agree to marry a gypsy boy after Anthony’s proposal.

The next day, Yazzie goes to lunch with Anthony to discuss his proposal. She tells him that she is too young to get married and returns the ring he gave her. She then sits down with Deanna and tells her that, while she turned down Anthony’s proposal, she isn’t ready to marry anyone, gypsy or otherwise. Her mother agrees that Yazzie can finish high school before being wed. Meanwhile, Sondra arrives in West Virginia and buys every pink and white flower that the local florist has in hopes of repairing the dress in time. Upon seeing the ruined dress, Sondra is overwhelmed and unsure that she can complete the project on time. While Sondra rushes to complete the dress, the guests and party are waiting at the location.

With the dress finally complete, Sondra shows the dress to the bride, who is thrilled with the redo. She hops into the back of a pickup and is driven to the wedding location, hours late to her own ceremony. Thomas is blown away by the dress and the two say their vows next to a lake, surrounded by friends and family. She caps off the night by telling her husband that she is pregnant.