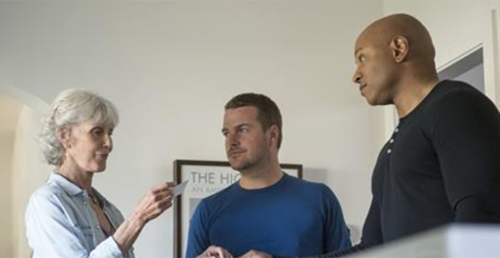 Tonight on CBS NCIS: Los Angeles returns with an all new Monday, October 2, 2016, season 8 episode 3 called, “The Queen’s Gambit” and we have your weekly NCIS: Los Angeles recap below. On tonight’s episode, the team investigates an abduction case while down two members, with Hetty (Linda Hunt) being held in Washington, D.C., for questioning.

On the last episode,  The team traveled to Syria to apprehend a High-Value Target but the mission went awry and one team member was severely injured.

On tonight’s episode as per the CBS synopsis, “The NCIS LA team investigates an abduction case while down two members, with Hetty being held in D.C. for questioning, and another still in the ICU following the mission in Syria.”

A Muslim man was kidnapped right outside of his own Mosque on tonight’s episode of “NCIS: Los Angeles”. However, there was a reason this case was NCIS and it wasn’t because of the victim or his faith. It was actually because of the perpetrator. The woman that had purposely sideswiped her intended target in order to overpower him and through him into her truck was a military reservist that was allegedly working for some non-profit. Her name was Jasmine Garcia and she had recently come back from her tour in Afghanistan and so it wasn’t surprising that her victim had also come from that country.

Her victim had been Gabriel Mir and he had been born in Afghanistan. So the theory that NCIS was working with when they first got this case was that Jasmine either got really lucky with her choice of victim or she knew him from Afghanistan. But Gabriel’s brother had vetoed one of those theories. Ben Mir said that he and his brother came to this country as kids yet neither of them have been back to their home country since then. Ben also mentioned that his brother attended his mosque habitually while he was more in lax in his faith. And so that’s why he hadn’t been with Gabriel when Gabriel had been abducted in broad daylight.

Yet, there was no need for Ben to feel guilty about that because Eric and Nell found out that Jasmine had leased a warehouse. NCIS had naturally checked out Jasmine’s house first though all they found was a frisky housekeeper and a house in perfect condition. So Eric and Nell had checked out other properties and that’s how they found out about the warehouse. The same warehouse as it turns out that Jasmine had locked up Gabriel. Gabriel had been bound and gagged when Sam and Callen found him. And other than that, he was considered to be ok physically and he wasn’t hesitant about talking.

Gabriel had claimed that he had never met Jasmine before and that he thought she had originally panicked when she kidnapped him because she didn’t want to be sued. Though when she tied him up and stashed him at the warehouse, that’s when he gave up the idea that she had merely panicked and assumed she had taken him because she was a serial killer. So Sam and Callen had to put Gabriel’s fears to rest on that one. They told him that women are rarely ever serial killers and that they hadn’t found any evidence that’s eh had done this beforehand. And so NCIS didn’t really know why Jasmine took Gabriel.

Another theory, though, did seem plausible. NCIS thought Jasmine might have PTSD. PTSD would explain Jasmine’s aggression and the fact that she chose to kidnap Gabriel. Gabriel was obviously Muslim because she had seen him leaving his mosque and Gabriel also had middle eastern coloring. So they wondered if Jasmine kidnapped Gabriel because she wanted revenge for what she might have done or seen in Afghanistan. However, there was something about Jasmine that didn’t allow them to believe she might have PTSD so NCIS chose to go with the simpler method of finding out why she took Gabriel by just asking her.

NCIS had planned a trap for Jasmine at the warehouse and they were able to capture her despite their limited man power. Unfortunately, Kensi was still in her coma and Hetty was stuck in Washington playing mind games with the Under Secretary, but Nell has been working out lately and she was quickly becoming a force to be reckoned with. So Nell was able to take down Jasmine and Jasmine was brought in to answer questions whether she liked or not. Though what Jasmine wanted and what NCIS couldn’t deny her was her lawyer. Jasmine for some reason or another had already had a lawyer on speed-dial so she called her in.

But the lawyer Jasmine had called hadn’t really cared about the serious charges that Jasmine was facing because she said most of what NCIS found was inadmissible. Jasmine apparently had been in the middle of her own investigation when NCIS barged in and stopped her before she could extract information from Gabriel. So what Jasmine had her lawyer then wanted was an agreement on the table and only then she would tell Sam and Callen what was really going on. And so the guys agreed to the agreement because they suspected that Jasmine’s behavior could be easily explained and they wanted to find out about her investigation.

Jasmine it seems had met several ISIS brides while she was serving overseas when she ended up meeting quite a few that had originally been from the US. So she talked to these girls and found out their stories however what she found out was that Gabriel’s cousin had pulled a scheme back in the states where he convinced these girls that they were about to have their big break when truthfully he had set them up to be ISIS brides. Yet, what Jasmine failed to understand was that Gabriel didn’t have contact with his cousin and that he wouldn’t be able to her because of that. And therefore Jasmine’s plan in somehow using Gabriel to get to his cousin was always going to fail.

Where Jasmine tried to get close to Bryson Khan by using his family, NCIS were able to conduct a ploy of their own that actually allowed them to capture Bryson. NCIS had found out how Bryson was able to lure the girls and they sent Nell there to act as a model wanting her own chance. However, Nell wasn’t really a desirable ISIS bride and she was about to be passed over when Nell decided to show of her bade and just arrest Bryson herself. So Bryson was brought in and he questioned about the girls he helped kidnapped. And he wasn’t surprising that he crumbled under the pressure.

Bryson had said where the Dutch guy was going to because he didn’t know the man’s name and he had also let NCIS know that the girls were being shipped out. So NCIS barged their way in and they were able to rescue the girls though it will be a long time before any of them will be ok. But in other news, Hetty had been cleared by the Secretary to go back to her unit and so she will be rejoining her team soon.