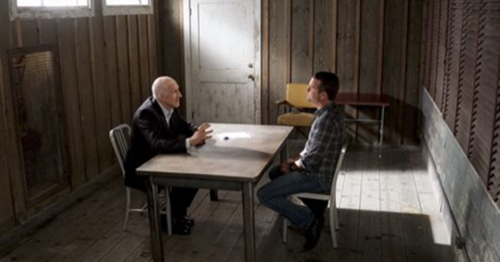 Tonight on CBS NCIS: Los Angeles returns with an all new Sunday, November 20, 2016, season 8 episode 9 called, “Glasnost” and we have your weekly NCIS: Los Angeles recap below. On tonight’s NCIS Los Angeles episode, Callen (Chris O’Donnell) interrogates his father after he is found in an NCIS patient’s hospital room during a radiation poisoning case. Meanwhile, the team discusses their Thanksgiving plans.

Artem Fedor was back on tonight’s all new episode of “NCIS: Los Angeles” and he was finally ready to talk to NCIS about the information he had been keeping to himself. But NCIS didn’t know if they could trust him. They had apparently arrested Artem back in Febuary and he hadn’t been ready to talk to them then however him changing his mind of all sudden seemed strange and so they were little bit mistrustful about his information. Artem claimed that he knew about an assassination and that he even had the name of the victim. So they checked out the person he named and they couldn’t understand why anyone would target Mary Reynolds.

Mary didn’t work in any federal agency or lived a high-risked and she was a simple dialect coach. However, the victim’s life as Mary Reynolds had simply been her cover and it turns out Mary’s real name was Katerina. So finding out that Mary had been lying about her life had finally helped make things clearer and it wasn’t a coincidence that she had been poisoned with Polonium 210. Polonium 210 was the favorite poison of the FSB which was like the CIA for the Russian government. They usually eliminated people they felt were a threat to their way of life and sometimes the lines became so blurred that their reasoning often came off as skewed.

Such as a case when the victim or target was usually a political rival of the ruling party. Though NCIS had gotten some assistance in Katerina’s case. Same and Callen had reached out to Arkady who was his usual shifty self and they found out that someone had snuck Katerina out of Russia many years ago. So the guys were working on Arkady to see if there was anything else they needed to know when they were alerted that someone had tried to kill Katerina at the hospital yet there was one problem with the case. The man that had seemingly tried to kill Katerina had in turn been killed by Callen’s father of all people. And so the case became personal for Callen.

Callen hadn’t seen his father since he escaped Russia some months ago and so it was jarring to see the other man had not only left his farm, but had made it into the states without ever trying to seem him. Yet, the man of names had said that he had merely come to the states to do a job. He had been hired after Artem’s arrest to find Katerina and so he was in the states to protect her because she was the only one that could take down Pavel Volkoff. Pavel Volkoff had sometimes been a friend to NCIS only Callen’s father had Pavel often helps people when he gets something out of it and that his enemies were looking to bring him down.

Pavel it was revealed had been in power for quite a long time and a rival faction had wanted to remove him. So the rival faction hired Callen’s father to protect Katerina because she had once been Pavel’s mistress and had known some of his secrets. Like what happened to the millions of dollars that went missing one day. But Callen’s father had also mentioned that Pavel found out what his enemies were planning and had tried to take out Katerina himself. Katerina had known where the money went and the same people that demanded its location had also tried targeting Katerina’s daughter Alexandra to find out if the money was even still around.

It was quite a lot of money after all and so it would be natural if someone wanted to claim that money for themselves. However, both Sam and Callen felt that his father wasn’t telling the whole truth. Why would Callen’s dad want to risk his own life to come out of hiding? So Hetty told the guys she would handle the former KGB officer while they looked for Alexandra though she of course did her own thing in the end. Hetty and Callen’s dad had a working relationship in the past so that allowed her to speak with him honestly and she ended up finding out what was really going on. Hetty found out that no one had hired Callen’s dad to find Katerina and that the case was personal for him.

Callen’s dad had once been Katerina’s handler and he had pulled her out of Russia when things had gotten to be too dangerous for her. So Katerina was actually poisoned to lure Callen’s dad out of hiding and it worked. He did go running to Katerina’s side and, like Hetty suspected, he went running to Alexandra’s side after Katerina died because he had still wanted to protect Katerina’s daughter. Though there was only one way to protect Alexandra and that was to hand over the money in exchange for her life yet Garrison had another secret. Garrison had apparently donated the money many years ago to war refuges because he thought it should go to good use.

So what Callen’s father had actually done was arrange his own funeral. The FSB agents that Pavel had sent after him had been told that they needed to bring the money back to Russian however that was impossible for them to do without torturing Callen’s dead. Yet, thankfully Hetty’s little game worked out in the end. Hetty wouldn’t have risked Garrison’s life which he knew so he just waited out the brutal beatings until Callen could come to rescue and later Callen finally got to get the heart to heart that he desperately needed. And so he found out why his father had abandoned him and his sister, but he also found out that he has another sister.

Callen’s father had recently found out that Alexandra was his daughter and so promised his son that they were going to tell her the truth just so that there wouldn’t be anymore secrets in their family.