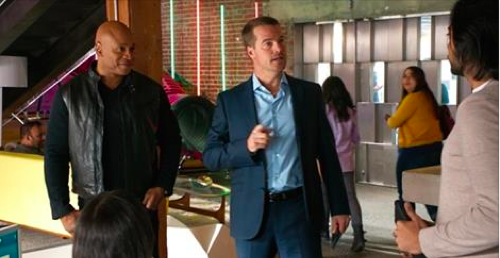 Tonight on CBS NCIS: Los Angeles returns with an all new Monday January 18, season 7 episode 11 called, “Angels & Daemons” and we have your weekly recap below. On tonight’s episode, the team investigates the murder of a tech entrepreneur turned venture capitalist who secretly developed a daemon.

On the last episode, Kensi and Deeks went undercover at a decommissioned nuclear power plant as the team investigated the radiation poisoning of a Gunnery Sergeant moonlighting as a security guard there. Did you watch the last episode? If you missed it, we have a full and detailed recap right here for you.

On tonight’s episode as per the CBS synopsis, “the team investigates the murder of a tech entrepreneur turned venture capitalist who secretly developed a daemon, a background computer program that allows for undetectable data collection.”

Tonight’s episode looks like it is going to be great and you won’t want to miss it, so be sure to tune in for our live coverage of CBS’s NCIS: Los Angeles at 10:00 PM EST! While you wait for our recap hit the comments, let us know how excited you are for the season 7 episode 11 and what your favorite part of this season is so far!

The body of Larry Overson was founding floating at the nearby marina on tonight’s episode of “NCIS: Los Angeles”.

Apparently the billionaire tech entrepreneur had been murdered on his private boat and then dumped overboard but the reason his death resulted in an NCIS investigation was because of Overson’s former life as a Navy Intelligence Officer. And the fact he had also once been assigned to the NSA.

Therefore, there were certain people in Washington that needed answers about what had happened and what they wanted to know more than anything else was if Overson’s death had anything to do with his former occupation. And so at first the agents working the case had gotten lucky. Nell had ended up finding a credible suspect thanks to security cameras at the marina and she didn’t think their suspect was a spy for some foreign government. She just thought Mark Powell wanted Overson dead for his own reasons.

Mark you see was quickly discredited as a spy because he hadn’t been just anybody. He had been Overson’s former best friend and Naval Lieutenant. And together they had created that ant-virus program called Overguard that had made Overson rich. Though Mark had tried to fight him in court for his share of Overguard and sadly that resulted in Mark losing all of his savings in lawyer’s fees.

Back at the station, Mark had told the guys about what had happened between him and Overson. He said Overson had called him out of the blue asking to talk and that it had initially thought Overson was finally going to apologize. Only that hadn’t been the case.

Rather than apologizing, Overson had accused Mark of selling off a program they had created while they were in the NSA. The program had been called Daemon and it seems it was capable of collecting massive amounts of data without anyone noticing. And thus it could be sold at a great amount of profit. However, both men had agreed to never sell it or hand it over to the NSA.

They had found out about what the NSA had really been doing with their other programs and they realized that in the wrong hands such a program like Daemon could be dangerous. So when Overson had later found that program in an app – he had thought Mark had gone back on his word. Which he said he hadn’t. Not technically anyways.

The app that Overson had been talking about had belonged to company he had been thinking about investing in. Flipbit had grown to have a million users but he had needed more funding in order to keep up. So Overson as an Angel Investor had been checking out new startups that showed promise.

Only he saw the program he had created hidden in their app and had wanted to stop what he thought Mark had started. Only Mark denied everything. He said he hadn’t known that their program had been in use. But he did know how his lawyer was able to rob him blind.

Earlier, when he had been suing Overson, he had told his lawyer about Daemon in hopes of discrediting his once best friend and his lawyer had also been given access to all of Mark’s files.

So Mark theorized that the lawyer, Wilson Rowe, must have gone behind his back to sell the program. And Kensei and Deeks were going to ask Rowe about the backdoor deal when someone had then taken out Rowe. Rowe had been killed because either had set the killer on Overson or had warned the killer about Overson. In other words, he died because he knew too much.

Yet Nell and Eric were able to determine that the shot that had killed Rowe had come from the top of the Flipbit building. Only Sam hadn’t run into his sniper on the rooftop. He had actually run into Noam Haber. An Israeli Mossad agent who had been acting as the company’s head of security when he was really hunting down a Pakistani spy.

Though seeing as they were on the same side, Sam had decided to drop the fact another agent had been hunting on his turf and head back to headquarters. Where he and Callen found out that the Daemon hadn’t really been in the app but in the automatic update. That had been schedule to happen later that day but which had been pushed forward. Probably after their spies must have learned his covers had been compromised.

And so the NCIS had to storm the building. They got the bystanders out of the way and they had found the Pakistani Agents who had eventually been brought down by both NCIS and Mossad. However, the American government knew that Pakistan still had the program and they had to pretend to be on friendly terms seeing as the Pakistani government had denied all involvement in what had been the biggest breach in security known to man.

Although, fortunately the Americans were able to come with their own program to fix the few phones that had been compromised. So that data sharing was over for now but Hetty said that as agents they were merely waiting for the next catastrophe.

And as for Mark Powell, he had told his lawyer about the Daemon in hopes of selling it. Which they were able to do. Therefore, he hadn’t been as innocent as he claimed and he had killed Overson because he had been afraid Overson would stop his upcoming payday.

So there was at least one person that the NCIS could arrest and he’ll now been known as a traitor for the rest of his life.