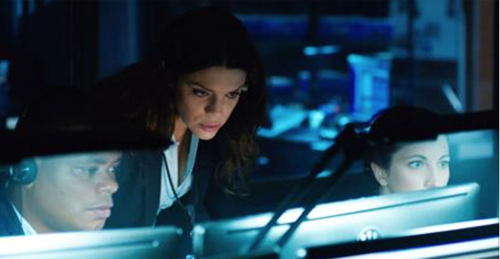 Tonight on CBS NCIS: New Orleans returns with an all-new Tuesday, October 11, 2016, season 3 episode 3 called, “Man on Fire,” and we have your NCIS: New Orleans recap below. On tonight’s episode, The murder of a decorated petty officer inside a sports arena leads the team to discover evidence linking the crime to the kidnapping of another petty officer.

The vibe between Percy and LaSalle was still pretty weird tonight’s episode of “NCIS: New Orleans” however there was one thing that they could both agree on. Neither of them were apparently happy that Special Agent Gregario was temporarily joining their team. Gregario was a fed and she thought like a fed. So she didn’t agree with many of Pride’s practices and everyone sort of knew that she was going to be stickler for the rules. But Pride and his team have sometimes played a little too fast and loose with that very same rule book so no one was actually happy that Gregario was going to be sticking around longer.

The NCIS unit down in New Orleans had thought that their review was over seeing as none of them had gotten indicted. So they didn’t want to mess around with that by having the very same woman that reviewed them join their team yet unfortunately Gregario had to stick around. Gregario had been asked by her boss to investigate whatever cartel angle that she might learn about and that could be possibly conducting business through many of the New Orleans’s ports so that’s why she had to stay on in the city. However, Pride had at least wanted to welcome her to the team and the city by working with her and not against her.

So Pride had asked Gregario to come along on a new case that had nothing to do with the cartel though he done so because he had wanted to show her that she was now part of the team. Yet, there was one major problem with that and that was Gregario. Gregario didn’t necessarily want to be part of Pride’s team so she purposely set out to set herself apart from everyone else and she showed off some of the standoffish behavior when they all went to the murder scene. Navy Petty Officer Collin Barrett had fallen from the catwalk at an abandoned sports arena and his death hadn’t been accidental. He had had defensive injuries on his hands and a gun had also been used.

Collin had been a decorated officer and there was nothing in his background that would indicate he would be involved in such a situation that happened at the arena. But Pride had thought it was best to check Collin’s digital imprint to see if there was anything that had been on record. So Gregario got to see firsthand how Plame would willing break several laws by hacking the dead’s officer information and she had thought it was surprising that she was the only one that cared about warrants. Plame had simply said that he could get the information faster by doing things his way and Pride hadn’t been upset by that because Plame did find something in Collin’s email.

Plame had found out that someone had sent a threatening message to Collin and that the person was former Army Ranger Hank Clarkson. However, when Pride and Gregario went to see Clarskson, they had heard a commotion coming from his house and had stormed the place because they thought someone was in danger when actually what they heard was just an argument. Hank had been holding onto with his wife Susan which Gregario had thought was something else. So Susan had to later plead with Gregario not to arrest her husband for a nonexistent domestic dispute. Susan had explanation what the agents saw and she hadn’t been afraid to say that it had been about Collin’s death.

Susan had been the witness that night Collin died so her husband had holding her when they when guys walked because she blamed herself for what happened to Collin. So both Gregario and Pride had wanted to know why she blamed herself yet it was a long story and the Clarksons didn’t know where to start. Susan and Hank’s son had apparently been kidnapped in Mexico while he was on R&R from the Navy. Their son, Petty Officer Drew Clarkson, had been flashing around some cash at a bar and had booked himself a VIP suite so someone down there had taken what he did to mean that he was rich and that his family would pay for him. Though the Clarksons didn’t have the money the kidnappers wanted.

The kidnappers had asked for half a million dollars. So the Clarksons thought their best chance at getting their son back was to report what happened to the FBI and the State Department however they had been told that the US Government doesn’t such ransoms as a policy because it would make people believe that they would always pay if one of their own went missing. Yet, that did nothing for the Clarksons and they had wanted their son back. Even if that went against policy! So the couple had tried asking someone else for help and that had been Hank’s old acquaintance from his military days.

Hank had known a military contractor who was used to make negotiation so he had called Logan Black to see if he could do anything. But Logan hadn’t been able to help them. He had tried and he had gotten turned down when Logan tried to negotiate the ransom price for Hank to something that was at least reasonable. So Susan had then called up Collin who she had grown up with and her husband had threatened him because he didn’t want to take the risk of furthering angering the people that had their son.

However, Collin agreed to help and Collin had died trying to getting information on Drew’s whereabouts. So Pride and Gregario had taken pity on the couple and they had tried to help though LaSalle hadn’t been happy with the plan they came up with. LaSalle had simply wanted to go down to Mexico and rescue Drew so he had been more than upset when Gregario said that’s not policy. Gregario had agreed to help, but she wasn’t going to turn her back on getting warrants and letting the State Department being the ones that rescued Drew.

So Gregario had placed a wiretap on the kidnappers and she had pinpointed their location however they had realized that she was tracing them and they had seemingly killed Drew out of revenge. Yet, thank god for Plame because he had run an analysis on what he had heard from that conversation with the kidnappers and he said they didn’t shoot Drew. He said that they instead had shot a brick wall and so he believed that Drew was still alive for some reason. And when he later told Pride what he found, Pride had thought of why the kidnappers had faked Drew’s death.

Pride had said that they could be holding onto Drew as some prisoner exchange or for something a little more nefarious. Though when he told his team, LaSalle had still wanted to rescue Drew like there weren’t any regulations why Gregario still wanted to follow the rules. She said that the rescue had to be left for someone else and that all they could do was hunt down Collin’s killer. Collin’s killer was Diego Martinez and Diego had also gone on to both torture and murder Logan Black before leaving fleeing back to Mexico. So Greagrio said that she could get a warrant for them to arrest Diego, but that they couldn’t take it farther than that.

Gregario had only gotten the warrant by asking her boss and she didn’t want to risk angering her boss by rescuing someone. So that’s why she wanted to stick to the rules and she had apparently thought Pride was going to follow those rules as well. Pride had said that he understood that he didn’t have the authority yet he took the first chance he could while in they were in Mexico to go rescue Drew. But, because he couldn’t do it alone, Gregario ended up going back on her word and chose to help Pride and his team rescue Drew. And luckily for her, she had also arrested Diego.

And so her boss eventually wanted to the full story because he wanted to know how they came to rescue Drew. However, Gregario had lied to him when she chose to cover for Pride and finally become a team player.