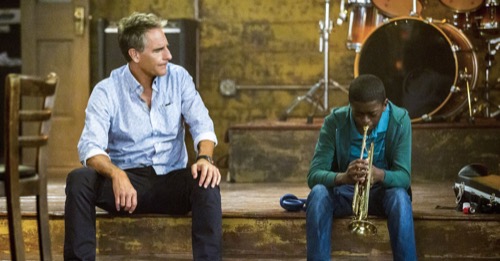 Tonight on CBS NCIS: New Orleans returns with an all-new Tuesday, December 6, 2016, season 3 episode 8 called, “Music to My Ears,” and we have your NCIS: New Orleans recap below. On tonight’s NCIS: New Orleans episode as per the CBS synopsis, “Pride (Scott Bakula) takes temporary custody of a victim’s nephew who witnessed the murder of his aunt, a petty officer and member of the U.S. Navy Band.”

The body of Naval Petty Officer Heather Cobb had been found after the local police had responded to what they thought was a domestic disturbance. Someone had apparently broken into her home and beat her to death. But what NCIS couldn’t understand was why. Heather in the Navy Jazz Band and she donated her free time to helping at risk children however someone had clearly wanted her dead and the one witness that could have seen something wasn’t talking because he was a mere kid. The kid’s name was Dustin Matthews and unfortunately Heather had been his aunt.

So Dustin was traumatized. He had been staying with his aunt because his mother was a Naval Officer and was on assignment in Japan yet she was notified about what happened and had said that she was getting on the next plane to see her son. However, in the meantime Pride thought that Dustin could stay with him. Pride had thought that Dustin could have seen something if he wasn’t telling them about it and so he kept trying to reach Dustin. Dustin on the other hand didn’t want down his guard and his teacher had even told Pride that.

Dustin’s teacher had said that Dustin was a musical prodigy though he was also very quiet and needed time to adjust to people. Yet, the one thing that Pride didn’t have was time. They had a promising lead and had wanted to ask Dustin if he recognized Petty Officer Josh Gordon. Gordon had played trumpet for the Navy and he had been good just not as good as Heather. So Heather replaced Gordon as first chair and he quickly began to harass not long after that. He would follow her around, call her names, and leave abusive messages on her answering machine.

Though Gordon eventually turned violent after he had gotten thrown out of the band altogether for harassing Heather. He had apparently attacked their Commanding Officer because he thought he was unfairly fired as well as demoted earlier. So he had broken the other guy’s arm and had gotten kicked out of the navy, but Pride had worked on Dustin. Dustin tends to respond to people through music and so Pride had used Dustin’s ear. He had asked the kid to listen to Gordon’s voice and see if he had remembered it from the night his aunt was murdered. And Dustin didn’t.

Dustin had said Gordon wasn’t at the house and so NCIS had to let Gordon go. But they had no other suspects without Gordon. He was the only guy that had any sort of known vendetta against Heather and he was proven to be violent however something Gordon said had later helped Sebastian. Sebastian had found some sort of residue on Heather that couldn’t be explained and so he had gone to Dustin’s school for the musical gifted because he had heard Gordon say that he saw Heather go there at night for no reason.

Heather though had had a reason to go to the school. Heather had gone back there because there was a construction site nearby and she had been concerned about what was exacerbating her nephew’s asthma. However, what she found was an illegal substance that many contractors use because its cheaper and so they forget that its not safe around children. So that’s why Dustin started to cough more and he was with Pride when he began to cough up blood. And so Pride had to take him to the hospital.

Yet, Pride was later reassured about Dustin’s condition. The doctors had said they had controlled his condition and the reason he had been showing signs before anyone else was because he had asthma, but the other children had also been affected as well. Their respiratory systems had been attacked and the guy that was actually paying for the construction wasn’t happy. Javier Garcia had donated a new building to the school after his son was accepted and he had thought it would be easier to use his own contracting company.

Only Javier didn’t know that his foreman was using an illegal material or that his son would have been breathing problems because of what Theo Beattie did. Though he wanted to find Theo just as much as NCIS and Gregorio had warned her friends that Javier could be dangerous. Javier was apparently working with the cartel and was using his many companies to launder money for them. So Gregorio didn’t want anyone to get on Javier’s bad side however Pride was never going to back down seeing as children had been hurt.

Pride and his team were stubborn. They wanted justice for Heather and everyone else so they continued to look for Theo even if they were getting in Javier’s way. But Theo had done something that no one expected. He had gone to the hospital and had kidnapped Dustin because he feared the kid would tell everyone that it was him though NCIS hadn’t been sure that Theo had killed Heather until they heard his ringtone and had realized that it was the same song that Dustin kept on playing with the trumpet.

So the game had already been up for Theo and Pride had been able to talk the other man down once he said that Dustin would die if he didn’t return to be treated. However, Gregorio didn’t stay on long after NCIS had finished wrapping up their case. She had been called to DC with her boss yet for a second there she had considered staying with NCIS and had only given up on that when Sebastian said that he wanted to become an agent. Gregorio it seems hadn’t wanted to come between Sebastian and a job working for Pride so that’s why she left. And who knows if the others will ever see her again.

Percy though had finally found out about LaSalle’s son and she was going need some time before she stopped feeling/being angry at him.