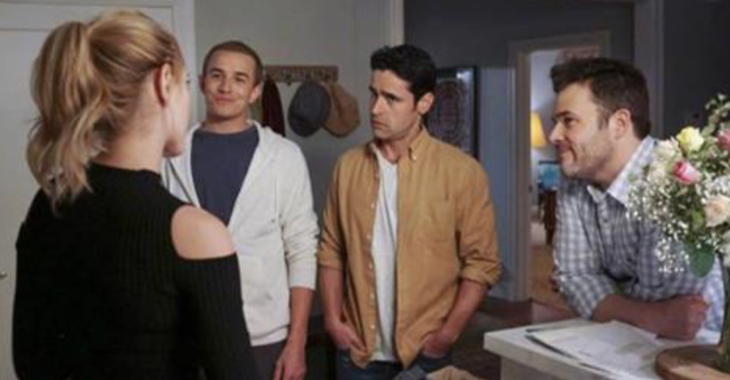 Tonight on CBS the #1 drama series NCIS with an all-new Tuesday, November 22, 2016, season 14 episode 8 and we have your NCIS recap below for you. On tonight’s NCIS season 14 episode 8 as per the CBS synopsis, “Agent Bishop (Emily Wickersham) questions her previous work at the NSA after she is sent to Gitmo to gather evidence for a Navy chaplain murder case. Meanwhile, Bishop’s brothers (Jesse Bradford and Jesse Johnson) visit for the Thanksgiving holiday and pester her co-workers to find out who she is dating.”

Bishop was dating again and she was apparently trying to keep her dating life a secret. However, Bishop hadn’t been counting on her brothers visiting her for Thanksgiving or that all three of them would be interested in who she was dating. So the NCIS agent had been caught off guard when her brothers came to town and automatically guessed that she was probably dating someone from work though she did try to stop them from embarrassing her. Bishop had told her brothers George, Rob, and John that she was seeing anyone that they knew and then she had been saved by a phone call.

Bishop had gotten called into work about a car accident involving a naval commander yet sadly there was something just a little bit off about Navy Commander Derrick Reza’s death. Reza was a chaplain in the navy, he was known as a peaceful man, and it didn’t appear as if he had any enemies. Though the time of death was what warranted further investigation. Reza it seems had died around seven that night and Ducky’s initial autopsy at the crime scene had appeared to prove that. So then why did Reza’s car go off the road at eleven? A husband and a wife were driving their baby around to get the little girl to go to sleep and they had seen the car go off the road at eleven.

Yet, Abbie’s review of the crime scene had helped clear up any misunderstanding. Abbie had found the cement block that had been used to apply pressure on the gas so that it looked like Reza was still driving, but by that, he must have already been dead. So Abbie’s findings proved that Reza had been murdered and that someone had done their best to cover up by trying to cause a crash that would burn must of the evidence. Only the evidence never got the chance to disappear and so NCIS needed to review Reza’s life. Who did he talk to, where did he visit, and most importantly why someone would go to such lengths to kill him?

So NCIS looked into Reza’s last phone call from his office and they hadn’t found anything there however, they did find out something by talking to Reza’s commanding officer. The commanding officer had told the agents that Reza often counseled men in detainment and that it created a problem for him. Mainly because some of the other soldiers had believed that Reza sympathized too much with the terrorists and so that led to many accusing him of being in cahoots with them. But Reza was a dutiful American citizen and he had no problem with men trying to ruin his country being in jail.

What Reza had a problem was the fact that some of the detainees were given their basic human rights and that some of them didn’t actually deserve to be at Guantanamo Bay. So Reza did his best to spiritual guide the men he had seen and had also attempted to help those that had been wrongfully locked up. Reza had reached out to the family of Amir Hassan and he had told them that he could help them free Amir. Amir had apparently been videotaped confessing to an attack yet Bishop and an old friend that was now firmly in the NSA had looked at the tape again and they had seen that someone had dubbed Amir’s voice.

Amir was actually denying that he had been part of any attack though the voice had admitted that he had been a mastermind and that he didn’t feel any type of guilt. So the video had been illegally doctored to keep Amir in prison for the last eleven years of his life and NCIS had every reason to believe that Reza had been killed trying to free Amir. However, the team didn’t know where to look. Reza had told Amir’s sister that their had been someone on the inside that had known the truth and was willing to help only he hadn’t given up a name. And so NCIS had tried asking Amir if he had talked to anyone else.

Yet, Amir later said that he hadn’t. Amir had unfortunately given up on talking to people seeing as no one else was going to believe him however he had talked to Derrick because he had said that Derrick was different. So NCIS had looked into who else at Gitmo could have possibly have wanted to help Amir and in time they found Brandon Peters. Brandon Peters had been the name of someone in charge of Amir’s case when he first got arrested and it turns out that Brandon who was going by Ronald Ayers now had been the one to give Amir’s file to Reza.

Brandon aka Ayers had said that he had been ordered to doctor Amir’s interrogation video and that he had reached out to Amir as a way to correct the wrong. So NCIS had figured out that they had been wrong about the motive. Someone hadn’t killed Reza to cover what happened to Amir, but that led to them looking into other motives and they eventually found out about the embezzling. Reza had apparently worked alongside Gareth Brainridge and Gareth had been looting thousands of dollars out of the organization because he had been greedy jerk.

So Reza had died after he confronted Gareth and Gareth had pushed him. The push had led to Reza’s head hitting the desk table and Gareth hadn’t bothered getting help. Though once Reza’s true killer had been arrested and Amir had been freed, Bishop had finally confessed to her relationship with someone she worked with. Bishop as it turns out was dating Qasim Naasir who was the NSA agent that helped them with this case and her brothers had been so happy to be introduced to him. They had worried that she was dating Gibbs so meeting Qasim had been relief.