Paris Hilton Looks Terrific On Luxury Yacht: Terrified of ISIS But Forges Ahead in Style 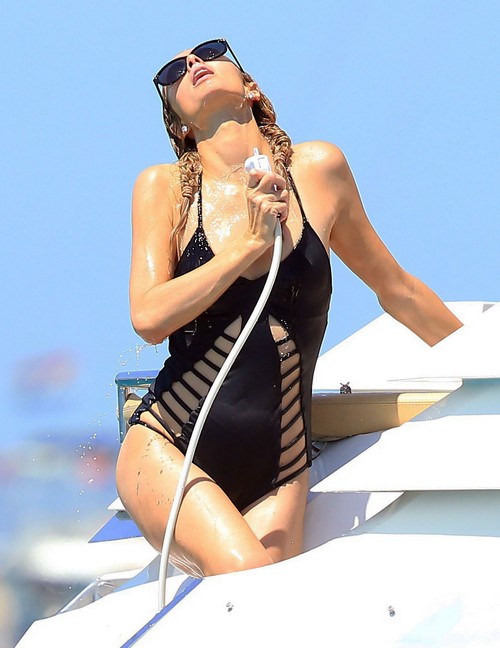 Paris Hilton is trying her best to keep her composure these days, even though she feels she might be in danger. The Hollywood socialite and busy entrepreneur was recently spotted hanging out on a luxury yacht with friends, even though she’s admitted to being completely terrified of being on an ISIS hit list.

Paris Hilton is one of the most recognizable names in the celebrity world, so it’s no wonder that the blonde beauty is worried about her safety, given all of the recent events and multiple ISIS-inspired attacks from all over the world.

Unlike her former pal Kim Kardashian, Paris Hilton still does red carpet events and promotional gigs throughout Europe, Asia and Dubai and that’s why the socialite is terrified that she might become an international target simply because of her name and her fame.

Paris explained, “I’m constantly moving around from one country to another, and I’m a famous person who could be a definite target for an attack, and that is something that sometimes terrifies me.”

And while the resent attacks in Orlando, France, and Germany are definitely on her mind, Paris Hilton managed to brush off her worries by spending a much needed vacation on the Spanish party island with her friends. The former reality television star has been spending the last week in Ibiza doing club appearances and charity events before she heads back home to the West Coast.

Paris Hilton might be scared of being the target of an international terror attack, but that hasn’t stopped her from living her life the way she wants it. In fact, the entrepreneur says that unlike other celebrities in the entertainment world, she sometimes heads out on the town without a security detail in tow.

Paris said, “I always go out alone and without security. Many celebs have 10 bodyguards but I like to go out with my friends and be normal because I want to be like everyone else. I’m not going to give up anything.”

Whatever the case, it looks like Paris Hilton is doing what she does best, and that’s enjoying her life day by day with her closest circle of friends. ISIS, meanwhile, has not responded to Paris Hilton’s terrorist comments and it’s very unlikely that they will, too.

Take a look at our gallery below and let us know what you think. Also, don’t forget to check back with CDL for all the latest updates on Paris Hilton and all of your favorite celebrities right here.

Paris Hilton is all smiles while hanging with friends on a luxury yacht in Ibiza, Spain on August 1, 2016. Image Credit: FameFlynet

Paris Hilton is spotted out and about in Formentera, Spain with friends on August 1, 2016. FameFlynet