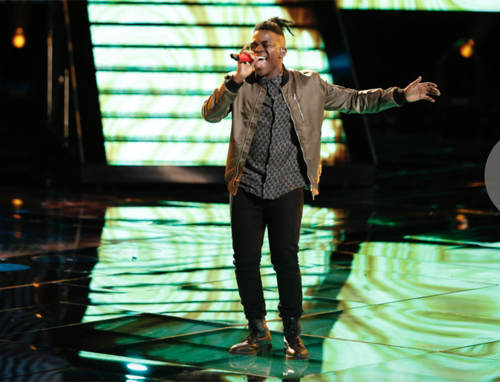 Paxton Ingram of Team Blake chose to perform live “Break Every Chain” by Tasha Cobbs this week for his Top 11 song performance.  Did you watch tonight’s show? In case you missed tonight’s show, CDL has you covered – read our full and detailed recap right here! And if you missed any of the videos – check those out right here.

On tonight’s show, the Top Eleven artists performed live for coaches Christina Aguilera, Adam Levine, Blake Shelton and Pharrell Williams for America’s votes and a chance to move to the next round. This season the competition is fierce and each of the Top 11 must sing their heart out and deliver the performances of a lifetime to win Season 10 of The Voice.

On tonight’s Top 11 episode, Paxton Ingram sang “Break Every Chain” by Tasha Cobbs as his live performance and this is the judges’ comments about his performance:

“Paxton rocks the house and Blake is on his feet clapping – as are the other coaches. It’s a four coach standing ovation and the crowd is loud with cheers.

Pharrell says dude, bro that was like an unleashing of power and says the modulation was genius to Blake’s credit and says wow. He says he was the freest he’s seen him and now American know who Paxton is and says congratulations.

Adam says he’s an amazing performer and this was the perfect song and it blew him away. He says he hates to give Blake credit but they put together an amazing situation and also gives Pharrell some props then it’s the coach’s turn.

Blake says Pharrell was great and says it was incredible and he really opened up his heart for the first time this season. Blake gives him a big hug as he leaves the stage.”