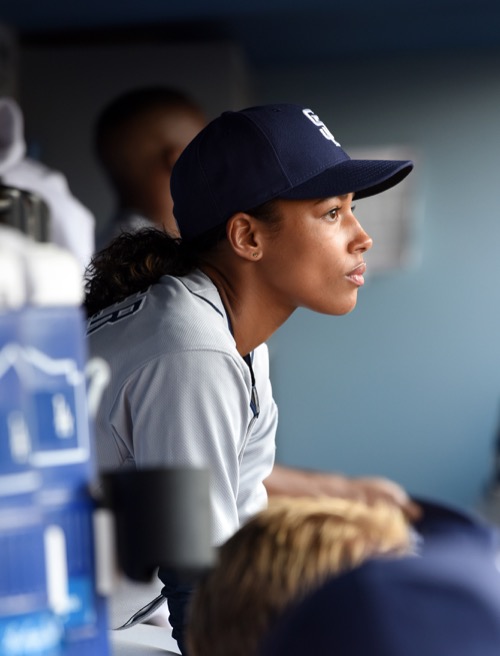 Tonight on FOX their new series Pitch premieres with an all-new Thursday, September 22, 2016, episode and we have your Pitch recap below.  On tonight’s Pitch premiere episode, a young pitcher adjusts to life in the spotlight after making history as the first woman to play Major League Baseball.

On tonight’s Pitch series premiere as per the FOX synopsis, “A beautiful, tough and gifted athlete, Ginny Baker (Kylie Bunbury) is vaulted into instant fame when she’s called up by the San Diego Padres to make her Major League debut. All eyes are on her as she is the top news story of the day, making history as the first woman to pitch… and play in the Major Leagues.”

This dramatic and inspirational new series sounds great and we will be tuning in so don’t forget to bookmark this spot and come back later for our Pitch recap.  While you wait for our recap make sure to check out all  our television recaps, spoilers, news & more, right here!

Ginny wakes up to her phone alarm. She gets ready as she looks out from above the ball field. Her room is filled with gift baskets. She makes her way out of her room with her gear as a montage of news clips report on the 23-year-old Baker, the 1st female major league pitcher.

Back to 1995, a father is trying to teach his son the game of ball. He doesn’t want to play so the daughter steps in. She has one hell of an arm.

Present day, Ginny meets the manager of the Padres. She’s getting ready to meet the team, a team full of men she knows aren’t ready to meet her. Ginny comes into a quiet clubhouse and sees a player she played with years ago. After their brief bonding moment she is shown to her locker room, a closet.

At a quick press conference, Ginny answers questions while her manager gives the Padres manager an ear full of how things are going to be.

On to her first game, the crowd is crazy and Ginny is nervous. Little girls are screaming, they want her autograph.

She’s nervous, splashing water on her face helps until she hears her male teammates from the bathroom vents calling her a gimmick.

She gets back out onto the field after throwing some practice pitches. The stands are full. They are there to see her play. Even her teammates are in awe of the crowds as she flashes back to the time her father taught her how to throw a screwball with a pile of nectarines.

Ginny gets on the mound, making history. She’s nervous and starts out by throwing high balls. Her first hitter gets to walk. Flashbacks of her youth play in her mind as she tries to gain control of her performance. She’s throwing balls and she can’t seem to get control.

Ginny answers the door to her father who wants to know what the hell happened at the game. Ginny gets upset, telling him that she’s a robot in cleats. She’s tired and she never wanted this. He doesn’t care, he makes her pitch until she’s tired.

Meanwhile, the Padres owner wants Ginny back on the mound against the protests of the manager and the rest of the team. Ginny returns to the clubhouse, head held high.

At a press conference, Mike, the team’s catcher tries to dodge all the questions he can about Ginny. Ginny and Evelyn, her friend and team mate’s wife shows up to get her head straight with some Bloody Marys. At the same time, the boys are out drinking.

Ginny is back on the field, ready to take the mound again up against the Giants with Joe Buck reporting from the sidelines.

Her first two throws are balls, but she sticks with it after Mike gives her a humorous pep talk on the mound.

She throws the perfect strike and finally finds her rhythm, throwing screwballs and getting the crowd going. With the bases loaded she strikes out the next in line. Innings pass and she finally leaves the game on a high note with the coach happy to see her take a bow.

After the game, the star pitcher who is out on injury calls Ginny a bitch. The locker room breaks out into a fight with reporters later finding out.

Back to the past, Ginny remembers the night that she was scouted by the Padres. The night her father also died in a car accident that she managed to walk away from.