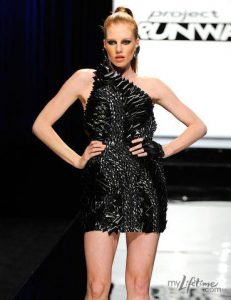 Tonight on Lifetime their Emmy Award nominated series Project Runway airs with an all-new Thursday, October 12, 2016, and we have your Project Runway recap below!  On tonight’s Project Runway season 15 episode 5 “There’s No I in Team?” actress-singer Sabrina Carpenter is the guest judge.

On the last Project Runway Season 15 episode 4, the group created swimsuits in a Heidi Klum Swimwear challenge, but a lack of swimsuit experience sorely tested some contestants. Model Lucky Blue Smith was the guest judge.

On tonight’s Project Runway episode as per the Lifetime synopsis, “Business savvy is tested in Season 15’s first team challenge. Here, the designers must pitch collection ideas to raise money from a group of mystery investors. Actress-singer Sabrina Carpenter is the guest judge.”

Tonight’s episode of Project Runway kicks off with Tim Gunn greeting the remaining designers. He has brought along a consultant from Mary Kay and announces this week is not only the Mary Kay challenge, but also a team challenge. This week, they will be working in two teams of 6 and each team will be putting together a collection of four looks. There is also another twist – each team will have to pitch their designs to a group of mystery investors. The investors will decide how much money each team will get to spend on fabric on mood.

It’s time for the designers to divide in to teams. Alex and Brick are team captains. Alex chooses Greg, Roberi, Laurence, Mah-Jing, and Cornelius. Brick chooses Tasha, Laurence, Erin, Dexter, and. The teams divide up and sit down and start planning their designs to pitch to the investors.

When it’s time for the teams to pitch their ideas, Alex leads his team and explains that they are putting together a fashion line to empower women. Dexter represents his team and he pitches their plan, a female clothing line with a tech twist. Alex clearly knows what he is talking about and this isn’t his first pitch. The “investors” announce that they are investing $2200 in to Brick’s team, and only $800 in to Alex’s team.

After the pitches, Alex’s team isn’t too impressed with their leader after his pitch fell short and the investors thought that it was boring. The two teams head to Mood with their money to pick out the fabrics that they will be using. Mah-Jing is having a tough time with his teammates, no one is listening to him or taking his opinion seriously.

Everyone heads back to the workroom to get started on their designs. Tim Gunn arrives for critiques. He doesn’t seem too impressed with Alex’s team’s color choices of fabric. Interestingly enough – that’s what Mah-Jing was trying to tell them at the fabric store and no one would listen to him.

Tim Gunn check in with Brik’s team – Laurence is working on a leather jacket. Jenny and Erin are putting together a tan and yellow outfit. Their outfits are certainly more colorful than the other team’s. Tim Gunn warns them that their collection doesn’t seem too cohesive.
After Tim leaves, the models arrive so that they can be fitted. Brick’s team is in trouble – they have literally nothing for the models to try on, they are seriously struggling to make the corrections that Tim recommended. The only thing that is done is Laurence’s jacket. Tim Gunn interrupts and tells them that it is time to turn in for the night. They will have a few hours in the morning to finish up their projects. Brick’s team is freaking out – they are cutting it very close.

In the morning, the workroom is complete chaos. Alex’s team is confident, they think they have this contest in the bag. Meanwhile, Brik’s team is a hot mess – and they are still running out of the sewing room as they are called to the runway. The models parade down the runway in the designs the teams created, and the judges check them out, including guest judge Sabrina Carpenter.

After the runway show, Heidi explains that there will be a winning team and a losing team. One member of the winning tea will be crowned the winner of the contest and a member of the losing team will be sent home. The judges announce that Brik’s team is the winning team – and each of them will receive $5,000. That means Alex’s team is the losing team and one of them will be sent home. The judges meet with Brik’s team first – they love Laurence’s jacket and Erin’s yellow coat.

After meeting with the teams and learning who did what, the judges spend some time deciding who is the winner of the competition and who should be sent home.

The designers are called back to the runway. Heidi Klum announces that this week’s winner is Dexter. Now it is time to learn who will be eliminated – Heidi announces that the member of the losing team that is going home tonight is … Alex.