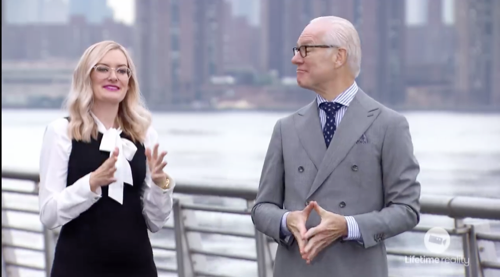 Tonight on Lifetime their Emmy Award nominated series Project Runway airs with an all-new Thursday, September 22, 2016, and we have your Project Runway recap below!  On tonight’s Project Runway season 15 episode 2 “Just Fabulous!” , outfits that flatter all body types are created by the designers.

On the last episode of Project Runway we met the 16 new designers who were at a premiere party. The designers were told their first challenge was starting and they had to use the party supplies to make an unconventional dress.  The winner of the challenge was Erin Robertson and the designer sent home was Ian Hargrove.

On tonight’s Project Runway episode as per the Lifetime synopsis, “The designers meet their clients the everyday women in NYC.  They are asked to create a look that benefits women of any shape, size, and age.  Of course, they have to make them look fabulous.”

Tonight’s episode of Project Runway kicks off with the designers getting briefed on their next competition. They meet Tim Gunn, and a rep from the website “Just Fab.” Just Fab specializes in dressing the “everyday woman” – all ages, sizes, from all walks of life. The winning designer of this competition will have their outfit sold on the website Just Fab.

The designers get to work on their designs and begin sketching, Linda is feeling inspired by the New York City architecture. They get an hour to sketch, and then it is time to head to Mood. Each designer is given a budget of $150 to buy fabric of their choice. They begin rushing around frantically searching for the colors and textures that they will need.

Tim Gunn takes the designers back to the work room with their fabric. They have until 1:00 AM to finish their projects and the runway show will be tomorrow. There’s already some drama brewing in the sewing room. Cornelius seems to have a problem getting along with everyone, and can’t stop talking badly about other people’s designs. The designers who aren’t bickering with Cornelius, are busy laughing at Jenny – she laughs like a hacksaw. Laurence hurt her ankle the night before, but she is on the mend and busy at work.

After a few hours, Tim Gunn arrives for critiques. He stops at Alex Snyder’s table first – he’s working on a pair of slacks, a blazer, and a camisole underneath. Alex is a perfectionist, and Tim gives him a few pointers on getting done with his design in time.

Erin’s critique doesn’t go too well, she’s adding sequins to her dress, which Tim thinks is a bit foolish.

Tasha is working on a simple design and a basic skirt, but Tim thinks that she should spice it up a little bit. Meanwhile, Jenni’s outfit might be a bit too spicy, she’s not sure how the judges are going to perceive her drop-crotch pants.

Laurence is working on a gym suit, and it also has drop-crotch pants. But, Tim is not a fan of her design. He warns her that they are supposed to be designing clothes for everyday women, not stick thin model type women. Laurence’s design is cute, but it is not going to be flattering on a larger woman.

Brick was on the bottom last week, but he’s determined to make a comeback with his Just Fab design. He has a simple pants set with a wild design on them, and then a crop jacket. Tim Gunn warns him that the jacket is “way too Blade Runner.”

Nathalia gets on of the worst critiques from Tim Gunn. He warns her that her design is a little over the top, and her outfit is starting to look like a cartoon.

Tim seems pleased with Kimber’s design, but that is all she has so far is a design. She’s running a bit behind and hasn’t even started cutting her fabric yet.
A few hours later the models arrive to be fitted. Kimber still doesn’t have anything done for her model to try on.

At 1:00 AM Tim arrives and tells the designers it is time to call it a night and head to bed. Sarah is in full blown panic mode because she just discovered that her skirt has a hole in it. Meanwhile, Kimber finally finished her top – only to discover that she sewed it wrong side out.

The next morning the designers head back to the sewing room. They have two hours to put the finishing touches on their designs, fit their models, and take their models to the beauty studio to get their hair and make-up done for the runway show.

Tim Gunn pops up and tells them that the runway show kicks off in 10 minutes, while some designers are completely done and their outfits look amazing, others are struggling, like Brick and Kimber. This is certainly going to be an interesting runway show.

The designers head down to the runway for the fashion show. Heidi Klum takes the stage and introduces the judges – Zac Posen, Nina Garcia, and guest star Nina Dobrev, from The Vampire Diaries. It’s an anonymous fashion show, so the judges will not know which design that they are judging belongs to which designer. The lights dim and the models hit the runway, rocking the Just Fab designs.

After the show, it’s time for the judges’ critiques to start rolling in. Heidi announces that Erin, Kimber, Alex, Laurence, Linda, and Brick are in danger tonight. The rest of the designers are safe tonight. Heidi reveals that out of the six designers she just called out – one of them is the winner, and one of them is the loser and will be going home tonight.

Heidi is a fan of Alex’s look. She says that it “looked really polished from head to toe.” Nina agrees, she is a huge fan of the bow and the pants that he designed. Zac adds that it’s “very Upper East Side,” however he is growing a little tired of seeing oversized bows.

The judges aren’t too impressed with Kimber’s top. However, Nina jumps to Kimber’s defense, she thinks that the design on the crop top “makes it pop.”

Laurene’s jumpsuit is a hit with the judges. Heidi jokes that she could even see her 73-year-old mother wearing it.

Linda was going for an urban kimono look, with a grey knit sweater dress underneath it. Nina rips her design to shred, she says it looks “really shabby.” Zac Posen agrees and says that they should burn the jacket. They are equally harsh on Brick’s design. Nina says that it feels like it is “Business on the top and couch party on the bottom.” Nina adds that it is very bland and doesn’t have any personality.

The judges sit down to discuss the designs, and then it’s time to reveal this week’s winner and loser. Heidi calls the designers back to the runway for eliminations. Laurence is crowned the winner of today’s challenge.

Laurence is crowned the winner of today’s challenge.

And, Linda is officially eliminated from Project Runway.