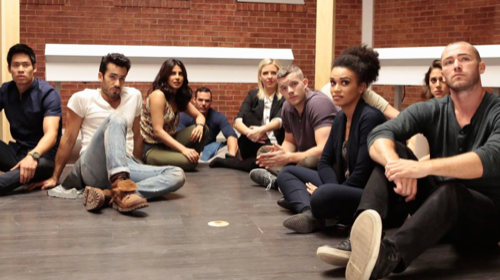 Tonight on ABC their hit drama Quantico airs with an all-new Sunday, October 16, 2016, season 2 episode 4 and we have your Quantico recap below. On tonight’s Quantico, Season 2 episode 4 the trainees have their stress levels tested while Alex (Priyanka Chopra) attempts to get close to Owen. (Blair Underwood)

Did you watch the last Quantico episode where the new CIA recruits continued training at The Farm focusing on assessment, while in the future, Alex (Priyanka Chopra) went undercover to infiltrate the terrorist group holding everyone hostage where she was shocked to discover not everyone was a stranger? If you missed it we have a full and detailed Quantico recap, right here for you.

On tonight’s episode as per the ABC synopsis, “The trainees are put through a training drill that tests their stress levels while Alex (Priyanka Chopra) tries to gather information and get close to Owen. (Blair Underwood)  Meanwhile, in the future, the terrorist organization demands a trade, a move that could possibly end the stand-off.”

Tonight’s episode of Quantico kicks off in the basement, the terrorists have taken the hostages downstairs. The guards are still searching the building for Alex. Rayna is moved in to a room alone, Alex watches from around the corner.

Meanwhile at their office across town, Shelby is briefing everyone on the rogue CIA agents and her report – she is certain that the group that Ryan and Alex were trying to infiltrate is responsible.
The terrorist go live and stream another video with Rayna speaking on their behalf. They are willing to release 1600 of their prisoners – in exchange for the criminal hacker Eric Boyer.

Flashback – Miranda is furious about the bug that they found in Alex’s room. She wants to pull Alex and Ryan out of the training camp before they are discovered and possibly killed by the anarchists. Back at the students’ house – Ryan gets a mysterious package that he has to sign for, it’s from the Department of justice, and a key.

Alex and Ryan head to class – Owen lectures the about emotions, and learning to control them and hide signs of stress. The students put on plastic bracelets that measure their stress. Owen promises to teach them to conquer fear.

Present Time – Alex slips in to the room where Rayna is being held. She gets a chance to talk to her, they exchange intel. Alex tells Rayna that she can’t let the terrorists trade the hostages for Eric Boyer. Whatever they want the hacker for can’t be good, and is the next part of their plan. Rayna seems to disagree, she argues that the trade could save over 1600 people.

Meanwhile, back at the office, Miranda and Shelby are arguing over whether or not to make the trade with the terrorists. Shelby thinks it’s a horrible idea, the terrorists are obviously steps ahead of them, and who knows what they want Boyer for. Interestingly, Miranda is all for giving the terrorists Boyer and making the trade – she heads out to find Boyer and convince him to come in and let them trade him to terrorists.

Miranda and Shelby track down Eric and arrest him for jaywalking. Miranda takes Eric aside and tells him that he didn’t “hold up his end of the bargain” and now he is going to have to turn himself over the anarchist group. It’s starting to sound like Miranda might be working with the terrorist CIA group.

In the basement, Rayna is sat down next to Lydia. She whispers to her that Alex is still alive and she talked to her. She wants Lydia to help her make sure that the terrorists don’t make the Eric Boyer trade. Lydia refuses to help, she points out how many times Alex has screwed up in the past, and they need to make sure the trade goes through and they can save as many people as possible.

Flashback – the students are all wearing their stress watches, Owen takes them all to a Lingley mixer to meet with all of the head honchos at the CIA. Owen is monitoring all of their stress on their bracelets to see who can handle it. Alex is trying to clone Owen’s phone so that she can use the APP he is looking at to spy on her classmates and their stress levels.

Present Time – It’s time for Miranda and the FBI to trade Eric Boyer for the hostages. Alex watches from the roof, and realizes that Rayna is not following their plan and is letting the trade go through. She starts shooting gun shots in to the air and chaos ensues. Alex watches as Miranda follows through and makes sure Eric Boyer gets to the terrorists. On the bright side, all 1600 hostages that they were letting go, make it to safety.

Flashback – Alex is ruffling Owen’s feathers at the party and following him around, still trying to clone his phone. She gets upset because Ryan won’t help her with her crazy plan, and he leaves the party early. Ryan heads to a safety deposit box with the key that he got in the mail. There’s a baseball cap inside the box, it says “CIA” on it. And, a handwritten note that says, “Hope it fits.”

After the party, Owen lectures them about their stress tests. Every student in the class has one stressor, and it’s their greatest weakness. He tells the students that they need to learn their weaknesses and embrace them so that they can’t be used against them by their enemies. The classmates head back home and realize that they were played by Owen and Lydia…again. They figured out their weaknesses, and used them to drive up their stress levels.

Ryan knocks on Lydia’s door in the middle of the night. He confronts her about sending him the hat and pretending that it came from Liam to stress him out.

Alex stays late after class, she is still trying to clone Owen’s phone. He rushes off again – but luckily she was able to finish the download. Now, she has access to Owen’s phone, and all of his data on all of her classmates.

Present – Miranda orders her people to interview all of the hostages that were just released, and then let them go. Shelby scoffs that some of those people could be the terrorists, they can’t just let them go.
Shelby heads back to her office, she finds a strange email on her computer from Eric Boyer. She opens the email and reads it and then slams her computer shut.

Meanwhile, the terrorists have Eric Boyer at a computer – he says that this has gone too far, and jumps up and attacks a guard. He’s shot and killed.