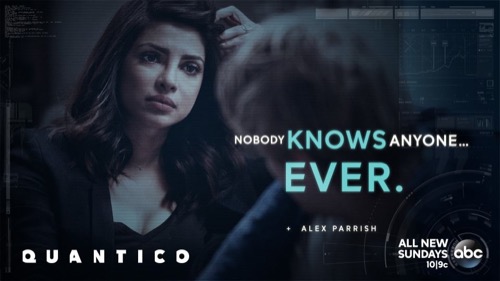 Tonight on ABC Quantico airs with an all new Sunday April 24, season 1 episode 19 called, “Fast” and we have your weekly recap below. On tonight’s episode, on career day at Quantico, the NATS meet with representatives from the various FBI branches.

On the last episode, at Quantico, Alex, Shelby and Iris learned some surprising truths about Drew, Will and Caleb while investigating them for high-level security clearances. Did you watch the last episode? If you missed it we have a full and detailed recap, right here for you.

On tonight’s episode as per the ABC synopsis, “on career day at Quantico, the NATS meet with representatives from the various FBI branches. Meanwhile, in the future, Alex’s search for the terrorist brings her into contact with some familiar faces, including one who knows the terrorist’s endgame.”

Tonight’s season 1 episode 19 looks like it is going to be awesome so make sure that you tune in to our live coverage of Quantico at 10:00 PM EST!

Tonight’s episode of Quantico kicks off Caleb handcuffed to a radiator in the bathroom – he is going through serious withdrawals, and Alex is helping him get sober. Alex sits down with Caleb, she says there is still no word from “The Voice” of Shelby, Will, and Simon. Alex has to go to work, Caleb begs her to stay with him, but she doesn’t want to be a no show and put up any red flags. After Alex leaves, Caleb calls someone and tells them that she is gone.

Flashback to Quantico – everyone is buzzing about Will being jumped. He lied and said that someone attacked him while he was going on a jog. Shelby is furious – she marches in to Liam’s office and tells him that Will lied, Caleb is the one that beat him up. Liam tells Shelby to drop it, Caleb left for a family emergency. Shelby argues that Caleb is a danger to all of them, but Liam won’t listen.

Everyone heads to class, Liam announces that it is Quantico’s version of career day. They have reps come in from all of the departments, to meet with the trainees to discuss their assignments after Quantico. Ryan takes Alex aside, word is that someone has a medical condition and he wants to know who it is. Alex refuses to be a snitch though, and she won’t give up Perales’ name. Ryan leaves, and he bumps in to Natalie’s mom – she came looking for her daughter, she hasn’t heard from her in over a week.

Present – . Ryan leaves the office, and he bumps in to Natalie’s mom – she came looking for her daughter, she hasn’t heard from her in over a week. Alex arrives at work, Caleb calls her on her cell, he is still trying to get her to come back to the apartment. Alex hangs up on him when she spots Shelby sitting in Miranda’s office. Miranda explains that they are upgrading the security system, and Shelby is helping them.

Ryan takes Nimah aside and tells her that there is a problem – Natalie is missing. Nimah thinks he may be overreacting. Ryan already checked her credit cards and cell phone, Natalie hasn’t surfaced in over a week, there is no trace of her – her other was right, something is definitely wrong.

Flashback to Quantico – after their meetings with reps from the agencies, everyone recieves envelopes with the names of the departments that are interested in them. Alex and Perales both receive green envelopes, which means that an “elite” department is interested in them and they will have to undergo tests to see if they make the cut. Alex is obviously worried about Perales and his possible medical issue.

Present – Alex is freaking out, she just found out that Shelby was working with ‘The Voice” and now she has brought her private company in to upgrade the FBI’s servers. There is no telling what kind of information Shelby is accessing while she is in the FBI’s servers. Alex takes Miranda aside and tells her that Shelby lied – her parents are still alive – and they were selling weapons to the Taliban before 9/11. Miranda shouts at everyone on the computers to stop what they are doing.

Miranda takes Shelby aside, Shelby insists that her business means too much to her for her to sabotage the FBI. She tells Miranda she wants to talk to Alex and confront her about what she said. Alex sits down with Shelby, they banter back and forth. While they are arguing, Shelby taps out a message with morse code and the arm of her chair and Alex writes it down. Shelby says, “I’m on your side.”

Flashback to Quantico – Shelby calls Caleb’s dad and leaves him a voicemail telling him that Caleb is back in the cult. Then, she heads to the Systemics Headquarters, after she gives them a huge check as a donation to their organization, they let her meet the headmaster. Shelby is seated in the waiting area right next to Caleb.

Afterwards, Alex freaks out on him. Drew insists that it is just stress, Alex tells him he needs to tell the FBI what is going on with him. When she gets back to Quantico, Alex stops by Ryan’s office and tells him that Drew is the one that is hiding a medical condition.

At Systemics, Caleb tells Shelby that he is undercover. She needs to leave ASAP, before she blows his cover. Shelby leaves…reluctantly. Caleb sits down with the master, he learns that his friend Ross (the one he is trying to get out of the cult) was “sent down to the lodge for rehabilitation.”

Present – Alex meets up with Shelby in the secret stair case. Shelby tells her that “The Voice” called her and told her to pick up Will and Simon and drop them off at a warehouse – the caller threatened to kill Caleb if she didn’t. Shelby says that she is the one that Caleb has been calling, he was trying to keep her home form work so she didn’t interfere with her mission. Shelby used her company’s software to trace the calls, and it is coming from the FBI. That’s why she took the job – she is getting in to the servers to try and trace the calls…and Alex nearly blew her cover.

Ryan and Nimah head to Miranda’s office. They tell her that Natalie is missing – and the last person that saw her alive was Alex. She helped Natalie bypass security, and she hasn’t been seen since. Miranda is not happy, she tells Ryan and Nimah to find her now.

Flashback to Quantico – Caleb meets with his dad, he recorded his entire time conversation with Master Berlin. His dad is proud of him, and tells him that is exactly what they needed. He has bad news though, Caleb’s friend Ross is dead, apparently he committed suicide. Caleb is even more upset when he learns that Berlin isn’t even going to jail – he cut a deal.

Present – Alex and Shelby head back to her apartment to check on Caleb. Meanwhile, they are waiting for “The Voice” to log in to the FBI server. “The Voice” calls Shelby and threatens her for being at the FBI office, she insists that she was just doing her job. The caller threatens to kill her if he finds out she was doing otherwise. After she hangs up, Shelby and Alex are able to trace the call and they get an address.

Flashback to Quantico – Drew is furious at Alex for throwing him under the bus because of his medical condition. Ryan has ordered him to go visit the FBI doctors and get tests done. He screams at her that she cost him his career. Drew drops out of Quantico and refuses to see

Caleb’s dad meets with Shelby. He lies and says that Caleb wasn’t working undercover, instead he got sucked back in to the cult, apparently it is supposed to be a secret that Caleb and Will were under cover. Mr. Haas apologizes for her missing career day and invites her to come work at his office after graduation.

Present – tonight’s episode ends with Alex and Shelby rushing to the address they traced the phone call from, it’s a church. They find Will inside. He’s frantic and sick – he tells them not to come any closer to them. Will confesses that he helped build a nuclear bomb with his own hands. He tells Alex “You have to find out” before he drops to the floor, lifeless.