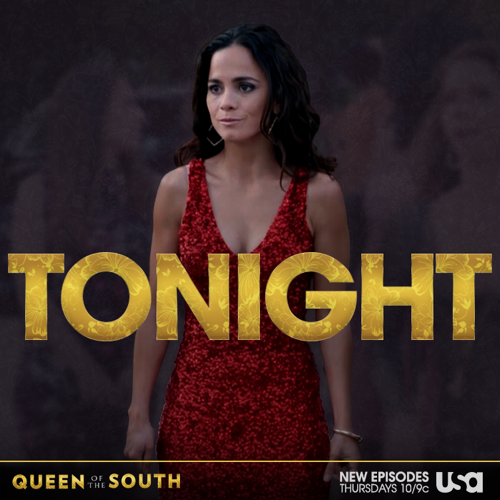 Queen of the South airs on the USA network tonight with an all new Thursday, July 21, season 1 episode 5 called, “Un Alma. Un Mapa. Dos Futuros,” and we’ve got your Queen of the South recap down below! On this evening’s episode, Teresa (Alice Braga) advances her plans after witnessing a horrific incident.

On the last episode, Teresa’s first solo drug run didn’t go as planned; and Brenda and Tony escaped to Dallas. Did you watch the last episode? We’ve got your detailed Queen of the South recap right here.

On tonight’s episode per the USA synopsis “Teresa advances her plans after witnessing a horrific incident; and Brenda, who’s safely in Dallas, begins assembling a team to help her sell drugs.”

Tonight’s episode of “Queen of the South” begins with Teresa taking Brenda and Tony to a motel. Teresa breaks the news to Brenda that she is working for Camila. Outraged, Brenda argues with Teresa that working for Camila is dangerous. Teresa reassures Brenda that with Epifanio already wanting them dead, having Camila on their side is their best chance at survival. Back at Camila’s warehouse, James tells Teresa that they are going to go kill someone.

Epifanio and Cesar meet to discuss what Camila knows. Epifanio decides that it is best not to tell Camila why Teresa and Brenda are so important or that they know she is working with the Colombians. Cesar tells Epifanio that Camila’s business is three times larger than what they thought and that they need to put a stop to her business now before it is too late. Epifanio explains that they must act as if Camila already knows about the book and is keeping Teresa alive for that reason. He decides that the best way to handle the situation is to cut off her drug supply. Cesar calls the delivery drivers and tells them to stop delivery of the drugs.

Teresa and James are on their way to kill someone. Teresa objects saying she does not want to be involved in a murder. They go into James’s apartment where his girlfriend finds Teresa a dress to wear. Meanwhile, James grabs some weapons. He questions his girlfriend about her plans for later after seeing a suspicious text message. She assures him she isn’t seeing other men and James and Teresa leave with the weapons and dress.

The two go to a large party where a woman named Gloria escorts Teresa inside. James hands her a device and tells her to take it inside and wait for him to call her. He tells her to stay away from the host of the party, Eric. At the motel, Brenda is running low on money. She approaches a drug dealer and gives him lessons on selling his product. She recruits him to sell for her.

Back at the party, Teresa mingles while outside James sets up surveillance equipment.

Camila unsuccessfully tries to contact her daughter. Camila’s men call to tell her that the drug deliveries did not arrive. She calls Epifanio who says that the Feds are preventing her shipments. Camila confides to Epifanio that their daughter is avoiding her: Epifanio tells her to come back home so they can be a family again. Meanwhile, James texts Teresa and tells her to go to the master bedroom of the house that the party is in.

Brenda takes the drug dealer to a nicer part of town and goes inside a bar. She approaches a man and tells him that, in order to pick up women, he should buy some cocaine. At the house party, Teresa enters the master bedroom and James tells her to turn on the device and hide it inside a floor vent. As she gets ready to leave, a group of men enter the room, forcing her to hide. As James watches from outside, the man who is tied up sees Teresa and tells her to leave the room. Instead, she tries to untie the man until he insists that she leaves before she gets caught. James uses the device to start a fire in the bedroom and, when the host goes to check on the situation, he takes a photo of him then tells Teresa to get out of the house.

Brenda returns to the car, having sold all of the dealer’s stash. Teresa leaves the party and James tells her that, although he is going to kill the host, it won’t be today. He explains that Camila only runs half of Dallas and that the host is representing a cartel that holds the other half for shipping purposes. He tells Teresa that his master plan is to get partial control of Camila’s business. As they watch, the host suffocates the man that is tied up in the bedroom. James explains that there was nothing they could do to help the man and that, since she is now working for Camila, this violence is a part of her world now.

Camila calls Reynaldo to ask for an expedited shipment. He tells her that there is one already on the way that should reach her in 48 hours. She tells him to get it to her in 24 hours instead. James and Teresa return to the warehouse and Teresa tells James to leave her out of his next job. He tells her that it is important that she learn. Brenda counts money in her motel. Teresa calls Brenda and leaves a voicemail saying that she needs out of this situation.

Camila then asks to see her. She tells Teresa that she understands how upset she must be after all the violence she has seen. She also tells her that if she runs away, she will be killed. Camila tells her that she thinks Teresa has promise and to not be afraid of Epifanio. Epifanio calls Reynaldo and tells him to stop supplying drugs to Camila because he has something bad planned for her that Reynaldo will not want to be part of.