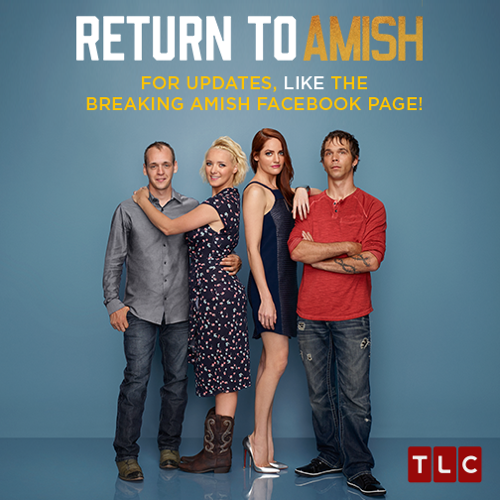 Tonight on TLC Return to Amish, the Breaking Amish spin-off airs with an all new Sunday, July 17 season 3 episode 2 called “Banished,” and we have your weekly Return to Amish recap below. On tonight’s episode, the gang takes a road trip to surprise Kate in New York City and walk down memory lane.

On the last episode, in recovery, Sabrina, Mary, Jeremiah, Abe, and Rebecca visit Kate in New York City. Did you watch the last episode? If you missed it, we have a full and detailed Return to Amish recap right here for you.

On tonight’s episode as per the TLC synopsis, “the gang takes a road trip to surprise Kate in New York City and walk down memory lane; Sabrina learns about Jeremiah’s long-distance relationship; Mary secretly calls for help from home.”

Mary was trying to start a new life in Lancaster on tonight’s episode of “Return to Amish” so she decided to introduce herself to the Amish community there by hosting a Tupperware party.

Mary has only been in Tupperware for a short time so she was still a beginner at those type of parties however she wanted to break into a new community and she also knew that she was going to need a way to support herself. So selling Tupperware was a great idea for someone like Mary. It allowed her to move in both the English and the Amish world. And it also didn’t hurt that it helped get Mary’s mind off of her husband.

Mary had left Chester back in Punxsutawney because he hadn’t been banished and he wanted to stay around for their grandkids. So being out in Lancaster alone was the first time that Mary has or will ever act without there being a chance that it could somehow affect Chester or he’s viewed in the community. But with that mind, Mary decided that she was up for another trip to New York. The last time she had been to the city it had been with her daughter and together they had been worried about getting the silent treatment back home.

And yet Mary knew even before she left that this latest trip was going to be vastly different. Sabrina had invited her and the rest of the original tribe to come with her to New York because she had been invited by a professor at NYU to come in and talk about growing up Mennonite. Yet, Sabrina had also wanted to see Kate while she was there so the trip was a way for all of them to relive the early days when they all met each other and became friends if not family. So everyone had thought it was a wonderful idea until they realized they couldn’t all stay in Kate’s tiny New York apartment for as long as they were planning.

Mind you no had even told Kate that they were all coming together so she had been pretty shocked when five people showed up at her door instead of it just being Sabrina. However, the real shocker came when they said they were in town for three weeks and were all going to be staying with her in her one-bedroom apartment. So Kate had tried to adjust to that although Jeremiah thought it was pretty funny that she was secretly freaking out. And on their first night there, they all ended up enjoying themselves when Sabrina turned the water on while Jeremiah was trying to sleep in the bathtub.

But things were different by the next morning because that’s when Jeremiah fell back into some of his old patterns. Jeremiah had apparently gotten angry at Kate even when she wasn’t at the apartment because he felt that she was ashamed to be around them or reminded that she had grown up Amish. So again he had an issue with her although all she did was go to work which left the rest of them to figure out their own days. And the one time she did hung out with one of them, she had taken Sabrina to dinner because they hadn’t spoken in a while.

Kate for instance hadn’t known how bad it had gotten for Sabrina. So she had actually felt bad that Sabrina was going through so much and had wanted to make it up to her by being a better friend now. Yet, Kate had kind of shut down on Sabrina when Sabrina asked her about a certain rumor. Sabrina had seemingly heard that Kate was dating a plastic surgeon so she had asked Kate if that were true and Kate had surprisingly overreacted. Kate had said that she doesn’t have a boyfriend and then had been moved to tears when the producers had also tried to ask her about it.

So something was off about that and for some reason Kate refused to talk about it at all. Like she would genuinely shit down the entire conversation if this rumored boyfriend was mentioned and that went for her coworkers as well. The ladies that worked with Kate at the fashion house she was interning with had asked her one day if she had a boyfriend and Kate had told them no. Though later they ended up finding a guy that looked like he was dating her on social media.

And so it didn’t make sense why Kate was refusing to even discuss the rumors, but she was and later Mary had asked just Kate to accompany her on a trip because she knew that Kate could keep a secret better than the rest of them. So that was kind of funny. Although, there was a downside to Mary’s secret because it seems Mary knew beforehand that keeping quiet about Esther coming to town would backfired on pretty much everyone.

Mary had apparently wanted to go to Grand Central because she knew her daughter was coming into town. But Mary also knew that her youngest daughter Esther was going to be quite a shock for Abe and Rebecca. So she kept quiet until they couldn’t do anything about it much less stop it. And now Rebecca was just going to have to deal with Esther though no one knows what the problem was or why they seemingly didn’t like each other.