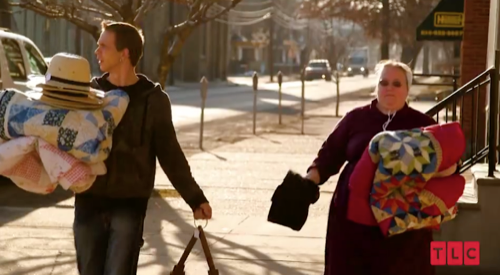 Tonight on TLC Return to Amish, the Breaking Amish spin-off airs with an all new Sunday, August 14 season 3 episode 6 called “Rebels Without a Claus,” and we have your weekly Return to Amish recap below. On tonight’s episode, an Old Christmas celebration brings the cast back to Pennsylvania.

On the last episode, Mary made an Amish meal as an attempt to bring peace and togetherness to the group. Meanwhile, Jeremiah hung out with his kids in New York City. Did you watch the last episode? If you missed it, we have a full and detailed Return to Amish recap right here for you.

On tonight’s episode as per the TLC synopsis “An Old Christmas celebration brings the cast back to Pennsylvania. Meanwhile, Kate gets bad news about her internship; and dinner is interrupted by a confrontation between Jeremiah and Kate.”

There’s been a lot of tension this latest time around in New York. So Mary finally decided to call it quits on tonight’s episode of “Return to Amish” and just go back home. Mary had originally wanted to come to New York to take her mind off of her troubles and have a fun time with the kids again however they’ve been fighting nonstop since they all got together and its not like they could have stayed with Kate forever. Especially as Kate has been trying to make a name for herself in New York and kind of didn’t need all the distractions.

Kate nearly had an anxiety attack last week because of all the fighting and she kindly reminded everyone that she had a lot on her plate. Like her internship for instance. Kate was trying to keep up at her highly competitive internship and she was also going to school at the same time. So when she wasn’t studying for her exams, Kate was trying to make herself memorable at work and hopefully leave a good impression. But what Kate didn’t need nor want was to find herself in the middle of someone’s else fight.

Kate hadn’t been the one that got into Sabrina’s face or dumped on Esther just because she could. That had actually been Abe and Rebecca! So everyone had gotten pretty fed up with the drama and Mary knew that they all needed to go their separate ways for a while. To give Kate back her apartment if nothing else However, Jeremiah simply could not leave Kate out of it. He seemed to have a problem with the way she avoided home and was always at work or studying because of school so he later complained that he thought that Kate was ashamed of them all.

That was something he said in New York and repeated when they were all back in Lancaster. Jeremiah believed that Kate was ashamed of her Amish past. So he thought that she was trying to write them all off and avoid them as much as possible. Yet, because its Jeremiah, he didn’t ask to discuss these concerns with Kate or even bother to try and talk her alone because he preferred to confront her at Mary’s Christmas celebration. The Amish celebrate Christmas in January so Mary had invited all the kids to come to her house to celebrate Old Christmas together. And Jeremiah felt that was the perfect place to unload all of his resentment.

So things didn’t get better for everyone back in Lancaster. Surprisingly, it got worse and frankly that had been Jeremiah’s fault. Jeremiah had voiced certain things in the past about Kate’s behavior and all of the things he allegedly can’t stand about her. But being in New York, albeit at her place for the majority of it, he became a lot more vocal about Kate’s supposed behavior and felt that it was his place to call her out as some type of phony. The strange is, though, Kate had no idea where he was coming from because she was showing up at Old Christmas and she had offered to be there for them in past.

Kate had also apologized to Sabrina while they were in New York because she hadn’t known how bad things had gotten for Sabrina. So she apologized for not being there enough to support her as she worked through her drug addiction. However, despite what she had done and showing up, Jeremiah went for her after their gift exchange. Everyone had been excited to get gifts as well as anxious because they hoped the gifts they were handing out were good yet Jeremiah’s chief concern was getting under Kate’s skin.

Jeremiah had started in with the little snide comments like he usually does. So that again caused tension right after everyone had exchanged gifts and were in a great place. Yet, Jeremiah just couldn’t stop while he was ahead so that eventually demanded a confrontation. Kate had wanted to know what Jeremiah’s problem was and Jeremiah began with his list. He said that Kate had come down on all of them earlier because they had dared to say something bad about the Amish, but that she was the one that was most ashamed of where she came from.

Jeremiah mentioned that she had dropped people before and that she doesn’t really give f*** about anyone. So he asked her why should he even sit at the same table as her. Though something he also said was very telling. Jeremiah said that everyone there tonight was life because they were the only family he could count on. And that’s why he’s remained in contact however Jeremiah’s real problem with Kate is that she doesn’t think he or anyone else could count on her to show up when they’re in trouble.

So did Jeremiah really have a problem with Kate or was his outburst his way of saying he missed her?