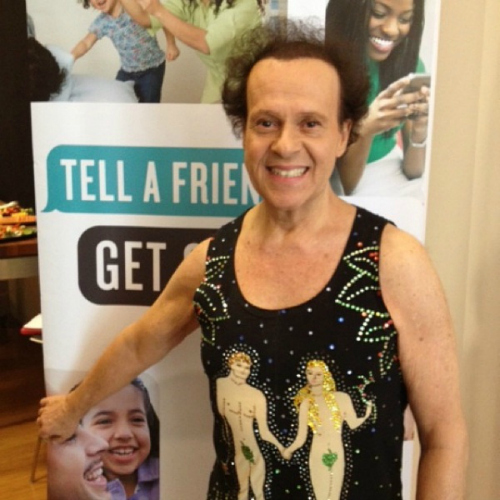 The strange story of Richard Simmons took a new turn Friday night when the health guru was rushed to the hospital after a 911 call to his gated Hollywood Hills mansion. TMZ reported that paramedics recommended that Simmons be taken to the hospital and he consented.

Richard Simmons was taken to Cedars-Sinai, the health refuge of the rich and famous, but it’s not clear if he’s still at the hospital. The 911 call reported strange behavior but is this a medical or psychiatric crisis? And if Simmons is still at the upscale medical establishment, who is tweeting on his official account?

There have been about six posts a day on Simmons’ Facebook and Twitter feeds, mostly shared links, but also some commentary on the infamous gorilla shooting at the Cincinnati Zoo. Simmons’ social media accounts show activity through 11 pm on Friday and resuming mid-day on Saturday.

For the past three years, Richard Simmons has practically disappeared from public life, aside from social media activity that my be managed for him. The New York Daily News reported in March that the fitness fanatic was “gaunt” and being controlled by housekeeper Teresa Reveles.

Was it Reveles that called 911 to get help for Richard Simmons? As his sole companion, she’s the likely source of the medical alert. Simmons phoned the TODAY show after the news story to assure fans that he’s not being held hostage by his housekeeper as the Daily New alleged.

Richard Simmons spoke on air via phone to TODAY’s Savannah Guthrie and said the talk of him being held captive in his home was ” very silly… Teresa Reveles has been with me for 30 years. It’s almost like we’re a married couple.”

Simmons added that he had a knee injury and restorative surgery and needed to recuperate but also added that he was tired of celebrity life and reassured concerned fans that “I do what I want to do as I’ve always done.”

Concern led someone to contact the LAPD anonymously last year and triggered a visit from officers to check on Richard Simmons but the officers reported that he was “in great health” and there were no concerns. So what’s going on now?

What caused Richard Simmons’ erratic behavior that led to the hospital trip? Is Simmons still at Cedars-Sinai or has he been released? Was the crisis medical or something else? Is Richard Simmons seriously ill? Should fans be worried?

Update: Richard Simmons has been released from hospital on Sunday according to TMZ – but there is no medical news at this time as to what if any diagnosis was made in hospital.