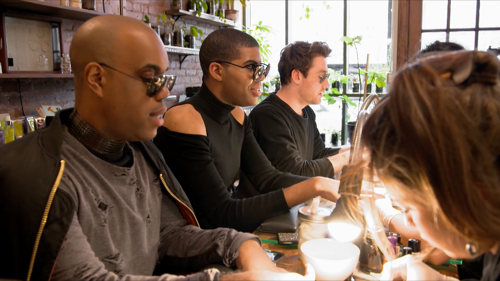 Tonight on E! Rich Kids of Beverly Hills continues with an all new May 22, season 4 episode 4 called, “#WakingUpInVegas”.  On tonight’s episode Morgan Stewart and Brendan Fitzpatrick learn that their wedding date may be doomed.

On the last episode, Dorothy helped EJ find love by “hunting” for eligible men on the streets of Rodeo Drive; Morgan apologized for her bridezilla ways, but new issues arise as she and Brendan realized they aren’t on the same page financially. Did you watch the last episode? If you missed it, we have a full and detailed recap right here for you.

On tonight’s as per the E! synopsis “Morgan and Brendan learn that their wedding date may be doomed; EJ decides to create his own business empire while also giving back to the LGBT community; Dorothy takes everyone to Las Vegas to celebrate her birthday; and Bianca’s diva behavior gets her in trouble.”

Brendan, Morgan and Susan meet up to pick out china patterns. Brendan seems overwhelmed and says “Where do we start?” Susan tells him to just walk around the store and take a look to see what they like. Brendan and Morgan have differing opinions about the china. Susan tells Morgan that one pattern she has picked out can’t be put in the dishwasher. Morgan says “Who do you expect to hand wash them?” Brendan says “You.” Morgan looks at him as if he has lost his mind. They leave the store promising Susan that they will be back. She says “Next time we come back we’ll be spot on.” Susan says “You have already done the hardest part.”

Dorothy meets with Jonny and Morgan. Morgan asks Dorothy what the deal is with Bianca. She is still upset about the comments that Bianca made about her wedding. She is also upset that Jonny heard about it before she did. Morgan tells Bianca “I don’t care what she has to say about my wedding because she is not invited, but the fact that she said it to you and you repeated it to Jonny before talking to me about it bothers me.” Dorothy tries to defend Bianca and says “I don’t think it was really that big a deal.” Morgan says “What do you know about this girl?” Dorothy says “She has never done anything to me and I like hanging out with her.”

EJ and Kyle meet with Glenda at the LGBT community center in New York to see how they can help out. Glenda gives them a tour and they are amazed at the art that has been painted. She then takes them to a library of archives where they meet a young man named Joseph who tells them “My mom was accepting of my sexuality but my dad was not.” EJ says “After meeting Joseph I realized that everyone’s coming out is different. My mom and my dad were both accepting when I came out.” Joseph says “I love EJ. He is so brash and out there and I admire that.”

Brendan and Morgan meet with Susan Miller to talk about their wedding date. Morgan asks “I am a Gemini and he is a Taurus so what does that mean for us?” Susan tells them that they are very compatible. They move on to talk about the wedding date itself. Morgan tells her “It is May 7th.” Susan says “It is not an ideal date for you to get married.” Morgan seems a bit shocked. Susan tells her “What I would suggest you do is to get married a couple months in advance and not tell anyone.” She also asks them if the wedding date is set in stone and if they have put down deposits. They tell her yes.

Their next meeting is with Desiree Jacobs. Brendan says “Planning a wedding is stressful. It is most stressful on the bride, but it is also stressful on the groom because he has to hear about it 24/7.” They are impressed with the invitations and love their look. Desiree says “We need to get the guest list narrowed down because we don’t want to be pressed for time.”

Dorothy is getting her group together to celebrate her birthday in Vegas. Morgan says “It is definitely weird to be here with Bianca after she has talked so much trash about my wedding, but we are going to put that aside and celebrate Dorothy’s birthday. Dorothy talks to Bianca and tells her “I thought that it would be weird when you saw Brendan.” Bianca says “If Brendan wants to talk to me he can call me and we can set up a time to do that.”

Morgan is talking to Jonny about her wedding. She tells him “I am seriously stressed about the whole thing and I have a million people calling me to make decisions.” Dorothy is talking to EJ about the situation between Brendan Bianca and Morgan. She says “They ask me how I can be friends with her, but she has always been cool with me.”

Morgan confronts Bianca about the comments that she made about her wedding. Morgan tells her “Everyone talks about everyone, but when it becomes a mutual discussion among our friends then it is a huge issue.” Bianca then confronts Morgan about the things she has been saying about Dorothy. Morgan says “I sometimes say things that I think are funny and they’re not. I feel so badly about what I said about Dorothy that I don’t even know where to start.” Bianca also tells Morgan “It sucks when your brother and your best friend call you a hooker. It was so two years ago and I want to move past it. If Brendan wants to talk to me about it then he can call me.” Morgan tells her “If you have something to say about me then you say it directly to me and I will do the same.” Bianca agrees.

Everyone is getting ready for the party. Bianca walks in and has extra security with her. Jonny and EJ are very upset about this. Jonny goes over and tells Bianca “Security has to leave. Dorothy overhears the conversation and goes over and tells her “Your security has to leave.” Bianca asks her “What are you jealous?” Dorothy tells her “I have people to watch out for us to. You don’t have to show up at my party with your own entourage.” Bianca gets upset and storms out of the room.

The group heads down to the club to start the party. Dorothy sneaks away from the party to go check on Bianca. Bianca refuses to open the door despite Dorothy’s pleas for her to come out and have a good time with them. Brendan tells Morgan “You and I are fighting over this wedding. All of our friends are here. Let’s just go to the chapel down the street and do it.” Everyone is super excited about the idea of Morgan and Brendan eloping. Dorothy asks Morgan “Are you going to be mad at us if we let you do this?” Jonny says “I don’t think this is a good idea.” Bianca says “I think Morgan is going to regret this in the morning.” Jonny says “I don’t think she will remember this in the morning.” As the ceremony starts Brendan interrupts and tells Morgan “I can’t wait to marry you and celebrate with all of our friends, but this is not the time or the place for us to get married. Continue with your planning and we will have our big wedding.” The group leaves the chapel and Morgan says “I can’t believe we made it into the chapel and down the aisle to even do this.”

The next day everyone is hung over. They all talk about the aborted elopement. Morgan tells her “I am your friend and if someone spoke to you the way she spoke to you last night in that bathroom you would have left the party and it would have been over.” Dorothy says “I can walk away from this friendship knowing that I did nothing to this girl and be done with it.”